Bromomethane, commonly known as methyl bromide, is an organobromine compound with formula CH3Br. This colorless, odorless, nonflammable gas is produced both industrially and particularly biologically. It has a tetrahedral shape and it is a recognized ozone-depleting chemical. It was used extensively as a pesticide until being phased out by most countries in the early 2000s.

Bromomethane originates from both natural and human sources. In the ocean, marine organisms are estimated to produce 1-2 billion kilograms annually.[2] It is also produced in small quantities by certain terrestrial plants, such as members of the Brassicaceae family. It is manufactured for agricultural and industrial use by reacting methanol with hydrogen bromide:

In 1999, an estimated 71,500 tonnes of synthetic methyl bromide were used annually worldwide.[3] 97% of this estimate is used for fumigation purposes, whilst 3% is used for the manufacture of other products. Moreover 75% of the consumption takes place in developed nations, led by the U.S (43%) and Europe (24%). Asia and the Middle East combine to use 24% whereas Latin America and Africa have the lowest consumption rates at 9%.[3]

Until its production and use were curtailed by the Montreal Protocol, bromomethane was widely applied as a soil sterilant, mainly for production of seed but also for some crops such as strawberries and almonds. In commercial large-scale monoculture seed production, unlike crop production, it is of vital importance to avoid contaminating the crop with off-type seed of the same species. Therefore, selective herbicides cannot be used. Whereas bromomethane is dangerous, it is considerably safer and more effective than some other soil sterilants. Its loss to the seed industry has resulted in changes to cultural practices, with increased reliance on soil steam sterilization, mechanical rogueing, and fallow seasons. Bromomethane was also used as a general-purpose fumigant to kill a variety of pests including rats and insects. Bromomethane has poor fungicidal properties. Bromomethane is the only fumigant allowed (heat treatment is only other option) under ISPM 15 regulations when exporting solid wood packaging (forklift pallets, crates, bracing) to ISPM 15 compliant countries. Bromomethane is used to prepare golf courses, particularly to control Bermuda grass. The Montreal Protocol stipulates that bromomethane use be phased out.

Bromomethane is also a precursor in the manufacture of other chemicals as a methylating agent, and has been used as a solvent to extract oil from seeds and wool.

Bromomethane was once used in specialty fire extinguishers, prior to the advent of less toxic halons, as it is electrically non-conductive and leaves no residue. It was used primarily for electrical substations, military aircraft, and other industrial hazards. It was never as popular as other agents due to its high cost and toxicity. Bromomethane was used from the 1920s to the 60s, and continued to be used in aircraft engine fire suppression systems into the late 60s. 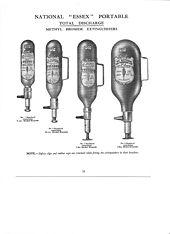 A selection of stored-pressure bromomethane fire extinguishers, circa 1930s-40s, UK

Bromomethane is readily photolyzed in the atmosphere to release elemental bromine, which is far more destructive to stratospheric ozone than chlorine. As such, it is subject to phase-out requirements of the 1987 Montreal Protocol on Ozone Depleting Substances.

The London Amendment in 1990 added methyl bromide to the list of ODS to be phased out. In 2003 the Global Environment Facility approved funds for a UNEP-UNDP joint project for methyl bromide total sector phase out in seven countries in Central Europe and Central Asia, due for completion in 2007.[4]

In New Zealand, bromomethane is used as a fumigant for whole logs destined for export. Environmental groups and the Green Party oppose its use.[7][8] In May 2011 the Environmental Risk Management Authority (ERMA) introduced new rules for its use which restrict the level of public exposure to the fumigant, set minimum buffer zones around fumigation sites, provide for notification to nearby residents and require users to monitor air quality during fumigations and report back to ERMA each year. All methyl bromide fumigations must use recapture technology by 2021.[9]

In the United States bromomethane is regulated as a pesticide under the Federal Insecticide, Fungicide, and Rodenticide Act (FIFRA; 7 U.S.C. 136 et seq.) and as a hazardous substance under the Resource Conservation and Recovery Act (RCRA; 42 U.S.C. 6901 et seq.), and is subject to reporting requirements under the Emergency Planning and Community Right-to-Know Act (EPCRA; 42 U.S.C. 11001 et seq.). The U.S. Clean Air Act (CAA; 42 U.S.C. 7401 et seq.). A 1998 amendment (P.L. 105-178, Title VI) conformed the Clean Air Act phase out date with that of the Montreal Protocol.[10][11] Whereas the Montreal Protocol has severely restricted the use of bromomethane internationally, the United States has successfully lobbied for critical-use exemptions. In 2004, over 7 million pounds of bromomethane were applied to California. Applications include tomato, strawberry, and ornamental shrub growers, and fumigation of ham/pork products. Also exempt is the treatment of solid wood packaging (forklift pallets, crates, bracing), and the packaged goods, being exported to ISPM 15 countries(to include Canada in 2012).

Has to phase out the use in agriculture by 2015.[citation needed]

"A TLV–TWA of 1 ppm (3.89 mg/m3) is recommended for occupational exposure to methyl bromide"-ACGIH 8 hour time weighted average. Immediately Dangerous To Life or Health Concentration by NIOSH: "The revised IDLH for methyl bromide is 250 ppm based on acute inhalation toxicity data in humans [Clarke et al. 1945]. This may be a conservative value due to the lack of relevant acute toxicity data for workers exposed to concentrations above 220 ppm. [Note: NIOSH recommends as part of its carcinogen policy that the "most protective" respirators be worn for methyl bromide at any detectable concentration.]" Detectable concentration by Drager Tube is 0.5 ppm.

Respiratory, kidney, and neurological effects are of the greatest concern. Scientists have investigated whether bromomethane exposure was linked to the death of four New Zealand port workers who died of neuro-degenerative motor neurone disease between 2002 and 2004 and found no connection.

Treatment of wood packaging requires a concentration of up to 16,000 ppm. An Australian Customs officer died of methyl bromide poisioning while inspecting a shipping container that was fumigated in the United States. Canada Border Services Officers avoided the same fate because a Mexican container of granite was fumigated with 98% methyl bromide and 2% chloropicrin fumigant, the chloropicrin has a tear-gas effect.

Expression of toxicity following exposure may involve a latent period of several hours, followed by signs such as nausea, abdominal pain, weakness, confusion, pulmonary edema, and seizures. Individuals who survive the acute phase often require a prolonged convalescence. Persistent neurological deficits such as asthenia, cognitive impairment, optical atrophy, and paresthesia are frequently present after moderate to severe poisoning. Blood or urine concentrations of inorganic bromide, a bromomethane metabolite, are useful to confirm a diagnosis of poisoning in hospitalized patients or to assist in the forensic investigation of a case of fatal overdosage.[13]