Norwegian University of Science and Technology

Norwegian University of Science and Technology

The Norwegian University of Science and Technology (Norwegian: Norges teknisk-naturvitenskapelige universitet), commonly known as NTNU, is located in Trondheim. NTNU is the second largest of the eight universities in Norway, and, as its name suggests, has the main national responsibility for higher education in engineering and technology. In addition to engineering and the natural and physical sciences, the university offers advanced degrees in other academic disciplines ranging from the social sciences, the arts, medicine, architecture and fine art.

NTNU was formed in 1996 by the merger of the Norwegian Institute of Technology (NTH) (1910), the College of Arts and Sciences (AVH), the Museum of Natural History and Archaeology (VM), the Faculty of Medicine (DMF), the Trondheim Academy of Fine Art and the Trondheim Conservatory of Music (MiT). Prior to the 1996 merger, NTH, AVH, DMF, and VM together constituted the University of Trondheim (UNiT), which was a much looser organization. However, the university's roots go back to 1760, with the foundation of the Trondheim Society, which in 1767 became the Royal Norwegian Society of Sciences and Letters. A group of Trondheim-based institutions including NTNU will celebrate a 250th Jubilee in 2010 to commemorate this history, while NTNU itself celebrates its centennial. 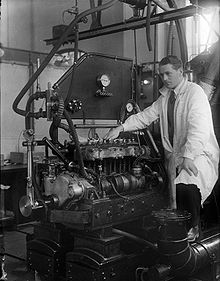 The celebration of NTNU's centennial year in 2010 has resulted in an enormous effort to expand the university's photo archive. Here, an engineering student from 1933, when the school was called the Norwegian Institute of Technology, shows off an engine presumably used in the course of his studies.

NTNU has several campuses in Trondheim, with Gløshaugen, for engineering and sciences, and Dragvoll, for humanities and social sciences as the main two. Other campuses include Tyholt for marine technology, Øya for medicine, Kalvskinnet for archaeology, Midtbyen for the music conservatory and Nedre Elvehavn for the art academy.

The university consists of seven faculties with a total of 53 departments and has approximately 20,000 students. Academic and administrative staff contribute 4,300 man-labour years of which 2,500 are in education and research. NTNU has more than 100 laboratories and is at any time running some 2,000 research projects. Students and staff can take advantage of roughly 300 research agreements or exchange programs with 58 institutions worldwide.

NTNU was ranked 24th in Europe and 116th in the World in 2011 in the Webometrics Ranking of World Universities, http://www.webometrics.info/top500_europe.asp?zoom_highlight=Norwegian for its presence on the web, the second highest ranking of any Norwegian university.

NTNU's overall budget in 2009 was 590 million euros, most of which (434 million euros) came from the Norwegian Ministry of Education.[1] Funding from the Research Council of Norway (NFR) totalled 73 million euros, an increase over 2008 of 12 percent.[2]

NTNU welcomes students from all over the world, and offers more than 30 master’s programmes that are taught in English. PhD programs are open to qualified applicants, and are paid staff positions that give candidates specific workplace rights and benefits under Norwegian law.

NTNU students have a clear presence in the city of Trondheim. The most famous student organization is the Studentersamfundet i Trondhjem, also known as "the red round house" after its architectural form; every other year it organizes a cultural festival UKA. Another festival organized by students is the International Student Festival in Trondheim ISFiT, which awards a student peace prize and draws internationally known speakers. The student sports organization, NTNUI, has roughly 10 000 members in its many branches,[8] with the largest groups including orienteering, cross-country and telemark skiing, but there are also groups for sports less common in Norway, like American football, lacrosse and aikido. A cabin and cottage organization owns several cabins in the countryside, available for students wishing to spend a few days away. There are also student fraternities, some of which conduct voluntary hazing rituals, which provide contact with potential employers and for social interaction between students. There are also alumni associations; religious and political organizations; clubs devoted to various topics such as innovation, human rights, beer, oatmeal, anime and computers; and The Association for Various Associations, which is a parody of the university's large number of student organizations.

NTNU's most visible living alumnus is Fred Kavli,[9] who graduated from NTH, one of NTNU's predecessors, and who founded The Kavli Foundation when he retired from a successful career as head of Kavlico Corp., one of the world's largest suppliers of sensors for aeronautics, automotive and industrial applications.[10]

The university's only living Nobel laureate is Ivar Giaever, who graduated from NTH in 1952, and won the Nobel Prize in Physics in 1973.[11] Lars Onsager, another NTH graduate (1925), won the Nobel Prize in Chemistry in 1968.[12] John Ugelstad (1921–1997) was a chemical engineer at the university who created monodisperse polymer beads, which are now widely used in medical technology.[13]

Other alumni of note are: