The Technical University of Denmark (Danish: Danmarks Tekniske Universitet), often simply referred to as DTU, is a university just north of Copenhagen, Denmark. It was founded in 1829 at the initiative of Hans Christian Ørsted as Denmark's first polytechnic, and is today ranked among Europe's leading engineering institutions, and the best engineering university in Scandinavia.[2]

The student union at DTU is the 161-year old Polyteknisk Forening.

DTU was founded in 1829 as the 'College of Advanced Technology' (Danish: Den Polytekniske Læreanstalt) with the physicist Hans Christian Ørsted, then a professor at the University of Copenhagen, as one of the driving forces. The inspiration was the École Polytechnique in Paris which Ørsted had visited as a young scientist. The new institution was inaugurated on 5 November 1829 with Ørsted as its principal, a position he held until his death in 1851.[3]

The College of Advanced Technology's premises in Sølvgade, completed 1889

The new college's first home was two buildings in Studiestræde and St- Oederstræde in central Copenhagen but although expanded several times they remained inadequate and in 1890 a new building complex was inaugurated in Sølvgade in 1890. The new buildings were designed by the architect Johan Daniel Herholdt.[3]

In 1903, the College of Advanced Technology commenced the education of electronics engineers in addition to the building engineers, production engineers and machine engineers already educated at the college.

In the 1920s, space had once again become insufficient and in 1929 the foundation stone was laid for a new school at Østervold. Completion of the building was delayed by World War II and it was not completed until 1954.[3]

From 1933, the institution was officially known as Danmarks tekniske Højskole (DtH), which usually was translated as the 'Technical University of Denmark'. Finally on 1 April 1994, in connection with the joining of Danmarks Ingeniørakademi (DIA) and DTH, the Danish name was changed to Danmarks Tekniske Universitet, in order to include the word 'University', thus giving rise to the acronym DTU by which the university is commonly known today. 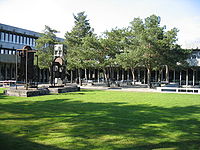 In 1960, a decision was made to move the College of Advanced Technology to new and larger facilities in Lyngby north of Copenhagen. They were inaugurated on 17 May 1974.[3]

The President of DTU is appointed by the university board. The president in turn appoints deans, and deans appoint heads of departments.

Since DTU has no faculty senate, and since the faculty is not involved in the appointment of president, deans, or department heads, the university has no faculty governance.[5]

The university is located on a plain known as Lundtoftesletten in the northeastern end of the city of Lyngby. The area was previously home to the airfield Lundtofte Flyveplads.

The campus is roughly divided in half by the road Anker Engelunds Vej going in the east-west direction, and, perpendicular to that, by two lengthy, collinear roads located on either side of a parking lot. The campus is thus divided into four parts, referred to as quadrants, numbered 1 through 4 in correspondence with the conventional numbering of quadrants in the Cartesian coordinate system with north upwards.

DTU was the subject of controversy in 2009 because the former institute director of the Department of Chemistry[6] was a high-ranking member of Scientology.[7] In relation to this, the university was accused of violating the principles of free speech by threatening to fire employees who voice their criticism of the institute director.[8][9][10][11][12] On 7 April 2010, his successor was announced, at a department meeting, as Erling Stenby,[13] who officially took over as Director on 1 May 2010.

In November 2007 the Times Higher Education Supplement put the university as number 130 in their ranking of the universities of the world and number 122 in 2010.[14]

Management and freedom of speech controversy

The head of department at DTU Chemistry, Ole W. Sørensen, has been the centre of several controversial events: An associate professor who had negotiated a bonus with the university, was threatened that the course she was teaching would be cancelled if she accepted the bonus. After she accepted the bonus, Ole W. Sørensen cancelled the course. A journalist covering the case reported that employees preferred to speak anonymously and without use of the university email system, but that only one employee, Rolf W. Berg, went on record by name, blaming the problems on the absence of a faculty role in the governance of DTU.[17]