A balance disorder is a disturbance that causes an individual to feel unsteady, for example when standing or walking. It may be accompanied by feelings of giddiness or wooziness, or having a sensation of movement, spinning, or floating. Balance is the result of several body systems working together: the visual system (eyes), vestibular system (ears) and proprioception (the body's sense of where it is in space). Degeneration of loss of function in any of these systems can lead to balance deficits.[1]

When balance is impaired, an individual has difficulty maintaining upright orientation. For example, an individual may not be able to walk without staggering, or may not even be able to stand. They may have falls or near-falls.[citation needed] When symptoms exist, they may include:

Some individuals may also experience nausea and vomiting, diarrhea, faintness, changes in heart rate and blood pressure, fear, anxiety, or panic. Some reactions to the symptoms are fatigue, depression, and decreased concentration. The symptoms may appear and disappear over short time periods or may last for a longer period.

Cognitive dysfunction (disorientation) may occur with vestibular disorders. Cognitive deficits are not just spatial in nature, but also include non-spatial functions such as object recognition memory. Vestibular dysfunction has been shown to adversely affect processes of attention and increased demands of attention can worsen the postural sway associated with vestibular disorders. Recent MRI studies also show that humans with bilateral vestibular damage undergo atrophy of the hippocampus which correlates with their degree of impairment on spatial memory tasks.[2][3]

Problems with balance can occur when there is a disruption in any of the vestibular, visual, or proprioceptive systems. Abnormalities in balance function may indicate a wide range of pathologies from causes like inner ear disorders, low blood pressure, brain tumors, and brain injury including stroke.[citation needed]

Many different terms are often used to describe what is collectively known as dizziness. Common descriptions include words such as lightheaded, floating, woozy, giddy, confused, helpless or fuzzy. Vertigo, Disequilibrium and Pre-syncope are the terms in use by most doctors.

Vertigo is a specific medical term used to describe the sensation of spinning or having the room spin about you. Most people find vertigo very disturbing and report associated nausea and vomiting.

Disequilibrium is the sensation of being off balance, and is most often characterized by frequent falls in a specific direction. This condition is not often associated with nausea or vomiting.

Pre-syncope is most often described as lightheaded or feeling faint. Syncope, by contrast, is actually fainting.

Related to the ear

Related to the brain

Brain related causes are less commonly associated with isolated vertigo and nystagmus but can still produce signs and symptoms, which mimic peripheral causes. Disequilibrium is often a prominent feature. 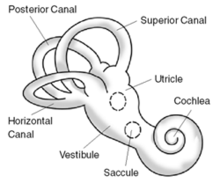 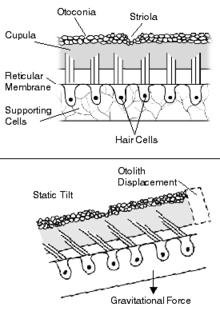 Illustration of the flow of fluid in the ear, which in turn causes displacement of the top portion of the hair cells that are embedded in the jelly-like cupula. Also shows the utricle and saccule-otolithic organs that are responsible for detecting linear acceleration, or movement in a straight line. 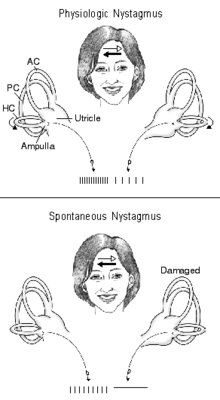 Movement of fluid in the semicircular canals signals the brain about the direction and speed of rotation of the head - for example, whether we are nodding our head up and down or looking from right to left. Each semicircular canal has a bulbed end, or enlarged portion, that contains hair cells. Rotation of the head causes a flow of fluid, which in turn causes displacement of the top portion of the hair cells that are embedded in the jelly-like cupula. Two other organs that are part of the vestibular system are the utricle and saccule. These are called the otolithic organs and are responsible for detecting linear acceleration, or movement in a straight line. The hair cells of the otolithic organs are blanketed with a jelly-like layer studded with tiny calcium stones called otoconia. When the head is tilted or the body position is changed with respect to gravity, the displacement of the stones causes the hair cells to bend.

The balance system works with the visual and skeletal systems (the muscles and joints and their sensors) to maintain orientation or balance. For example, visual signals are sent to the brain about the body's position in relation to its surroundings. These signals are processed by the brain, and compared to information from the vestibular, visual and the skeletal systems.

Diagnosis of a balance disorder is complicated because there are many kinds of balance disorders and because other medical conditions — including ear infections, blood pressure changes, and some vision problems — and some medications may contribute to a balance disorder. A person experiencing dizziness should see a physiotherapist or physician for an evaluation. A physician can assess for a medical disorder, such as a stroke or infection, if indicated. A physiotherapist can assess balance or a dizziness disorder and provide specific treatment.

The primary physician may request the opinion of an otolaryngologist to help evaluate a balance problem. An otolaryngologist is a physician/surgeon who specializes in diseases and disorders of the ear, nose, throat, head, and neck, sometimes with expertise in balance disorders. He or she will usually obtain a detailed medical history and perform a physical examination to start to sort out possible causes of the balance disorder. The physician may require tests and make additional referrals to assess the cause and extent of the disruption of balance. The kinds of tests needed will vary based on the patient's symptoms and health status. Because there are so many variables, not all patients will require every test.

There are various options for treating balance disorders. One option includes treatment for a disease or disorder that may be contributing to the balance problem, such as ear infection, stroke, multiple sclerosis, spinal cord injury, Parkinson’s, neuromuscular conditions, acquired brain injury, cerebellar dysfunctions and/or ataxia. Individual treatment will vary and will be based upon assessment results including symptoms, medical history, general health, and the results of medical tests. Most types of balance disorders will require balance training, prescribed by a physiotherapist. Physiotherapists often administer standardized outcome measures as part of their assessment in order to gain useful information and data about a patient’s current status. Some standardized balance assessments or outcome measures include but are not limited to the Functional Reach Test, Clinical Test for Sensory Integration in Balance (CTSIB), Berg Balance Scale and/or Timed Up and Go [6] The data and information collected can further help the physiotherapist develop an intervention program that is specific to the individual assessed. Intervention programs may include training activities that can be used to improve static and dynamic postural control, body alignment, weight distribution, ambulation, fall prevention and sensory function.[7]

Benign Paroxysmal Positional Vertigo (BPPV) is caused by misplaced crystals within the ear. Treatment, simply put, involves moving these crystals out of areas, which cause vertigo and into areas where they do not. A number of exercises have been developed to shift these crystals. The following article explains with diagrams how these exercises can be performed at the office or at home with some help: [1] The success of these exercises depends on their being performed correctly.

The two exercises explained in the above article are:

Treatment includes balance retraining exercises (vestibular rehabilitation). The exercises include movements of the head and body specifically developed for the patient. This form of therapy is thought to promote compensation for the disorder. Vestibular retraining programs are administered by professionals with knowledge and understanding of the vestibular system and its relationship with other systems in the body.

Sedative drugs are often prescribed for vertigo and dizziness, but these usually treat the symptoms rather than the underlying cause. Lorazepam (Ativan) is often used and is a sedative which has no effect on the disease process rather helps patients cope with the sensation.

Anti-nauseants, like those prescribed for motion sickness, are also often prescribed but do not effect the prognosis of the disorder.

Specifically for Meniere's disease a medication called Serc (Beta-histine) is available. There is some evidence to support it is effective to reduce the frequency of attacks. Also Diuretics, like Diazide (HCTZ/triamterene), are effective in many patients. Finally, ototoxic medications delivered either systemically or through the eardrum can eliminate the vertigo associated with Meniere's in many cases, although there is about a 10% risk of further hearing loss when using ototoxic medications.

Treatment is specific for underlying disorder of balance disorder:

Scientists at the National Institute on Deafness and Other Communication Disorders (NIDCD) are working to understand the various balance disorders and the complex interactions between the labyrinth, other balance-sensing organs, and the brain. NIDCD scientists are studying eye movement to understand the changes that occur in aging, disease, and injury, as well as collecting data about eye movement and posture to improve diagnosis and treatment of balance disorders. They are also studying the effectiveness of certain exercises as a treatment option.[10]

Other projects supported by the NIDCD include studies of the genes essential to normal development and function in the vestibular system. NIDCD scientists are also studying inherited syndromes of the brain that affect balance and coordination.

The NIDCD supports research to develop new tests and refine current tests of balance and vestibular function. For example, NIDCD scientists have developed computer-controlled systems to measure eye movement and body position by stimulating specific parts of the vestibular and nervous systems. Other tests to determine disability, as well as new physical rehabilitation strategies, are under investigation in clinical and research settings.

Scientists at the NIDCD hope that new data will help to develop strategies to prevent injury from falls, a common occurrence among people with balance disorders, particularly as they grow older.

This article is adapted from the public domain article at http://www.nidcd.nih.gov/health/balance/balance_disorders.asp