Public toilet
This article is about a room or building available for public use contains a toilet. For a room in a private house containing a toilet, see toilet (room). For the film, see Public Toilet (film). 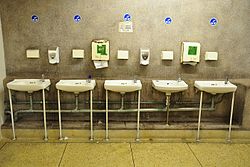 Sinks in the public toilet of the Castle Terrace Parking Garage, Edinburgh.

A public toilet (also called a bathroom, restroom, comfort room, powder room, toilet room, washroom, water closet, W.C., public lavatory) is a room or small building containing one or more toilets and possibly also urinals which is available for use by the general public, or in a broader meaning of "public", by customers of other services. Public toilets are commonly separated by gender into male and female facilities, although some can be unisex, particularly the smaller or single occupancy types. Increasingly, public toilets incorporate accessible toilets and features to cater for people with disabilities.

Public toilets may be unattended or be staffed by a janitor (possibly with a separate room), or attendant, provided by the local authority or the owner of the larger building. In many cultures it is customary to tip the attendant, while other public toilets may charge a small fee for entrance, sometimes through use of a coin operated turnstile. Some venues such as nightclubs may feature a grooming service provided by an attendant in the toilet.

They are typically found in railway stations, schools, bars, restaurants, nightclubs or filling stations as well as on longer distance public transport vehicles. Portable toilets are often provided at festivals and at temporary events for public use.

In American English, the term "restroom" usually denotes a public, commercial, or industrial personal hygiene facility designed for high throughput, whereas the term "bathroom" is used to denote a facility that is smaller and often in a residence, with lesser throughput (i.e., often for only one person at a time to use). The word "restroom" originated in the United States, but "bathroom" is now more commonly used. Some Americans prefer "restroom" over "bathroom" because public restrooms rarely have bathtubs. The word "washroom" is often used in the United States for a "laundry room" or utility room. In Canada, "washroom" is still the most common term used to refer to the room in the home, but items in the room may be described with the adjective "bathroom". This leads to the seeming paradox of the bathroom sink being located in the washroom. Public facilities, on the other hand, are always called "washrooms". As men's and ladies' facilities are not normally situated next to each other in Canadian department stores, however, it is more common for washrooms in those locations to be referred to simply as "the ladies' room" or "the men's room". The word "toilet" is normally used to refer only to the fixture itself; using it to refer to the room is often taken as a sign that the speaker is of low class. The word "washroom" is never used to mean "utility room" or "mud room" in Canada.

In Britain, Australia, Hong Kong (as "toilets"), Singapore (as "toilet") and New Zealand, the terms in use are "public toilet", "public lavatory" and more informally, "public loo". In South Africa, toilet and restroom are commonly used. A "bathroom" is a room containing a bath, a "washroom" is a room where you can wash your hands, and a "restroom" is where you go to rest if you are tired; none of which would necessarily contain a toilet. Public toilets were traditionally signed as "Gentlemen" or "Ladies", and as the Gents or the Ladies; these terms remain in colloquial use.

In non-English speaking Europe, either the local translation of "toilet" (for example "toilette" in French), or "WC" (abbreviation for "water closet") are common. In Germany, toilets in buildings such as hotels are often labelled with the room number "00".

In the rest of the world (usually Africa, Middle East, and Southeast Asia) "toilet" is used.[citation needed] 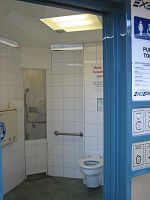 Some facilities are mobile, and can thus be put in place where and when needed, e.g., for a weekend at an entertainment venue. Additionally, some can be sunk into the ground (and thereby made inoperable), for the periods that they are not needed. The idea behind this is that some people do not like the sight of a public toilet in the street, and they are more easily hidden than repeatedly moved. This type is typically installed in entertainment areas and made operational during weekend evenings and nights.

A portable toilet is an outdoor public toilet with walls which can either be connected to the local sewage system or store the waste and be emptied from time to time. Many toilets can be cleaned on the spot, or at a central location in the case of a mobile toilet or urinal. In Europe, public toilets are also set up for cities as a compensation for advertising permits. They are part of a street furniture contract between the out-of-home advertising company and the city council. The reason for this combination is the shortage in city budgets.

Some public toilets have begun to be provided with flushable paper toilet seat covers which allow the user the comfort of knowing that they are not in contact with a surface previously used by a stranger. There is however no medical evidence that these prevent the spread of disease.[1]

Public toilets may be segregated by gender as indicated by written signs or pictograms of a man or a woman or may be available without distinction (see Gender-neutral toilet).

In restaurants, bars and night clubs, the identifications can be designed to match the decoration of the premises, using male and female figures or parts of the body, text, or even puns, making it difficult for some customers to identify them.[2]

Sex-separated public toilets are a source of difficulty for some people. For example, people with children of the opposite sex must choose between bringing the child into a toilet not designated for the child's gender, or entering a toilet not designated for one's own. Men caring for babies often find that only the women's washroom has been fitted with a change table. People with disabilities who need assistance to use the restroom have an additional problem if their helper is the opposite sex.

Sex-separated public toilets are often difficult to negotiate for transgendered people, who are often subject to embarrassment, harassment, or even assault or arrest by others offended by the presence of a person they interpret as being of the other gender (whether due to their outward presentation or their genital status). Transgendered people have been arrested for using not only toilets that correspond to their gender of identification, but also ones that correspond to the sex they were born with.

Some public places (such as facilities targeted to the transgendered or LGBT communities, and a few universities and offices) provide individual washrooms that are not gender-specified, specifically in order to respond to the concerns of gender-variant[clarification needed] people; but this remains very rare and often controversial.[3]

A significant number of facilities have additional gender-neutral public toilets for a different reason — they are marked not for being for females or males, but as being accessible to persons with disabilities, and are adequately equipped to allow a person using a wheelchair and/or with mobility concerns to use them.[original research?]

Amnesty International includes segregated toilets among the measures to ensure the safety of girls in schools.[4]

Separation by sex is so characteristic of public toilets that pictograms of a man or a woman are used to indicate where the respective toilets are. These pictograms are sometimes enclosed within standard forms to reinforce this information, with a circle representing a women's toilet and a triangle representing a men's facility.

A significant number of facilities have additional gender-neutral public toilets, also referred to as unisex bathrooms, to accommodate people with disabilities or elderly persons who may require assistance from a caregiver of the other gender.

There are also gender-neutral toilets in cases where sex-segregated ones are not practical, such as in trains and buses.

The architect Frank Lloyd Wright claimed to have "invented the hung wall for the w.c. (easier to clean under)" when he designed the Larkin Administration Building in Buffalo, New York in 1904.

The most beautiful and assumedly the most photographed public toilet in the world is in Kawakawa/New Zealand.[neutrality is disputed] This was designed by the famous Austrian artist Friedensreich Hundertwasser 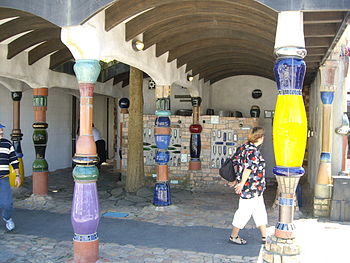 Modern public toilets often have a service entrance, utilities passages, and the like, that run behind all the fixtures. Wall-mount toilets that bolt on from behind the wall have replaced floor-mount toilets. Sensors are installed in a separate room, behind the fixtures. Usually the separate room is just a narrow corridor, or narrow passageway. Each sensor views through a small window into each fixture. Sometimes the metal plates that house the sensor windows are bolted on from behind, to prevent tampering. Additionally, all of the electrical equipment is safely behind the walls, so that there is no danger of electric shock. However, a RCCB must be (and usually is) still used for all such electrical equipment.

Service lighting consisting of windows that run all the way around the outside of the toilet uses electric lights behind the windows, to create the illusion of extensive natural light, even when the toilets are underground or otherwise do not have access to natural light. The windows are sometimes made of glass brick, permanently cemented in place. Lighting installed in service tunnels that run around the outside of the toilets provides optimum safety from electrical shock (keeping the lights outside the toilet), hygiene (no cracks or openings), security (no way for vandals to access the light bulbs), and aesthetics (clean architectural lines that maintain a continuity of whatever aesthetic design is present, e.g., the raw industrial urban aesthetic that works well with glass brick).

Older toilets do not often have service ducts and often in old toilets that have been modernized, the toilet cistern might be hidden in a purpose-built 'box' tiled over. Often old toilets might still have high-level cisterns in the service ducts. On the outside, the toilet will be flushed by a handle (just like an ordinary low-level cistern toilet) although behind the wall this handle will activate a chain. Sometimes a long flushing trough will be used to ensure that the cistern can be refilled quickly after dual flushes. This trend of hiding cisterns and fittings behind the walls started in the late 1950s in the United Kingdom and by the 1960s it was unusual for toilet cisterns to be visible in public toilets. In some buildings such as schools, however, a cistern can still be visible, although high-level cisterns had become old-fashioned by the 1970s and a lot of schools now have low-level cisterns.

Some toilets also function, in part, as changerooms, owing to their gender-segregated nature. For example, in beach areas, a portion of the building is equipped with benches so that persons can change into or out of their bathing suits.

Public toilets have been associated with graffiti, often of a transgressive, gossippy, or low-brow humorous nature (cf. toilet humour). The word latrinalia --from latrine 'toilet' and -alia, signifying a worthless collection—was coined to describe this kind of graffiti. A famous example of such artwork was featured on the album cover of the satirical Tony-award Broadway musical Urinetown, using felt tip pen scribblings.