The crab-eating fox (Cerdocyon thous), also known as the forest fox, wood fox, and the common fox, is an extant species of medium-sized canid endemic to the central part of South America and which appeared during the Pliocene epoch.[3] Cerdocyon comes from the Greek words kerdo (meaning fox) and cyon (dog) referring to the dog and fox- like characters of this animal. 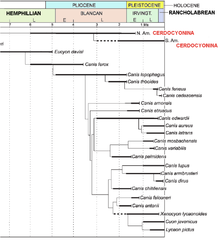 Cerdocyonina is a tribe which appeared around 6.0 Ma in North America as Cerdocyon avius becoming extinct by around 1.4—1.3 Ma. living about 4.7 million years. This genus carried on in South America from an undetermined time, possibly around 3.1 Ma and continues to present in the form or similar to the crab-eating fox.[4]

As one of the species of the tribe Canini, it is related to the Canis genus. It was theorized at present that the crab-eating fox's nearest relative is the Short-eared Dog. This, however, has to be supported by mitochondrial investigations (Pietrzak, 2007). Two subgenera (Atelocynus and Speothos) were long ago included in Cerdocyon.

The crab-eating fox is a canid that ranges in savannas, woodlands subtropical forests, prickly, shrubby thickets and tropical savannas such as the caatinga, llanos and campo. from Colombia and southern Venezuela to Paraguay, Uruguay and Northern Argentina. (Eisenberg, 1999)

Its habitat also includes wooded river banks such as Riparian forest. In the rainy season their range moves uphill, whilst in drier times they move to low ground (Nowak, 1999). Their habitat covers all environments except rainforests, high mountains and open grassy savannas. In some regions of their range they are threatened with extinction.

The crab-eating fox is predominantly greyish-brown with areas of red on the face and legs, and black-tipped ears and tail. It has short, strong legs and its tail is long and bushy. It may reach an adult weight of 10 to 17 pounds (4.5 to 7.7 kg). The head and body length averages 64.3 centimetres (25.3 in) and the average tail length is 28.5 centimetres (11.2 in) (Berta, 1982). This fox weighs between 5 to 8 kilograms (11 to 18 lb) (A. Hover; C Yahnke, 2003). It is mainly nocturnal and also is active at dusk, spending its day in dens that were dug by different animals. It hunts individually or lives in pairs, it eats crabs, lizards and different flying animals. It is easy to domesticate and farm, but its fur is not so highly valued as that of other species.

Short and thick fur. Coloration varies from grey - brown, to yellow air raid, to pale, navy-blue spotted, to dark grey. There is a black streak along the back legs with a black stripe along the back. On muzzle, ears and paws there is more reddish fur. Tail, legs and ear tips are black. The torso is somewhat narrow with strong short legs. The dense hairy tail stays upright when they are excited. The ears are wide and round.

Crab-eating fox creates monogamic teams, or small groups which hunt with several teams during the reproductive season. The population distribution is as follows: some explorers show one individual distribution for 4 km2. Berta (1982) shows one had changed from 0,6 to 0,9 km2 for one individual. Territorialism was noticed during the dry time; during rainy seasons, when there is more food, they pay less attention to territory (Nowak, 1999). Hideouts and dens often are founded in bushes and in thick grass, and there are several entrance holes. Despite being capable of tunnelling, they prefer to take over other animals' burrows. Hunting methods are adapted to type of prey. Several characteristic sounds are made by the crab-eating fox such as barking, whirring and howling, which occur often when pairs lose contact. Greetings include: tail waving, rolling over or folding the ears flat in a subordinate gesture. Returning group members begin a ritual of sniffing, tail lifting and mutual licking.

The adult female gives birth to one or two litters per year, and the breeding pair is monogamous. The pair ranges the plains together. As a tropical animal, reproduction is not fixed to certain times of year, and takes place twice yearly. The reproductive period most often begins in November or December, and July. The birth of offspring follows after a 56-day gestation, typically in January, February or sometimes March (Nowak, 1999). The number of cubs varies from three to six (Mendel, 1988). Newborns are toothless and blind (Berta, 1982). The eyes open after about fourteen days, and solid food is taken from thirty days after birth. Lactation lasts approximately 90 days (Nowak, 1999). The cubs' fur is dark gray above with a brighter underbelly. Both adult males and females look after cubs. From about twenty days, the cubs' fur becomes more like adults' coats, completing around thirty-five days. Sexual maturity occurs after nine months, after which territories are marked with urine (Berta, 1982; Mendel, 1988).

The crab-eating fox searches for crabs on muddy floodplains during the wet season giving this animal its common name. It is an opportunist and an omnivore preferring insects or meat from rodents and birds when available. Other foods readily consumed include turtle eggs, tortoises, fruit, eggs, crustaceans, insects, lizards, crabs and carrion. Field analysis shows a food distribution of 25% rodents, 24.1% reptiles, 0.6% marsupials, 0.6% rabbits, 10.3% birds, 35.1% amphibians and 5.2% fish. Different studies during the rainy season in Venezuela showed a distribution of 54% insects and 20% vertebrates, changing in the dry season to 48% vertebrates, 31% crabs and 16% insects. Their diet is varied and differs in different investigations, suggesting opportunistic feeding and geographical variation. During the wet season the diet contains more crabs and crustaceans, while during the dry season it contains more insects (Berta, 1982; Pietrzak, 2007). The crab-eating fox contributes to the control of rodents and harmful insects.

This fox is occasionally hunted, but the pelt is not valuable. The fox does not pose a danger to livestock. This is not currently a species of concern for conservation; however, its habitat is slowly shrinking due to human forces such as agriculture, as well as feral dogs' encroachment on its territory, though the population is still stable. Despite the low value of their pelts, these canids can often be killed by locals, though there have been no unambiguous proof that they attack farm animals. They are easy to domesticate, and often bred by local people. This does not, however, remove the threat to their population. The species is not protected at present. Despite this, they are in danger from a shrinking habitat through agricultural activity, as well as from feral dogs which can pose a threat for a number of species.

The Convention on International Trade in Endangered Species of Wild Fauna and Flora (CITES) lists the fox as not threatened by extinction - Appendix II (CITES, 2000). The IUCN lists the crab-eating fox as "Least Concern".[2]

The crab-eating fox has five recognized subspecies,[1] differing in sizes and coloring of fur (Bisbal, 1988).