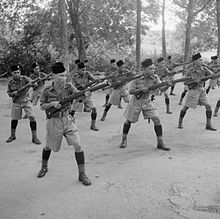 Circa October 1941, Malay Regiment operatives at a bayonet practice before the Battle of Singapore.

The first military units in Malaysia can be traced back to the Malay States Volunteer Rifles which existed from 1915 to 1936. The birth of the Malaysian Army came about when the Federal Council of the Federated Malay States passed the Malay Regiment Bill on 23 January 1933. This allowed the initial recruitment of 25 males for the First Experimental Malay Company on 1 March 1933. Major G. McI. S. Bruce of the Lincolnshire Regiment was the first Commanding Officer.

By 1 January 1935, the Experimental Company became The Malay Regiment with a complement of 150 men. A battalion was formed on 1 January 1938 and eventually a second battalion on 1 December 1941.

The 1st Bn Malay Regiment was famous for its defence of Opium Hill or Bukit Chandu in Singapore. The ‘Battle of Opium Hill’ on 14 February 1942 involved 42 soldiers commanded by Lt. Adnan Bin Saidi who defended their position against attack from the 18th Division of the Japanese Imperial Army under Lt. Gen. Renya Mutaguchi. After World War II and during the Malayan Emergency, the number of battalions was increased to 7 in the early 50s.

The Malaysian Army is currently organised into four Divisions and are placed under the Field Army Headquarters. Three of which (the 2nd, 3rd and 4th Divisions) are based in Peninsular Malaysia and the fourth (the 1st Division) is based in East Malaysia. The Grup Gerak Khas (Special Forces group), 10th Parachute Brigade and the Pasukan Udara Tentera Darat (army aviation) are independent formations and directly subordinate to the Chief of the Army.

The Malaysian Army currently has 17 Corps or Regiments in the organisation. These are grouped into 3 main components, the Combat Element, The Combat Support Element and the Support Elements.

Soldiers from the Malaysian Army secure a portion of jungle after arriving in a landing craft, air cushion, (LCAC) vehicle from USS Boxer (LHD-4) during Cooperation Afloat Readiness and Training (CARAT) Malaysia.

Officers are sub-divided into 3 groups:-

This group begins at Private (Prebet) and works its way up to Warrant Officer I (Pegawai Waran I). This is further subdivided into 3 groups.

Private (Prebet) Private soldiers in the Malaysian Army do not wear any rank devices on their uniform. There are no distinctions made between junior or senior Privates.

The unit currently has one squadron, No. 881 Squadron, equipped with 11 Agusta A109 LOH and 10 SA 316 Alouette III light helicopters. The main Army Air Corps base is located in Kluang, Johor.

Present strength of the Malaysian Army is approximately as follows:

Like most armed forces in the world, the Malaysian Army is in possession of numerous other weapons, mostly to be used by special forces units such as the Grup Gerak Khas or by soldiers with a special assignment such as snipers.[citation needed] 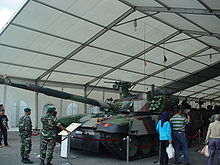 Since the recovery from the 1997 economic crisis, MA along with other branches of the MAF regains momentum in its modernizing programs. The first major procurement was to set a milestone by building its first ever main battle tank regiment. MA received delivery of 48 PT-91M main battle tanks and other tank based equipment like ARV WZT-4 from Poland, fully completed contract of sale in march 2010. Despite adding some 28 units of South African G5 Mk III 155 mm howitzers, another major procurement was 18 units of Astros MRLS from Brazil which delivery was completed in 2006. A second batch of 18 units MLRS was ordered in 2007.[8] MA is also rapidly mechanizing its current inventory where 211 Adnan IFVs (Infantry Fighting Vehicle) has been acquired by the army in 2004. Following a more recent procurement of the Pakistani Bakhtar-Shikan Anti-armor missile launcher, these were installed on the Adnans.

MA is now shifting its emphasis on enhancing its air wing. In September, 2006, MA had received its 11th and last Agusta-Westland A109H Light Utility Helicopter. These helicopters are to initially complement and ultimately replace the aging SA316B Aérospatiale Alouette III helicopters. 6 of them were to be installed with light arms and to be tasked to a scout observation unit; a sample was shown in LIMA 07. The configuration of the remainder is unclear. Furthermore, the army will also receive S61A-4 Nuri multipurpose helicopters after they are retired from RMAF to form the backbone for the army’s very first air transport unit. These helicopters will form the army air wing’s squadron 881 and squadron 882 respectively.

There is also a requirement for an upgrade to the current air defence network. However a dispute between the army and the air force on whether to introduce a mid-range SAM system had led the procurement to be on hold. According to a recent interview of the army’s chief of staff, Ismail bin Haji Jamaluddin, the army has no intention to take over the mid range air defence role.

Service With United Nations in Lebanon

The Malaysian Army might possibly deploy between 850 and 1,000 soldiers to Lebanon under the United Nations peacekeeping mandate. The deployment will be in concert with deployment of troops from Indonesia (850 troops) and Brunei (200 troops).[9] The International Stabilization Force in Southern Lebanon will only but only once a cease-fire is declared.[10] The Malaysian contingent will comprise troops from the 4th Mechanised Brigade. An observer group would earlier to gather information on the situation there.[11] The troops will fly out to Lebanon by military transport with their light equipments. Heavy equipment will be sent by ships of the Royal Malaysian Navy[12]

While Lebanon has wholeheartedly welcome Malaysia's presence, Israel has protested Malaysia’s participation in the peacekeeping force because Malaysia does not have diplomatic ties with Israel.[13][14] Malaysian Prime Minister Abdullah Ahmad Badawi (then fifth Prime Minister of Malaysia) said that only the United Nations can decide who should participate in the peacekeeping mission, and not by Israel.[15] Then-Malaysian Deputy Prime Minister Najib Razak have said Israel should have no say in the make-up of the force as the troops would not be stationed on Israeli territory. The Malaysian Foreign Minister, Syed Hamid Albar, echoed the view.

Unlike many other nations, there seems to be little interest from the local film industry to film movies touching on patriotism and the military in Malaysia. The dearth of these films and the growing concern over the lack of patriotism among younger generations of Malaysians pushed the Army to film a movie titled Leftenan Adnan in 2000. The movie was launched on 31 August 2001 by the then Yang di-Pertuan Agong of Malaysia. The movie had renewed interest among younger generations of Malaysians to take up a career in the military. Another reason for the increased interest was also that the financial crisis in 1997 had caused unemployment to rise significantly while the number of graduates kept on increasing from year to year. The next project was a 29-episode drama series called Insurgensi, starring Norman Hakim. The series was shown on RTM1 for about 13 episodes before it was suddenly discontinued. No reason has been given as to why the series was discontinued but it is believed that the army continues to push for its re-airing on prime time. The army continues to show the series to National Service recruits.