For the effects of military aviation on warfare, see Aerial warfare. 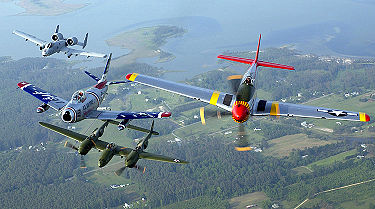 An A-10 Thunderbolt II, F-86 Sabre, P-38 Lightning and P-51 Mustang fly in formation during an air show at Langley Air Force Base, Virginia.

Military aviation is the use of aircraft and other flying machines for the purposes of conducting or enabling warfare, including national airlift (cargo) capacity to provide logistical supply to forces stationed in a theater or along a front. Air power includes the national means of conducting such warfare including the intersection of transport and war craft. The wide variety of military aircraft includes bombers, fighters, fighter bombers, transports, trainers, and reconnaissance aircraft. These varied types of aircraft allow for the completion of a wide variety of objectives.

Armed conflict has always been a catalyst for technological development, and the effect of war on aircraft development has been profound. The first military uses of aviation involved lighter-than-air balloons; in the Battle of Fleurus in 1794, the French successfully used the observation balloon l'Entreprenant to watch Austrian troop movements. The use of lighter-than-air aircraft in warfare became more prevalent in the 19th century, including regular use in the American Civil War. Lighter-than-air military aviation persisted into World War II, but became less used as heavier-than-air aircraft were improved. 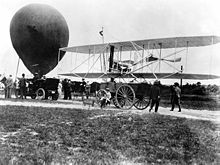 The Wright 1908 Model A Military Flyer arrives at Fort Myer, Virginia aboard a wagon, attracting the attention of children and adults.

Heavier-than-air aircraft were recognized as having military applications early on. A Wright Model A was purchased in 1909 by the U.S. Army Signal Corps, and in 1911 the Italians used a variety of aircraft types in reconnaissance, photo-reconnaissance, and bombing roles as part of the Italo-Turkish War. [1] The earliest military role filled by aircraft was reconnaissance, however, World War I saw military aviation rapidly embrace many specialized types, such as scouts, artillery observers, fighters, bombers, etc. World War II saw even more rapid advancement in aircraft technology, with large performance increases and the introduction of aircraft into an increasing number of roles. Aircraft also played a much larger role, with many notable engagements being decided through the use of military aviation, such as the Battle of Britain or the Attack on Pearl Harbor. Carrier aviation came to play a major role during World War II, with most major fleets realizing that the aircraft carrier was a much more potent weapon than the battleship, and devoting massive resources to the creation of new carriers and the destruction of enemy carriers. The introduction of the jet engine, radar, strategic bombing, and early missiles and computers are World War II advancements which are felt to the present day.

Post World War II, the development of military aviation was spurred less by massive military conflict and more by the tense stand-off between super-powers during the Cold War. The helicopter began to appear at the end of World War II and eventually matured into an indispensable part of military aviation. The need to continue to out-perform potential opponents meant that rapid development of new technologies and aircraft designs continued in the U.S.S.R. and the United States among others, and designs were tested in several conflicts, such as the Korean War and the Vietnam War. The 1980s through to the present day were characterized by incredible advances in electronics, stealth technology, and both offensive and defensive systems. Today, a country's military aviation forces are often the first line of defense against an attack, or the first forces to attack an enemy, and military aviation forces (or lack thereof) have proved decisive in several recent conflicts such as the Gulf War.

Bombers are normally larger, heavier, and less maneuverable than fighter aircraft. They are capable of carrying large payloads of bombs. Bombers are used almost exclusively for ground attacks and not fast or agile enough to take on enemy fighters head-to-head. A few have a single engine and require one pilot to operate and others have two or more engines and require crews of two or more.

The main role of Fighters is destroying enemy aircraft in air-to-air combat. Many are fast and highly maneuverable. They are capable of carrying a variety of weapons, including machine guns and guided missiles. Many modern fighters can attack from a great distance.

A Multirole combat aircraft can be a fighter or a bomber, depending on what the mission calls for. This term normally only applies to fixed-wing aircraft.

Reconnaissance aircraft are primarily used to gather intelligence. They are equipped with photographic, infrared, radar, and television sensors. Some are equipped with special electronic gear for detecting submarines, such as sonar, and others can give early warnings of enemy approach. This role is increasingly being filled by spy satellites and unmanned aerial vehicles.

Experimental aircraft aircraft are designed in order to test advanced aerodynamic, structural, avionic, or propulsion concepts. These are usually well instrumented, with performance data telemetered on radio-frequency data links to ground stations located at the test ranges where they are flown.

An air force is the branch of a nation's armed forces that is responsible for aerial warfare as distinct from the army, navy or other branch. Most nations either maintain an air force or, in the case of smaller and less well-developed countries, an air wing (see List of air forces). Air forces are usually tasked with the air defense of a country, as well as strategic bombing, interdiction, close air support, intelligence gathering, battlespace management and transport functions. Air force operations may also include space-based operations such as reconnaissance or satellite operations.

Other branches of a nation's armed forces may use aviation (naval aviation and army aviation) in addition to or instead of a dedicated air force.