caption=Italian soldiers watching over the corpses of several dead Arab Libyan defenders.
date=, ndash ,
place=
casus=
territory= and
result=Italian victory, start of the
combatant1=
combatant2=
commander1=Libyan theater:
commander2=Libyan theater:
strength1=100,000
strength2=24,000
casualties1=3,380 killed
4,220 wounded
casualties2=14,000 killed
5,370 woundedCampaign
name=Italian invasion of Libya
battles= The Italo-Turkish or Turco-Italian War (also known in Italy as "guerra di Libia", "the Libyan war", and in Turkey as "Trablusgarp Savaşı") was fought between the and the Kingdom of Italy from , to , .

As a result of this conflict, Italy was awarded the Ottoman provinces of , , and . These provinces together formed what became known as . In addition, the Italians were awarded the Isle of and the archipelago near .

Although minor, the war was an important precursor of the First World War as it sparked in the states. Seeing how easily the Italians had defeated the disorganized Ottomans, the members of the attacked the Empire before the war with Italy had ended.

The Italo-Turkish War saw numerous technological advances used in warfare; notably the aeroplane. On , , an Italian pilot flew over Turkish lines on a mission, and on , the first ever aerial bomb was dropped on Turkish troops in . [U.S. Centennial of Flight Commission: [http://www.centennialofflight.gov/essay/Air_Power/Pre_WWI/AP1.htm Aviation at the Start of the First World War] ]

It was also in this conflict that the future first president of and the hero of the , Mustafa Kemal () distinguished himself militarily as a young officer.

The claims of Italy over Libya dated back to discussions after the in 1878, in which France and Great Britain had agreed to the occupation of and respectively, both parts of the then declining Ottoman Empire. When Italian diplomats hinted about possible opposition by their government, the French replied that would have been a counterpart for Italy. In 1902, Italy and France had signed a secret treaty which accorded freedom of intervention in and . [cite web |url=http://www.thecorner.org/hist/wwi/alliance.htm |title=Alliance System / System of alliances |accessdate=2007-04-03 |format=html |work=thecorner.org ] However, the Italian government did little to realize the opportunity and knowledge of Libyan territory and resources remained scarce in the following years.

The Italian press began a large-scale lobbying campaign in favour of an invasion of Libya at the end of March 1911. It was fancifully depicted as rich in minerals, well-watered, and defended by only 4,000 Ottoman troops. Also, the population was hostile to the Ottoman Empire and friendly to the Italians. The future invasion was described as little more than a "military walk".

The Italian government was hesitant initially, but in the summer the preparations for the invasion were carried out and Prime Minister began to probe the other European major powers about their reactions to a possible invasion of Libya. The Socialist party had strong influence over public opinion. However, it was in opposition and also divided on the issue. It acted ineffectively against a military intervention. (Ironically, the future leader - at this time still a left-wing Socialist - took a prominent anti-war position.)

An ultimatum was presented to the Ottoman government led by the (CUP) party on the night of 26-27 September. Through Austrian intermediation, the CUP replied with the proposal of transferring control of Libya without war, maintaining a formal Ottoman . Giolitti refused, however, and war was declared on , .

Despite the time it had had to prepare the invasion, the Italian Royal Army ("Regio Esercito") was largely unprepared when the war broke out. The Italian fleet appeared off Tripoli in the evening of , but only began bombarding the port on . The city was conquered by 1,500 sailors, much to the enthusiasm of the interventionist minority in Italy. Another proposal of a diplomatic settlement was rejected by the Italians, and the Turks determined therefore to defend the province.

Turks did not have a full army in Trablusgarp. Many of the Ottoman officers had to travel there by their own means through Europe. They organized local Arabs and Bedouins for defense against the Italian invasion [M. Taylan Sorgun, "Bitmeyen Savas", 1972. Memoirs of Halil Pasa] .

The first disembarkation of troops occurred on . The Italian contingent of 20,000 troops was deemed sufficient to accomplish the conquest at the time. , and were easily conquered, but the same was not true for . The first true setback for the Italian troops happened on , when poor placement of the troops near Tripoli led them to be almost completely encircled by more mobile , backed by some Turkish regular units. The attack was portrayed as a simple by the Italian press, but it nearly annihilated much of the Italian expeditionary corps. The corps was consequently enlarged to 100,000 men who had to face 20,000 s and 8,000 Turks. The war turned into one of position. Even some of the earliest examples of utilization in modern warfare of armored cars [Crow, "Encyclopedia of Armored Cars", pg.104.] and air power by the Italian forces had little effect on the outcome. [Biddle, "Rhetoric and Reality in Air Warfare", pg.19.]

The , , near Dernah, 1,500 Libyan volunteers attacked Italian troops who were building es. The Italians - less in number, but superior in weapons - held the line. A lack of coordination between the Italian units sent from Dernah in reinforcement and the intervention of Turkish threatened the Italian line and the Arabs attempted to surround the Italian troops. Further Italian reinforcements, however, were able to stabilize the situation, and the battle ended in the afternoon.

On , the Italian command sent three columns of to disband the Arab Turkish camp near Dernah. The Italian troops occupied a , interrupting Turkish s. Three days later, the Turkish commander, , attacked the Italian positions on the plateau. The larger Italian fire drove back the Turkish soldiers, who were surrounded by a battalion of and suffered heavy losses. A later Turkish attack had the same outcome.

After that, operations in ceased until the end of the war.

Moves towards a peace 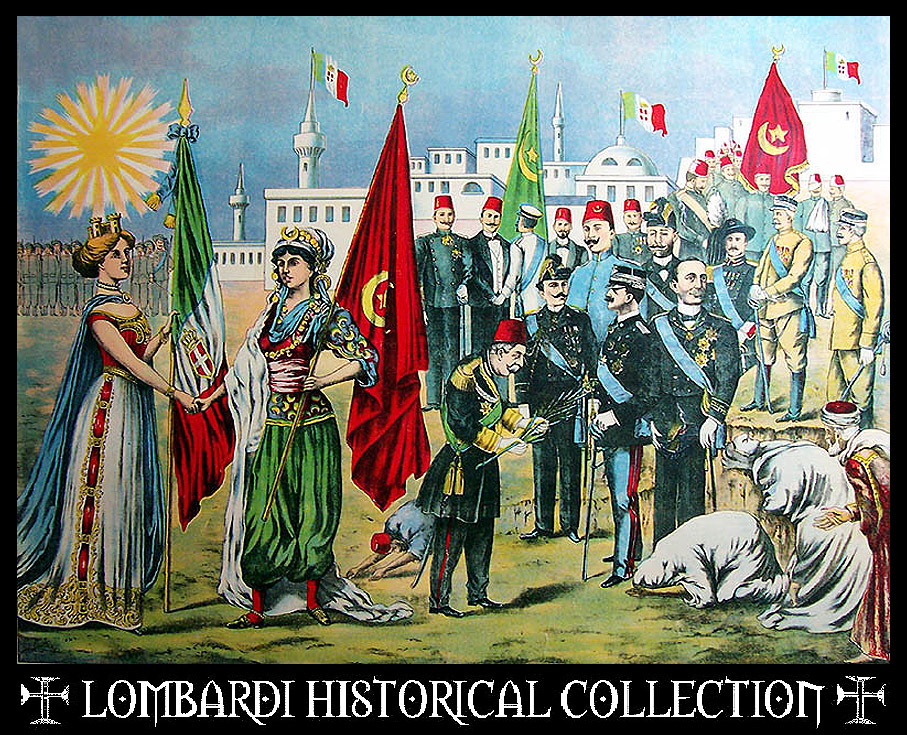 thumb|300px|right|">
1912 Italian-American chromolithograph showing a fanciful depiction of the Italian-Turkish Peace treaty. Titled, 'LA PACE ITALO-TURCA'.
With a decree of , 1911, Italy declared its suzerainty over Libya, although it controlled only some coastal stretches which were almost under siege by the local troops, with the exception of Tripoli. Italian authorities adopted many repressive measures against the s, such as .

Italy, however, maintained total supremacy and could extend its control to almost all of the 2,000 km of the Libyan coast between April and early August 1912. Italy began operations against the Turkish possessions in the with the approval of the other powers that were eager to end a war that was lasting much longer than expected. Italy occupied twelve islands in the sea, the so-called , but this raised the discontent of the Austro-Hungarian Empire who feared that this could fuel the of nations such as and , causing unbalance in the already fragile situation in the area.

The 1912 Treaty of Lausanne

Italian diplomats decided to take advantage of the situation to obtain a favorable peace deal. On , , Italy and the Ottoman Empire signed a treaty in near Lausanne (the First Treaty of Lausanne) [ [http://links.jstor.org/sici?sici=0002-9300(191301)7%3A1%3C58%3ATOPBIA%3E2.0.CO%3B2-R Treaty of Peace Between Italy and Turkey ] The American Journal of International Law, Vol. 7, No. 1, Supplement: Official Documents (Jan., 1913), pp. 58-62doi:10.2307/2212446] [ [http://www.mtholyoke.edu/acad/intrel/boshtml/bos142.htm Treaty of Lausanne, October, 1912.] ] . The terms were formally equal to those requested by at the beginning of the war and maintained a formal Ottoman suzerainty over Libya, which received only a semi-autonomous status under the rule of s elected by the .

The invasion of Libya was a costly enterprise for Italy. Instead of the 30 million lire a month judged sufficient at its beginning, it reached a cost of 80 million a month for a much longer period than was originally estimated. This caused economical imbalance at home. From a political standpoint, it showed that the lobbying power of an active and organized minority could have great power in the country, as the advent of would show after .

As for Libya, the Italian control over much of its territory remained ineffective until the late 1920s, when forces under the Generals and waged punitive pacification campaigns which turned into brutal and bloody acts of . Resistance petered out only after the execution of the rebel leader on , .

Because of WWI, the islands remained under Italian . According to the 1920 , Italy was supposed to cede most of the islands (except ) to Greece, in exchange for a vast Italian zone of influence in southwest .

Yet the Greek defeat in the Greco-Turkish War and the foundation of modern Turkey created a new situation that made the enforcement of the terms of this treaty impossible. In article 15 of the 1923 , which superseded the 1920 , Turkey formally recognized the Italian annexation of the islands. [ [http://wwi.lib.byu.edu/index.php/Treaty_of_Lausanne Treaty of Lausanne, July 24, 1923.] ]