The armed forces of Paraguay consist of the Paraguayan army, navy (including naval aviation and marine corps) and air force.

The constitution of Paraguay establishes the president of Paraguay as the commander-in-chief.

Paraguay has compulsory military service, and all 18-year-old males and 17-year-olds in the year of their 18th birthday are liable for one year of active duty. Although the 1992 constitution allows for conscientious objection, no enabling legislation has yet been approved.

In July 2005, military aid in the form of U.S. Special Forces began arriving at Paraguay's Mariscal Estigarribia air base, a sprawling complex built in 1982.[1][2] 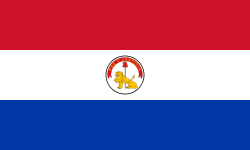 Each corps has a weapons school run by its command. The logistical command manages 10 addresses materials, mobilization, health care, etc. The command of the Army Institute of Education administers three schools, commissioned and noncommissoned officers, a military academy, and the CIMEFOR (a center for pre-military study that trains Reserve officers).

Each of the nine divisions that make up the three corps has one or two regiments of infantry or cavalry, its platoon of engineers, its communications section, military police units, etc.

Order of Battle of the Paraguayan Army 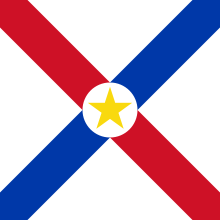 Although Paraguay is a landlocked country, it has a strong naval tradition by virtue of the fact that it has access to the Atlantic Ocean through the Paraguay–Paraná rivers. The Paraguayan Navy has six bases. The main base is the Puerto Saxony in Asuncion, followed by Bahia, Negra, Ciudad del Este, Encamacion, Salto del Guaria. Ita-Peru. It also has facilities in Puerto Saxony for helicopters and airplanes in SGAS. Naval personnel including Marine Corps aviation personnel, and the naval guard equal about 1,950. The Marine Corps have 800 marines, of which 400 are assigned to one commando unit with the rest being organized into a single battalion consisting of three companies.

In terms of vessels, the Navy has 34 surface ships, some of which will soon reach centenarian age. (This is due in part to limited use and floating in fresh water.) The main vessels and the flagship of the Paraguay is still the Humaita, which was commissioned prior to Paraguay's involvement in the Chaco War. It has a further four patrol vessels, of which the oldest was commissioned in 1908 and the newest in 1985. The Navy has 17 patrol boats of various drafts, four of which were donated by Taiwan and the USA, while the other 13 were built locally. The rest of the fleet is composed of tug boats, barges, landing craft, transports, and a presidential yacht.

The core assets of Paraguay's naval aviation wing are 2 attack helicopters, the Aeschylu Eurocopter AS350. It also has 6 training and liaison Cessna airplanes.

The air force, the newest and smallest of the services, has about 1,100 personnel. The Paraguayan Air Forces is organised in an Air Brigade of seven air groups and a brigade of paratroopers on battalion level. Almost all operating units are based in premises at Silvio Pettirosi internacional airport (SGAS) in Asuncion.

The units compromising the force are: the Aerotactico group (TAG) with three fighter squadrons (numbered 1 to 3), respectively equipped with the MB-326, T-33 and EMB-312.It is noteworthy that the first two are in storage or operating either by withdrawal of this aircraft. The squadron "Moros", equipped with Tucanos, has only one squadron (3 airplanes active). The Air Transport Group (GTA) operates aircraft of the CASA, DHC-6, and Beechcraft types. The Helicopter air group (HLG) has a SAR squadron, a utility squadron, and a squadron of attack craft, and is equipped with ex-Taiwanese UH-1H and Brazilian HB-350B aircraft. The Air Group Instruction (AFI) has materials and T-25 and T-35 aircraft. Photogrammetric called air group (GAF) and group aviation maintenance section (SEMAER) do not have aircraft assigned. The Parachute Brigade operates CASA aircraft.

Besides these groups is a command of Institutes of Education and one of regions air, this latter has nominal jurisdiction over 12 tracks and airports as six of these are considered Air Bases.[3]

The stars worn by Army and Air Force lieutenants (Sub-Teniente, Teniente, Teniente 1ro) and captains are silver in color. The ones worn by the Major, Lieutenant Colonel and Colonel are gold. The army officers branch is denoted by the color of circular pads under the stars, which is also the same color used for the chevron. Red denotes branches such as Infantry and Artillery, while Cavalry is denoted by a pink. A darker red denotes support branches such as Engineering Corps, Communications, and Intelligence. Green means Supply and Transportation, while purple is reserved for the Medicine Branch. Generals' special chevron consists of a woven depiction of the olive and palm found in the national emblem in gold threads. 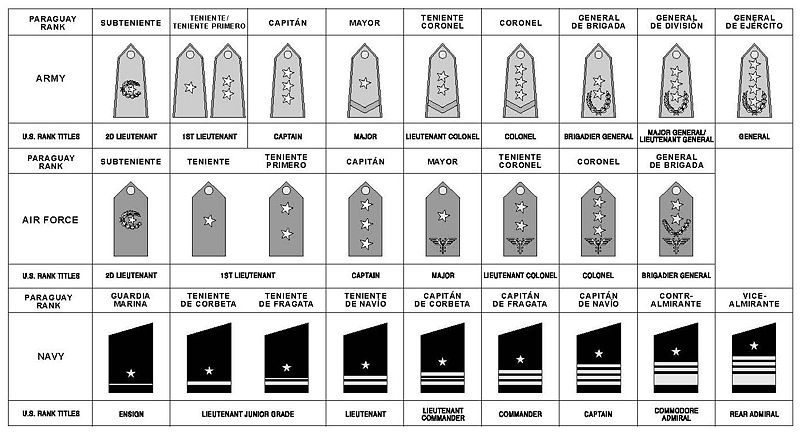 As in the case of the army officers, the army enlisted branch is denoted by the color of their chevrons and bars. The colors and meanings are the same as the ones explained above. 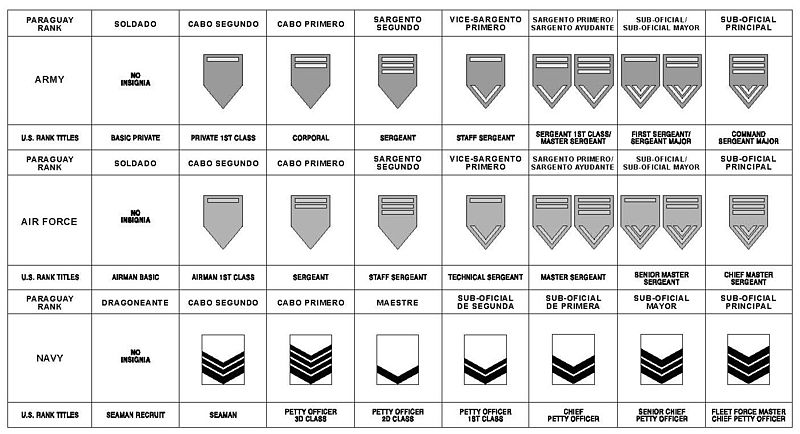