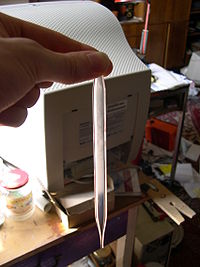 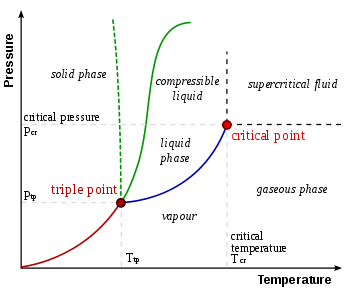 The vapor–liquid critical point in a pressure–temperature phase diagram is at the high-temperature extreme of the liquid–gas phase boundary. The dotted green line gives the anomalous behaviour of water.

For pure substances, there is an inflection point in the critical isotherm (or temperature contour line) on a pV diagram. This means that at the critical point:

This relation can be used to evaluate two parameters for an equation of state in terms of the critical properties.

Sometimes a set of reduced properties are defined in terms of the critical properties, i.e.:[2]

Critical variables are useful for rewriting a varied equation of state into one that applies to all materials. The effect is similar to a normalizing constant. The principle of corresponding states indicates that substances at equal reduced pressures and temperatures have equal reduced volumes. This relationship is approximately true for many substances, but becomes increasingly inaccurate for large values of pr

Table of liquid–vapor critical temperature and pressure for selected substances

The existence of a critical point was first discovered by Thomas Andrews in 1869 for carbon dioxide. He showed that CO2 could be liquefied at 31oC at a pressure of 73 atm, but not at slightly higher temperatures even under very much higher pressures (to 3000 atm).

A plot of typical polymer solution phase behavior including two critical points: an LCST and a UCST.

According to renormalization group theory, the defining property of criticality is that the natural length scale characteristic of the structure of the physical system, the so-called correlation length ξ, becomes infinite. This effect is the cause of the critical opalescence that is seen as the liquid–liquid critical point is approached in a binary fluid mixture. There are also lines in phase space along which this happens: these are critical lines.

The critical point is described by a conformal field theory.