/ˈmɔːdlɪn/ mawd-lin)[1] is one of the constituent colleges of the University of Oxford in England. As of 2006 the college had an estimated financial endowment of £153 million.[2] Magdalen is currently top of the Norrington Table after over half of its 2010 finalists received first-class degrees, a record score for any college.[3] Five Magdalen alumni are currently members of the Conservative-Liberal Democrat Cabinet.[4]

Magdalen College was founded in 1458 by William of Waynflete, Bishop of Winchester.[5] The founder's statutes included provision for a choral foundation of men and boys (a tradition that has continued to the present day) and made reference to the pronunciation of the name of the College in English. The college received another substantial endowment from the estate of Sir John Fastolf of Caister Castle in Norfolk (1380–1459). Another unrelated college named Magdalen Hall adjacent to Magdalen College eventually became part of Hertford College.[6]

Regarded by some as one of the most beautiful of the Oxford and Cambridge colleges,[7] Magdalen is also one of the most visited. It stands next to the River Cherwell and has within its grounds a deer park and Addison's Walk. Magdalen College School also lies nearby. The large, square Magdalen Tower is a famous Oxford landmark, and it is a tradition since the days of Henry VII that the college choir sings from the top of it at 6 a.m. on May Morning.[7] The college's current president, Professor David Clary FRS, was earlier a Fellow and Senior Tutor at Magdalene College, Cambridge.

The college has large grounds, close to the city centre. They stretch north and east from the college, and are most of the area bounded by Longwall Street, the High Street (where the porter's lodge is located), and St Clement's. 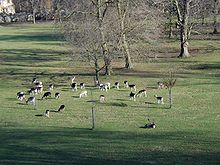 The deer in the Grove

In the 16th century, long before the introduction of the deer, the grove consisted of gardens, orchards, and bowling greens. During the Civil War, it was used to house a regiment of soldiers. At one point in the 19th century it was home to three traction engines belonging to the works department of the college. By the 20th century it had become well-wooded with many large trees, but most of them were lost to Dutch Elm Disease in the 1970s.

The Meadow (bounded by Addison's Walk)

This triangular meadow lies to the east of the college, bounded on all sides by the River Cherwell. In the spring, it is filled with the flower Fritillaria meleagris (commonly known as Snakeshead Fritillary), which gives it an attractive green-purple colour. These flowers grow in very few places, and have been recorded growing in the meadow since around 1785. Once the flowering has finished, the deer are moved in for the Summer and Autumn. In wet winters, some or all of the meadow may flood, as the meadow is lower lying than the surrounding path. All around the edge of the meadow is a tree-lined path, Addison's Walk. It is a beautiful and tranquil walk, favoured by students, dons, and visitors alike. It also links the college with Holywell Ford, and the Fellows' Garden. 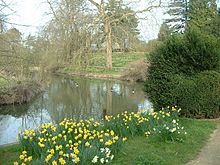 Located to the north east of the Meadow, directly behind the new building of the Oxford Centre for Islamic Studies. This long and (fairly) narrow garden follows the Cherwell to the edge of the University Parks . In spring, the ground is covered with flowers. In summer, there are some flowers, many different shrubs, and the varied trees provide dappled cover from the sun. It is linked to Addison's Walk by a bridge.

The Great Tower was built between 1492 and 1509 by William Orchard, and is an imposing landmark on the eastern approaches to the city centre. The hall and chapel were built at similar times, though both have undergone some changes in the intervening years. 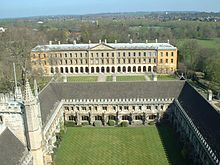 The cloister and the New Building

The Cloister or Great Quad was built in 1474-80 (also by Orchard) and has been altered several times since then. In 1822, the north side was in bad shape, and was knocked down while most of the fellows were away from college (only a small group of fellows were in favour of demolishing it). It was rebuilt shortly afterwards. In the early 1900s, renovations were performed, and it was returned to a more mediaeval character. Student rooms were installed in the (very large) roof space in the 1980s.

The New Building was built across a large lawn to the north of the Great Quad beginning in 1733. Its spacious setting is due to the builders' intentions to create an entirely new quad, but only one side was completed. C. S. Lewis had his rooms in this building, and as there are very few student rooms (many being occupied by tutors), they are highly sought after. 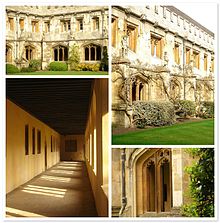 The college has four other quads. The irregularly shaped St John's Quad is the first on entering the college, and includes the Outdoor Pulpit and old Grammar Hall. It connects to the Great Quad via the Perpendicular Gothic Founder's Tower, which is richly decorated with carvings and pinnacles and has carved bosses in its vault.

The Chaplain's Quad runs along the side of the Chapel and Hall, to the foot of the Great Tower. St Swithun's Quad and Longwall Quad (which contains the Library) date from the late 19th and early 20th centuries, and make up the southwest corner of the college. The Grove Buildings are the newest, built in the 1990s in a traditional style.

The chapel is a place of worship for members of the college and others in the university community and beyond. Its tradition is influenced by the Catholic Revival in the Church of England. Said and sung services are held daily during term. The choir sings Choral Evensong every day at 6pm except on Mondays. On Sundays, Sung Mass is offered in the morning at 11am and Compline (Night Prayer) and Benediction is sung congregationally to plainsong at 10pm. Mass is also sung on major holy days. 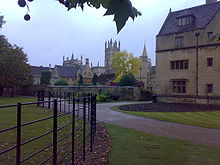 A view towards the front of Magdalen College, including the Great Tower, from behind the residences. 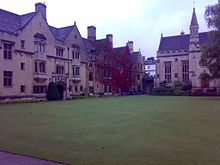 A view from the Longwall Quad, towards the High Street wall of the college and the library. 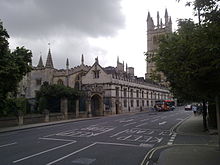 Magdalen College as seen from the south side of the High Street, adjacent to the Botanic Gardens.

Magdalen is one of the four Choral Foundations in Oxford, meaning that the formation of the choir was part of the statutes of the college, the other three choral foundations being New College, Christ Church, and, since 2007, Merton College.

The choir consists of twelve Academical Clerks who are students at the College, and sixteen boys aged seven to fourteen, all of whom have scholarships at Magdalen College School. The school was originally founded for this express purpose but has long since become an independent public school.

The choristers' day begins at 7:30, with an early morning practice before school. There is further practice immediately after school, followed by Choral Evensong six nights a week, in term; the Tuesday service is sung by the boys only, and the Friday service only by the Academical Clerks. On Sundays there is a practice at 09:30 followed by Eucharist, then a further afternoon practice followed by Evensong which ends at 7pm. As of September 2010, the choristers no longer sing on most Saturday evenings following the formation of the 'Consort of Voices', a mixed voice choir which sings on most Saturdays in full term.

The Choir has numerous College duties as well as a recording and touring schedule. Traditionally the Choir sings at College Gaudies and at other special events throughout the year, as well as performing on social occasions such as Carols by Candlelight before Christmas and the famous May Morning. On this occasion the Choir sings madrigals at 6am from the top of the college bell-tower to the assembled mass of students and townsfolk celebrating in the streets below.

In its long history the choir has had many well known organists, such as Daniel Purcell, Sir John Stainer and Bernard Rose. Among the other notable former directors and masters of the choir, who hold the title of Informator Choristarum, are John Sheppard, Sir William McKie and Haldane Campbell Stewart. Past Organ Scholars include Dudley Moore, and past Academical Clerks include John Mark Ainsley, Harry Christophers (founder and director of The Sixteen) and Robin Blaze. The former Informator Choristarum was the composer Dr Bill Ives, possibly better known as a former King's Singer. A disc of his music, Listen Sweet Dove, is amongst the choir's latest releases. The College has recently appointed organist Daniel Hyde as Informator Choristarum.

The choir records regularly and In 2005 was nominated for a prestigious Grammy Award for its CD, With a Merrie Noyse, of music by Orlando Gibbons. Other recent works include the BBC's Blue Planet and Paul McCartney's classical piece Ecce Cor Meum.

Centre for the History of Childhood

Centre for the History of Childhood, situated at Magdalen College, is the first institution within the United Kingdom that focuses on studying every interdisciplinary aspect of the history of children from the Greeks and Romans to the present day.[10]

Magdalen College has a strong drama scene, organised by the Magdalen Players.[11]

A College Stamp was issued in the 1960's and the 1970's to prepay a local delivery of mail by the college porters. It was short-lived and only a few stamps exist.[12]

Old members who are current Members of Parliament

Other alumni in Parliament are:

The politics tutor Stewart Wood is a Labour peer.