The famous club Pegasus of the 1950s was formed from the Oxford and Cambridge University teams.

Twenty-two Oxford players were capped for England, including three of the team which took part in the first FIFA-recognized international match, Frederick Chappell, Arnold Kirke-Smith and Cuthbert Ottaway. 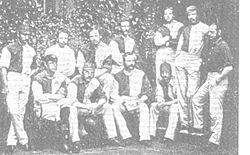 Oxford University A.F.C.'s F.A. Cup winning side of 1874. Captain Cuthbert Ottaway sits at the extreme left of the front row.

The full list of England players (with the number of caps received whilst registered with Oxford University A.F.C.) were[2]:

The following five players were capped for Wales whilst registered with Oxford University A.F.C.[3]: