Evening Prayer is a liturgy in use in the Anglican Communion (and other churches in the Anglican tradition, such as the Continuing Anglican Movement and the Anglican Use of the Roman Catholic Church) and celebrated in the late afternoon or evening. It is also commonly known as Evensong, especially (but not exclusively) when the office is rendered chorally (that is, when most of the service is sung). It is roughly the equivalent of Vespers in the Roman Catholic Church and the Lutheran churches, although it was originally formed by combining the Roman Catholic offices of Vespers and Compline. Although many churches now take their services from Common Worship or other modern prayer books, if a church has a choir, Choral Evensong from the Book of Common Prayer often remains in use because of the greater musical provision. Evening Prayer, like Morning Prayer (Mattins) and in contrast to the Eucharist, may be led by a layperson, and is recited by some devout Anglicans daily in private (clergy in many Anglican jurisdictions are required to do so).

Service in prayerbooks in the tradition of 1662

The service of Evening Prayer, according to traditional prayer books such as the 1662 English or 1959 Canadian Book of Common Prayer, is similar in structure to the equivalent Morning Prayer (or Mattins), but with different canticles and with evening-specific collects. It is made up of the following elements:

If the service is accompanied the church organ will normally be played before and after the service. Many institutions have regular unaccompanied evensongs: at Durham Cathedral, Exeter Cathedral and Ripon Cathedral, as well as the Chapels of New College, Oxford and King's College, Cambridge, for example, Friday evensongs are usually sung to a cappella settings of the liturgy.

A further variation to the standard rendering of choral evensong is mens' voices services. In institutions where the choir is made up of adult men (who sing the alto, tenor and bass parts) and trebles (boy or girl choristers) who sing the upper-most part(s), one day a week the service may be sung by men only. When this occurs, the musical settings are for alto, tenor and bass voices only. At Durham Cathedral, it is the norm for Thursday evenings to be sung by the gentlemen of the choir.

In practice, the penitential introduction is often omitted, especially at sung services. A sermon or homily may be preached at the end on Sundays or feast days, but does not form a set part of the liturgy. Also, one or more congregational hymns may be added to the service. In Anglo-Catholic churches, Benediction of the Blessed Sacrament frequently follows Evensong.

Service in prayerbooks influenced by the liturgical renewal movement 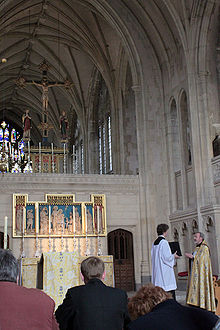 Solemn Evensong in the Chapel of the Resurrection, Pusey House, Oxford.

In the Episcopal Church, like the Eucharist, the Burial of the Dead, and A Penitential Order, Morning and Evening Prayer are given in the 1979 US Book of Common Prayer in two forms: "Rite One" and "Rite Two".

Rite One is a modified version of the traditional order for Evening Prayer. It is somewhat similar to the traditional Prayer Book rite, but the Confession of Sin has been truncated, the Phos Hilaron may be said, and only one reading need be used. The Magnificat and Nunc dimittis may both be used, or one of them may be used, or an alternative canticle may be used. Rite One is based on the 1928 Prayer Book and is also found in the Anglican Service Book, a traditional language adaption of the 1979 Book of Common Prayer.

Rite Two is substantially similar, but is rendered in modern language.

The American Book of Common Prayer also offers an "Order of Worship for the Evening", which may be used as a service in itself or as an introduction to Evening Prayer.

The Book of Alternative Services of the Anglican Church of Canada provides a simple version of Evening Prayer. The service may begin with the Service of Light or the Penitential Rite. Otherwise, it commences with the Preces and the Phos Hilaron. The Psalms are said followed by one or more readings and one or more canticles. The Apostle's Creed or the Summary of the Law is said, and then Intercessions and Thanksgivings may be offered. The Collect of the Day may follow. The service concludes with the Lord's Prayer and Dismissal.

A special form of Evensong, the "Vigil of the Resurrection" is provided for use on Saturdays.

Common Worship: Daily Prayer offers a contemporary form of the liturgy. After the opening versicle, a hymn, prayer, and/or canticle are said or sung. A prayer is followed by psalms, canticles, and readings. The service concludes with intercessions, the collect, and the Lord's Prayer. The structure is:

One or more of the following:

The Word of God:

In a fully choral service of evensong, all of the service except the penitential introduction, lessons, and some the final prayers are sung or chanted by the officiating cleric (or a lay cantor) and the choir. In cathedrals, or on particularly important days in the church calendar, the canticles (Magnificat and Nunc dimittis) are performed in more elaborate settings.

There are countless settings of the canticles, but a number of composers have contributed works which are performed regularly across the Anglican Communion. These range late Renaissance composers such as Thomas Tallis, William Byrd and Orlando Gibbons, to high Victorian geniuses such as Charles Villiers Stanford, Thomas Attwood Walmisley and to later masters of the form such as Herbert Murrill, Herbert Howells and Basil Harwood. Settings from outside the core tradition of Anglican church music have also become popular, with examples by Michael Tippett, Giles Swayne and Arvo Pärt. It is also widely regarded as acceptable to perform the canticles in Latin. The earliest settings of the Magnificat alternate between polyphony and plainchant, but later devices included alternating singing between the two "sides" of the choir (the singers standing on either side of the conductor, known as Decani and Cantoris), between soloists and the full ensemble, and between singers in various parts of the building. Typically the choir is either unaccompanied or accompanied by the organ, although it is not unusual for instrumental ensembles to be engaged for very important events.

As an ordinary service, Evensong will start with the preces and responses and proceed with the canticles and psalm set to Anglican chant, with an anthem after the Third Collect.

In high church parishes Evensong may have plainchant substituted for Anglican chant and may conclude with Benediction of the Blessed Sacrament (or a modified form of "Devotions to the Blessed Sacrament") and the carrying of the reserved sacrament under a humeral veil from the high altar to an altar of repose, to the accompaniment of music.

The service may also include hymns. The first of these may be called the Office Hymn, and will usually be particularly closely tied to the liturgical theme of the day, and may be an ancient plainchant setting. This will usually be sung just before the psalm(s) or immediately before the first canticle and may be sung by the choir alone. Otherwise any hymns normally come toward the end of the service, maybe one either side of the sermon (if there is one), or following the anthem. These hymns will generally be congregational.

Most cathedrals of the Church of England, from where the service originates, and a large number of college chapels in the University of Durham, Royal Holloway, University of London, University of Oxford and the University of Cambridge offer this service regularly, often daily. In other provinces of the Anglican Communion, such as the Episcopal Church in the United States of America, the Anglican Church of Australia, and the Anglican Church of Canada, it is offered less often, although many parishes do hold special Evensong services occasionally. There are some notable exceptions, including Washington National Cathedral, which holds the service five times a week, and Saint Thomas Church Fifth Avenue in New York, which holds it four times each week, as well as Christ Church Cathedral, Indianapolis; Christ Church Cathedral, Vancouver; Grace Cathedral, San Francisco; Grace Church, Madison, New Jersey; Trinity Church, Princeton, New Jersey; St. Paul's Cathedral, Buffalo; The Cathedral of St. Peter, St. Petersburg, Fl; St. John's Cathedral, Brisbane; St. Paul's Cathedral, Melbourne; St Peter's Cathedral, Adelaide; St. James' Cathedral, Toronto; St John's Cathedral, St. John's, Newfoundland; and most of the larger churches and cathedrals of the Church of Ireland, all of which hold the service at least twice a week. The popularity of evensong has spread to other Protestant denominations, particularly churches of the Presbyterian Church (USA) and United Methodist churches which use a formal liturgical worship style. Examples in the Presbyterian Church include Fourth Presbyterian, Chicago, Illinois, and Independent Presbyterian Church, Birmingham, Alabama, both of which offer evensong services on a seasonal basis.

The BBC has, since 1926, broadcast a weekly service of Choral Evensong.[1] It is broadcast (usually live) on BBC Radio 3 on Wednesdays at 16:00 and repeated the following Sunday at the same time. Between February 2007 and September 2008, the service was broadcast on Sunday only. The service comes live from an English cathedral or collegiate institution. However, it is occasionally a recording, or is replaced by a different form of service or a service from a church elsewhere in the world and/or of another denomination. The most recent broadcast is available on the BBC's "Listen Again" service for up to a week after the original broadcast. There is also an archive available.[2]