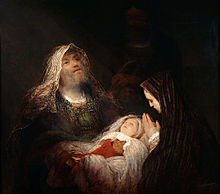 Simeon was a devout Jew who, according to the book of Luke, had been promised by the Holy Ghost that he would not die until he had seen the Saviour. When Mary and Joseph brought the baby Jesus to the Temple in Jerusalem for the ceremony of consecration of the firstborn son (not the circumcision, but rather after the time of Mary's purification: at least 40 days after the birth), Simeon was there, and he took Jesus into his arms and uttered words rendered variously as follows. 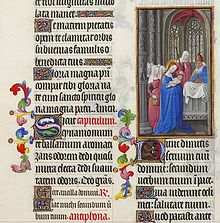 Now Thou dost dismiss Thy servant, O Lord, according to Thy word in peace;
Because my eyes have seen Thy salvation,
Which Thou hast prepared before the face of all peoples:
A light to the revelation of the Gentiles, and the glory of Thy people Israel.

Lord, now lettest thou thy servant depart in peace : according to thy word.
For mine eyes have seen : thy salvation,
Which thou hast prepared : before the face of all people;
To be a light to lighten the Gentiles : and to be the glory of thy people Israel.

At last, all-powerful Master, +
you give leave to your servant *
to go in peace, according to your promise.
For my eyes have seen your salvation *
which you have prepared for all nations,
the light to enlighten the Gentiles *
and give glory to Israel, your people.

Lord, now you let your servant go in peace;
Your word has been fulfilled.
My eyes have seen the salvation
You have prepared in the sight of every people,
A light to reveal you to the nations and the glory of your people, Israel.

Master, now you are dismissing your servant in peace, according to your word;
for my eyes have seen your salvation,
which you have prepared in the presence of all peoples,
a light for revelation to the Gentiles and for glory to your people Israel. 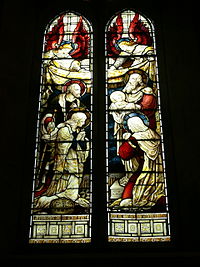 The Nunc Dimittis is the traditional 'Gospel Canticle' of Night Prayer (Compline), just as Benedictus and Magnificat are the traditional Gospel Canticles of Morning Prayer and Evening Prayer respectively. Hence the Nunc Dimittis is found in the liturgical night office of many western denominations, including Evening Prayer (or Evensong) in the Anglican Book of Common Prayer of 1662, Compline (A Late Evening Service) in the Anglican Book of Common Prayer of 1928, and the Night Prayer service in the Anglican Common Worship, as well as both the Roman Catholic and Lutheran service of Compline. In eastern tradition the canticle is found in Eastern Orthodox Vespers. One of the most well-known settings in England is a plainchant theme of Thomas Tallis.

Among Lutheran churches, the Nunc Dimittis may be sung following the reception of the Eucharist.[3]

Many composers have set the text to music, usually coupled in the Anglican church with the Magnificat, as both the Magnificat and the Nunc dimittis are sung (or said) during the Anglican service of Evening Prayer according to the Book of Common Prayer, 1662, in which the older offices of Vespers (Evening Prayer) and Compline (Night Prayer) were deliberately merged into one service, with both Gospel Canticles employed.