History of the Mediterranean region

History of the Mediterranean region 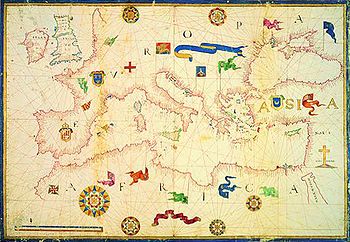 The history of the Mediterranean region is the history of the interaction of the cultures and people of the lands surrounding the Mediterranean Sea —the central superhighway of transport, trade and cultural exchange between diverse peoples. Its history is important to understanding the origin and development of the Israel and Judah, Mesopotamian, Egyptian, Canaanites, Greek, Roman, Carthaginian, Byzantine, Ottoman, Christian, and Islamic cultures. 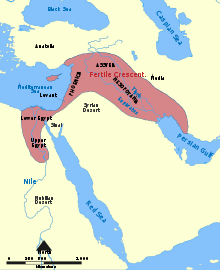 Its origins can be thought to have been with the Zanclean flood of 5.33 million years ago, described in more detail under Mediterranean basin. Two of the first commonly noted human civilizations began near the eastern Mediterranean sea. Common rhetoric suggests that Civilization first developed in Mesopotamia beginning with Sumer in the 4th millennium BC. Soon after, the Nile River valley of ancient Egypt was unified under the Pharaohs in the 4th millennium BC, and civilization quickly spread through the Fertile Crescent to the east coast of the sea and throughout the Levant, which happens to make the Mediterranean countries of Egypt, Syria, Lebanon, Palestine and Israel part of the cradle of civilization. These areas shared similar climates and geographies, but it was more difficult to spread technologies and crops, such as flax, lentil, peas, barley, and cotton to other portions of the Mediterranean basin.

In time, large empires developed in Asia Minor, such as the Hittites. The main expansion was delayed until ships sturdy enough to cross the sea were developed. Cyprus and the other islands developed, and the Minoan civilization flourished on the island of Crete. While the river valley civilizations always had larger populations, the trading societies on the coast of the sea soon became the most prosperous, and rose to power.

Two of the most notable Mediterranean civilizations in classical antiquity were the Greek city states and the Phoenicians. The Greeks expanded throughout the Black Sea and south through the Red Sea. The Phoenicians spread through the western Mediterranean reaching North Africa and the Iberian Peninsula. They often provided the naval forces of the Achaemenid Persian Empire and their heartland in the Levant was still dominated by powers rooted east in Mesopotamia or Persia. 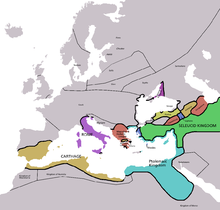 The Mediterranean region in 220 BC.

In the northern-most part of ancient Greece, in the ancient kingdom of Macedonia, technological and organizational skills were forged with a long history of cavalry warfare. The hetairoi (Companion cavalry) was considered the strongest of their time.[1] Under Alexander the Great, this force turned east, and in a series of three decisive battles, routed the Persian forces and took their empire, which included Egypt and the Phoenician lands. The major centres of the Mediterranean at the time became part of Alexander's empire as a result. His empire quickly disintegrated, and the Middle East, Egypt, and Greece were soon again independent. Alexander's conquests spread Greek knowledge and ideas throughout the region.

These eastern powers soon began to be overshadowed by those further west. In North Africa the former Phoenician colony of Carthage rose to dominate its surroundings with an empire that contained many of the former Phoenician holdings. However, it was a city on the Italian Peninsula, Rome, that would eventually dominate the entire Mediterranean basin. Spreading first through Italy, Rome defeated Carthage in the Punic Wars, despite Hannibal's famous efforts against Rome in the Second Punic War. After the Third Punic War, Rome then became the leading force in the Mediterranean region. The Romans soon spread east taking Greece, and the Greek heritage played an important role in the Roman Empire. By this point the coastal trading cultures were thoroughly dominant over the inland river valleys that had once been the heart of the great powers. Egyptian power moved from the Nile cities to the coastal ones, especially Alexandria. Mesopotamia became a fringe border region between the Roman Empire and the Persians.

When Augustus founded the Roman Empire, the Mediterranean sea began to be called Mare Nostrum (Latin: "Our Sea") by the Romans. Their empire was centered on this sea and all the area was full of commerce and naval development. For the first time in history an entire sea (the Mediterranean) was free of piracy. For several centuries the Mediterranean was a "Roman Lake", surrounded on all sides by the empire.

The empire began to crumble, however, in the fifth century and Rome collapsed after 476 AD. Temporarily the east was again dominant as the Byzantine Empire formed from the eastern half of the Roman one. The western part of the empire, Gaul, Iberia, and the Maghreb were invaded by nomadic horse peoples from the Eurasian steppe. These conquerors soon became settled, and adopted many of the local customs, forming many small and warring kingdoms.

Another power was rising in the east, that of Islam, whilst the Byzantine Roman and Sassanid Persian empires were both weakened by centuries of stalemate warfare during the Roman-Persian Wars. In a series of rapid Muslim conquests, the Arab armies, motivated by Islam and led by the Caliphs and skilled military commanders such as Khalid ibn al-Walid, swept through most of the Middle East; reducing Byzantine lands by more than half and completely engulfing the Persian lands. In Anatolia, their expansion was blocked by the still capable Byzantines with the help of the Bulgarians. The Byzantine provinces of Roman Syria, North Africa, and Sicily, however, could not mount such a resistance, and the Muslim conquerors swept through those regions. At the far west, they crossed the sea taking Visigothic Hispania before being halted in southern France by the Franks. At its greatest extent, the Arab Empire controlled 3/4 of the Mediterranean region, the only other empire besides the Roman Empire to control most of the Mediterranean Sea.[2]

Much of North Africa became a peripheral area to the main Muslim centres in the Middle East, but Iberia (Al Andalus) and Morocco soon broke from this distant control and founded one of the world's most advanced societies at the time, along with Baghdad near the eastern Mediterranean.

Between 831 and 1071, the Emirate of Sicily was one of the major centres of Islamic culture in the Mediterranean. After its conquest by the Normans the island developed its own distinct culture with the fusion of Arab, Western and Byzantine influences. Palermo remained a leading artistic and commercial centre of the Mediterranean well into the Middle Ages.

Europe was reviving, however, as more organized and centralized states began to form in the later Middle Ages after the Renaissance of the 12th century. Motivated by religion and dreams of conquest, the kings of Europe launched a number of Crusades to try to roll back Muslim power and retake the holy land. The Crusades were unsuccessful in this goal, but they were far more effective in weakening the already tottering Byzantine Empire that began to lose increasing amounts of territory to the Seljuk Turks and later to the Ottoman Turks. They also rearranged the balance of power in the Muslim world as Egypt once again emerged as a major power in the eastern Mediterranean.

Europe continued to increase in power as the Renaissance began in Italy. The Italian "Repubbliche Marinare" (Maritime Republics) of Venice, Genoa, Amalfi and Pisa developed their own "empires" in the Mediterranean shores. The Islamic states had never been major naval powers, and trade from the east to Europe was soon in the hands of Italian traders, especially the Venetians, who profited immensely from it. Republic of Ragusa used diplomacy to further trade and maintained a libertarian approach in civil matters to further sentiment in its inhabitants. The Western Mediterranean sea was dominated by the Crown of Aragon: thanks to their possessions of Sicily, the Kingdom of Naples, Sardinia, the Balearic Islands, the Duchy of Athens the Duchy of Neopatria, and several northern African cities, by the 1420s they kept tight control over the trade routes of that linked the Western and Eastern Mediterranean. Their army was the biggest in the Mediterranean sea, and during the 15th century its power remained unchallenged.

Ottoman power continued to grow, and in 1453, the Byzantine Empire was extinguished with the fall of Constantinople. The Ottomans already controlled Greece, Bulgaria and much of the Balkans (except Albania, due to its resistance), and soon also began to spread through North Africa. North Africa had grown wealthy from the trade across the Sahara Desert, but the Portuguese, who, along with other Christian powers, had been engaged in a long campaign to evict the Muslims from Iberia, had found a method to circumvent this trade by trading directly with West Africa. This was enabled by a new type of ships, the caravel, that made trade in the rough Atlantic waters profitable for the first time. The reduction in the Saharan trade weakened North Africa, and made them an easy target for the Ottomans. 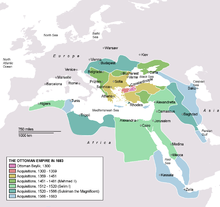 Ottoman Empire territories acquired between 1300 and 1683.

Greatest extent of Italian control of the Mediterranean littoral and seas (within green line & dots) in summer/fall 1942. Allied controlled areas in red.

The growing naval prowess of the European powers confronted further rapid Ottoman expansion in the region when the Battle of Lepanto checked the power of the Ottoman navy. However, as Braudel argued forcefully, this only slowed the Ottoman expansion instead of ending it. The prized island of Cyprus became Ottoman in 1571. The last resistance in Tunisia ended in 1574 and almost a generation long siege in Crete pushed Venetians out of this strategic island in 1669. A balance of power was then established between Spain and Ottoman Empire until 18th century, each dominating their respective half of Mediterranean, reducing Italian navies as naval powers increasingly more irrelevant. Furthermore, the Ottoman Empire had succeeded in their objective of extending Muslim rule across the North African coast.

The development of oceanic shipping began to affect the entire Mediterranean, however. While once all trade from the east had passed through the region, the circumnavigation of Africa allowed gold, spices, and dyes to be imported directly to the Atlantic ports of western Europe. The Americas were also a source of extreme wealth to the western powers, from which some of the Mediterranean states were largely cut off. The base of European power thus shifted northward and the once wealthy Italy became a peripheral area dominated by foreigners. The Ottoman Empire also began a slow decline that saw its North African possessions gain de facto independence and its European holdings gradually reduced by the increasing power of Austria and Russia.

By the nineteenth century the European States were vastly more powerful, and began to colonize North Africa. France spread its power south by taking Algeria in 1830 and later Tunisia. Britain gained control of Egypt in 1882. Italy conquered Libya from the Ottomans in 1911. The Ottoman Empire finally collapsed in the First World War, and its holdings were carved up among France and Britain, but the Turkish regions quickly regained their independence, becoming the independent state of Turkey in 1923. During the first half of the twentieth century the Mediterranean was at the center of the expansion of the Kingdom of Italy, and was one of the main areas of battle during World War II between the Axis and the Allies. Post-world war period was marked by increasing activity in the Eastern Mediterranean, where naval actions formed part of ongoing Arab-Israeli conflict and Turkey had occupied the northern part of Cyprus. American naval power made the Mediterranean its permanent base during the Cold war. Today, the Mediterranean Sea is the southern border of the European Union.