From the outset, the WYPTE branded its operations as Metro, originally with a suffix of its district; that is, Metro Leeds for Leeds, Metro Bradford for Bradford, Metro Wakefield for Wakefield, Metro Kirklees for Huddersfield, and Metro Calderdale for Halifax, but regional variations in branding have since been discontinued. It is responsible for setting transport policy in the area, and by subsidising bus services and by funding local train services, which are branded as MetroTrain.

The West Yorkshire Passenger Transport Executive was formed on 1 April 1974 as a separate statutory body responsible for integrating public transport within the guidelines laid down by the newly formed Metropolitan county of West Yorkshire, created following the Local Government Act of 1972.[2] The Executive had to operate within the policy guidelines of the County Council Public Transport Committee, coordinating the operation of all public transport in the county. The Executive also inherited approximately 1500 buses operated by the former municipal authorities of Bradford, Leeds, Halifax and Huddersfield along with 6000 staff and the associated garages and street furniture.

The executive relinquished ownership of local buses following the Transport Act 1985, creating arms-length operating companies. It continued to coordinate public transport as the West Yorkshire Passenger Transport Authority when the metropolitan county was abolished in 1986.[3]

Buses in West Yorkshire are operated by private companies, with early morning, late evening, Sunday and rural services often supported by Metro. They have a special rural bus section, which promotes a combination of minor local links and major long distance routes in the county.

New buses were purchased in large numbers at the outset, with Leyland Atlanteans and Fleetlines being bodied by Charles H. Roe of Leeds to a specific design for the PTE, with most of the Fleetlines going to Halifax, though a small number of Fleetlines were bodied by Northern Counties. A number of MCW-Scania Metropolitans were also purchased. Single decks were met by short Leyland Leopards with Plaxton Derwent bodies usually for Halifax. The PTE also had a coach fleet which traded as MetroCoach, with the more upmarket coaches having being branded MetroCoach Executive: these were usually Leyland Leopards with Plaxton and Duple bodies, but later Leyland Tigers with the same bodies were also purchased including some Royal Tigers with stylish Roe Doyen bodywork bought in 1983. The coach livery was ivory, red and brown.

In 1979 the last Fleetlines arrived for the PTE (making a total of 156 PTE specified Fleetlines), and towards the end of the year the a new batch of Atlanteans arrived with a revised driving position, which was made higher up, pantograph windscreen wipers, and a new interior decor which was akin to London Transport's with yellow/orange upper and green/brown lower panels and a new moquette (seat pattern), again, similar to LT's in a brown and orange pattern. This was the new standard interior specification.

In 1980 a batch of the new Leyland National 2 was purchased, and ten MCW Metrobuses arrived, five arriving in April and five in November.

In 1976 modifications were made to the livery. Originally there were three stripes at the sides of the destination box that wrapped round to the sides of the bus and swept down. This took time to apply, and a trial was made with one thin line. In 1977 a further modification was made when the lines were removed entirely and the green area at the skirting area of was raised up: thus there was slightly more green. The other change was the fleet name, which was known as MetroBus, removing the district names.

During July 1981 MetroBus (the WYPTE) and the National Bus Company (NBC) formed a new integrated transport system for West Yorkshire, known as the "Metro-National Transport Company Ltd". All PTE and NBC buses in the West Yorkshire area began to appear with a new emblem, which consisted of the MetroBus WY's in one box and the NBC "double N" or "N-blem" appearing in another to the right of the PTE emblem, and slightly lower, both boxes were linked to show the integration. They also appeared with MetroBus fleetnames with "The easy way from here to there in West Yorkshire"

December 1981 saw the last Atlanteans delivered to the PTE with VWW361X: numbered 6361 it carried the PTE standard Roe bodywork. In 1980/1 the PTE initially ordered 22 of the new Leyland Olympians (although two were cancelled); also ordered was a further 10 MCW Metrobuses but with the 'new' Alexander RH-type bodywork. They also received two of three long National 2's VWU1331/2X (1331/2) with YWX333X (1333) arriving in early 1982. In October 1981 the first Olympian 5001 (reg UWW1X) arrived: this bus is now with Chester City Transport as HTU785X (this vehicle has however been out of service since June 2005), the second 5002 (UWW2X) arrived about the same time. The rest of the batch arrived during March 1982 and around the same time were the ten Alexander Metrobuses. More Olympians arrived from later in 1982-3.

January 1983 saw the arrival of 20 MCW Metrobus MK2's and a batch of Duple Dominant bus bodied Leyland Tiger buses, which were dual-purpose. Also in 1983 two buses in Huddersfield were painted to mark 100 years of public transport in Huddersfield with Atlanteans 6299/300 (PUA299/300W), the former being painted in Huddersfield red and cream and the latter in Huddersfield Tramways livery. Later in the year more Olympians arrived, and during 1984 a total of 40 Metrobuses were purchased plus more Tigers. Charles H. Roe closed down at this time (although was to reopen in 1985 as Optare) and the last batch of Roe-bodied Olympians made a total of 151 Roe-bodied Olympians, with the last complete bus being 5145 (B140RWY); six of the batch were coach-seated for MetroCoach - these vehicles however had only their shells built at Roe - the interiors were finished off at ECW.

In 1985 the PTE ordered 15 Leyland Olympians with Optare bodywork:

In 1986 the company bought some minibuses: a batch of Optare-bodied Freight Rover Sherpas. These were 1701-1715. Also in 1986 fifteen Leyland Cubs were built - 1801 to 1815. Whilst all of these featured the same moquette as the coach-seated Olympians (5501-5516) built by Roe/ECW and Optare, only the first four Cubs had full coach seats, the remainder having lower seats with handrails on top.

As of November 2008, the only bus with direct West Yorkshire PTE parentage still in service with a successor of WYPTE is Leyland Olympian 5150, C150KBT, which is expected to be withdrawn imminently, bringing a final closure to this chapter.

De-regulation occurred on Sunday 26 October 1986. The WYPTE bus division was re-named Yorkshire Rider and with it a new livery of dark olive green and cream was used and a stylised "YR" emblem, five double-decker buses were operated in each of the municipal council's colours (already included were the two Huddersfield buses), with words on the sides between the decks saying "Building on a Great Tradition". The bus services and fare/bus pass/timtables division was re-named Metro. Throughout 1986/7 a lot of Freight-Rover Sherpa minibuses were purchased which was the craze during the early days of de-regulation, though bigger MCW Metroriders were purchased in 1987/8. Yorkshire Rider privatised in October 1988, the first PTE to be privatised, during this time 50 new double-dckers arrived, 25 MCW Metrobuses and 25 low-height Northern Counties Leyland Olympians, which featured yet again another interior decor change, with two tone grey panels, and a new moquette being two tone grey and pink with YR emblems on. These were the last order before privatisation. From then on the PTE (by now known as Metro) did not run buses anymore.

As of 2011 the following companies are the primary service bus operators within West Yorkshire and are subject to Metro conditions and ticketing [4]:

In August Metro start to Issue A ticket called Metro Active. This ticket is Available after 09:30am and is used by children (under 11) with parents, children aged 11-16 with a young persons photocard and teenagers aged 17-19 with a Scholars Photocard. The cost of the ticket is just £1 and can be used on all operators services within West Yorkshire (Also includes Barnsley and Doncaster).

My bus is a school bus service provided by West Yorkshire Metro with certain features which set it apart from normal school transport services in the United Kingdom[5][6]:

The service, using buses painted yellow with coordinated My bus branding gained significant mode shift: 64% of primary school users were previously driven by car. Under this scheme, these buses were not allowed to be used for non-school purposes.[6] 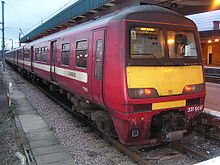 A Class 321 electrical multiple unit at Doncaster carrying the original Metro livery. This livery has now been replaced by the newer Northern Rail/Metro livery.

There are 12 lines running through the West Yorkshire area, each with their own name. The names are Airedale, Caldervale, Dearne Valley, Hallam, Harrogate, Huddersfield, Leeds-Bradford, Penistone, Pontefract, Wakefield, Wharfedale and York & Selby, which has been named after the areas that they serve.

The majority of these lines run into Leeds, while most lines also run into neighbouring areas, serving towns and cities such as Barnsley, Blackpool, Doncaster, Harrogate, Liverpool, Manchester, Nottingham, Preston, Sheffield and York plus Manchester Airport. Some lines over-lap each other, which means that some stations such as Caslteford, Huddersfield and Wakefield Westgate is served by more than one line.

Most lines have frequent services along its routes, however the Dearne Valley line has a limited service, running two trains a day in each direction.[8]

This is a list of routes in West Yorkshire [9]:
NB: Places in bold are where services terminate, places in italic are stations located outside of West Yorkshire

WYPTE has had a programme of reopening railway stations throughout its existence and has reopened at least 20 stations in West Yorkshire since it came into being in 1974. The stations it has reopened are:

1988 - Burley Park, Outwood and Cottingley. Cononley also reopened in 1988. This station lies just outside of West Yorkshire is part of the WYPTE area which now expands to Skipton later in 2009.

1990 - Walsden and Steeton and Silsden

1992 - Streethouse, Featherstone, Pontefract Tanshelf. These three stations reopened on the same day, 12 May, when the line between Pontefract Monkhill and Wakefield Kirkgate was reopened.

2000 - Brighouse This station was opened when the Halifax to Huddersfield link was re-opened to passengers. Plans for a station in Elland were cancelled.

There are plans to reopen further stations including at Apperley Bridge and Kirkstall Forge on the Airedale Line, hopefully in 2012 and Low Moor near Bradford on the Caldervale Line. New stations are also planned at Horsforth Woodside and East Leeds Parkway which would be located at Micklefield.

In 2001 Metro (the West Yorkshire PTE), came up with Leeds Supertram, with the idea of operating (and, to some extent bringing back) a tram network for Leeds. After the original scheme exceeded its budget, the Government asked Metro to look at ways of reducing cost of Supertram. In the spring of 2005 Metro went back to the Government with a re-costed plan but the Secretary of State for Transport (then Alistair Darling) rejected the proposal after the 2005 General Election. Mr. Darling responded by pointing to plans by a private bus operator for a bus system where the vehicles were designed to look like trams.

The Leeds SuperTram project is considered one of the major victims of the "Darling Axe".

This is not the first time such a scheme has been unsuccessfully pursued. In the mid-1980s the PTE was interested in bringing back trolleybuses in Bradford, but this came to naught.