First South Yorkshire is the largest bus operator in South Yorkshire, England. As a division of FirstGroup the company's legal name was, for a time, Mainline which operated it between 1993 and 1998, following the sale South Yorkshire Transport (SYT) to its employees.

SYT was eventually sold to its employees in 1993, and it became Mainline Group Limited.[citation needed] It was bought by First Group in 1998, operating at first as First Mainline and then First South Yorkshire.[citation needed]

SYT's head office was moved from SYPTE's HQ in Exchange Street, Sheffield to Amos Road in Meadowhall and at the time of the company's formation its central works was located on Queens Road in Sheffield, although this later closed. Under First ownership, Herries Road, Leadmill Road, Greenland Road and recently, Halfway garages have all been closed with only the Olive Grove garage remaining in Sheffield.[citation needed] The head office is now based at Midland Road garage in Rotherham.

Under SYT, Mainline began as a trade name for the main routes, starting in Sheffield in 1989. Buses traded with Sheffield Mainline names in a bright red and yellow livery, replacing the beige/red livery used before. It was followed by Doncaster Mainline in a silver grey and red livery relieved by a light yellow band and finally Rotherham Mainline, whose buses ran in blue and yellow. In 1992 the locality was dropped from the logo when Mainline became the fleetname, the livery based on the former Sheffield Mainline red and yellow, but with silver and blue bands added. Mainline operated most bus services in South Yorkshire over that time (thanks in the main to the former monopoly position of SYT), though other operators such as Leon Motors, Wilfreda Beehive, Andrew's of Sheffield and Yorkshire Terrier started making inroads. The company was generally popular with passengers, and boasted an extensive network with low fares and modern vehicles.[citation needed] Mainline was sold to its employees in 1993, though Stagecoach bought a 20% stake in the company not long after. This had to be sold off in 1995, at which point the newly created FirstBus took this stake.

Mainline was taken over by First Group in 1998, and became First Mainline. A simplified livery of just red and yellow was introduced, reminiscent of the original 1989 Sheffield Mainline livery. The name was altered again to First South Yorkshire. Since about 2000, vehicles began being repainted in First Group corporate livery (nicknamed "Barbie" by enthusiasts). There are three versions of the livery: the main corporate livery, a livery intended for buses pre 1998 but this livery is being slowly phased out, and a revised version of the original livery. 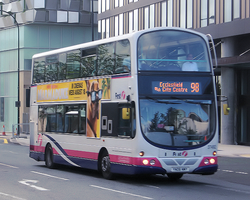 First received a large batch of Volvo B10BLEs in 1999 as well as a number of Volvo B7Ls (most from First Manchester) and B7TLs between 2002–2004; most of these were however allocated to Sheffield, where 10 Volvo B7TLs/Wright Eclipse Gemini also entered service during summer 2006. Secondhand Volvo Olympians (Northern Counties) were cascaded from London and now make up the entire step entrance double decker fleet.

Save for the 10 Geminis, the fleet changed very little from 2003 until 2007 when First invested £6.4 million in 38 new double-decker buses.[1] Twenty Volvo B9TL/Wright Eclipse Gemini double-decker buses arrived to upgrade the X78 route to low-floor operation; these new buses entered service on 1 June 2007. All twenty buses are now based at Rotherham Midland Road Garage although previously they were to be shared with Doncaster Leger Way depot. Doncaster received the remaining 18 of these buses in early 2008. These operate services 50, 55 and 78 as part of the Woodlands to Rossington Quality Bus Corridor. Shortly afterwards, an order for 58 more of the same buses was announced, and the majority of these have now entered service in Sheffield on routes 47/48/75/76. 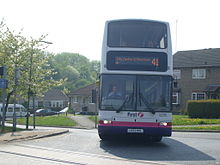 Dennis Dominators were the main double deckers in the fleet with over 300 at one time. These have steadily been withdrawn and the last ran in service on 26 July 2006. A large number of Volvo B10Ms with Alexander PS bodywork (new to Mainline) are still in service although some of the older ones have been converted to driver training buses, some of the others are still in service while the rest are operating in Scotland with First Glasgow, and a large batch of the newest ones were recently cascaded to Glasgow. The latest wave of new buses has allowed many of the older B10Ms to finally leave the fleet, and has also seen off the last of the step entrance Plaxton Pointers (both Dennis Dart and Volvo B6 chassis example were operated, indeed two of the latter remain in service albeit with Alexander Dash bodywork).

As of September 2010 the following bus types are operated:[citation needed]

Service X78 is a limited stop service which goes from Sheffield Interchange via Meadowhall, Rotherham and arriving an hour and a half later in Doncaster Frenchgate Interchange. From Monday to Saturday it operates every ten minutes during the day and every fifteen minutes on Sundays and week day evenings.

First also ran 215, 218, 240 to the Peak District, but as of 27 April 2009 First withdrew these services, and TM Travel operate these routes on behalf of Derbyshire County Council.

First have branded some services as Overground on bus services with high frequency during the daytime. Based on the London Underground network where each frequent service is given a recognisable colour, each Overground service is, in addition to its running number, colour coded. The concept is now a prominent fixture throughout all First bus companies in the UK. Most buses on the Overground run to a frequency of ten minutes, although some run every fifteen to twenty minutes, a few routes in certain areas may even run on a frequency under ten minutes.

FirstDay is for unlimited travel on all services in South Yorkshire, and costs £4.80. Local FirstDay tickets, covering Sheffield, Rotherham or Doncaster only, are available for £4.30. A FirstDay Group ticket is available to groups of two adults and a maximum of three children for £8.50.

FirstDay GreenZone is for unlimited travell on all services within a smaller area of the FirstDay in Doncaster for £3.[2]

FirstWeek is for unlimited travel for a week on all South Yorkshire services for £19.50. A local FirstWeek ticket for Sheffield only is £17.50, while a Doncaster or Rotherham ticket is £16.

FirstXtra is for people who buy a local FirstDay/Week/Month/Term ticket and want to travel to another town for £1.

The Centro is a ticket for Sheffield City Centre for 50p and Doncaster Town Centre for 40p.

Students can travel for 70p on the Unilink service if valid student ID is shown.[3]

Other tickets: Children under 5 are free, Children aged 16 and under and students aged 16–18 can travel for 50p if they show a valid pass.[4] Dogs cost 40p. These apply to all bus operators in South Yorkshire.

First also do special offers on certain Overground routes. Such as the Red Line and Orange Line. A FirstDay Red or a FirstDay Orange specific for that route is for £3, a FirstWeek for £9.

First lost many routes to other competition recently, particularly in Sheffield. Some routes are either shared with another company or completely run by a competitor. Routes 4/6/7/17/20/20A/33/272 are all now shared with other operators; this caused Stagecoach Sheffield and TM Travel ridership to increase and First's large share of the market to decrease dramatically.

First attracted criticism for raising fares four times in 2005,[5] raising the cost of a 5-10 minute journey to £1.60 as of February 2007, as well as for cutting a number of services. But the fares for the 51 service (Charnock-Lodge Moor via City Centre and back) were frozen. Referring to low passenger numbers in an interview, First South Yorkshire's managing director, Gary Nolan. said that on some routes. his drivers were "carting fresh air about" and, as such, it was uneconomical to maintain current service levels.

The company also attracted criticism from national journalists[who?] who launched an investigation into why First introduced several price rises in just two years whilst regional competitors such as Arriva and Stagecoach managed to cap their fare rises. The group's then financial director Nicola Shaw attributed the increases in fares to rising oil prices, despite the fact that in on press releases the group has said that it had hedged all of its fuel purchases to offset the rising cost of oil.

The company was also criticised[by whom?] for the seating comfort of newer vehicles and for withdrawing the 'bendibus' from the roads of Sheffield. The company later went on to explain that the vehicles had been withdrawn 'due to their mileage', but these were later found to be in service at both Bristol airport and in Bath.

The company has suffered from poor industrial relations with drivers striking on many occasions due to pay and working conditions.[citation needed] In such strikes, management employees tried to run a skeleton service by driving the buses themselves.