First Midland Red is a bus company operating in Herefordshire and Worcestershire in the English Midlands. The company was formed in 1981, and until 1999 was known as Midland Red West.[1] It is owned by First Group.

Midland Red (West) Limited, using the trading name Midland Red West, was one of five bus operating companies created when the National Bus Company's (NBC) massive Midland Red Omnibus Company Limited (MROC) subsidiary was split in 1981 in preparation for privatisation. It was created in September 1981 with a fleet of 183 vehicles. The local brand names Reddibus, Severnlink, Wandaward, Wayfarer and Wendaway, created by Midland Red as a result of the Market Analysis Project (MAP), continued.[2]

In November 1985 Midland Red (West) Limited introduced a fleet of 60 new minibuses to operate its urban network in Worcester as part of a new high-frequency service within the City, operating under the Citibus trading name. The distinctive yellow, orange and blue liveried Mercedes L608Ds displaced larger buses such as Leyland Nationals onto interurban routes. At its launch the service was the UK's largest urban bus service operated by minibuses.

In March 1986 a similar, but much smaller, minibus service was launched for the Kidderminster and Stourport area under the Wyre Forest Shuttle brand. Also operated by Mercedes L608Ds, the buses sported an almost identical livery to the Citibus fleet, with the blue colouring changed to green. A month later minibus operations were also rolled out in Redditch under the Reddilink brand, though larger buses still continued to operate throughout the town on some routes. The L608Ds used here carried a red and yellow livery similar to that of Citibus.[2]

The livery of many of its vehicles changed from the NBC's poppy red to a deeper red and cream livery. The company also sported a new logo of a Wyvern to replace the NBC's 'double N' motif. Apart from being the name of an imaginary creature, the name Wyvern was also a portmanteau of the 2 major rivers which run through Herefordshire and Worcestershire; the Wye and Severn.

In 1987 Midland Red West Holdings Limited purchased the Bristol Omnibus Company (BOC) from the NBC. BOC at the time was operating urban services around the Bristol area under the City Line trading name, which was kept.

In 1988 minibus operations were finally launched in Hereford under the Hereford Hopper brand. Also operated by newer Mercedes L609Ds, the buses sported an almost identical livery to the Citibus fleet, with the blue colouring changed to green.[2]

In 1988 Midland Red West Holdings Limited was acquired by Badgerline Holdings Limited (a management buyout company which had purchased Badgerline Limited from the NBC operating rural services around the Bristol area).[3] The trading names of Midland Red West and Badgerline remained unchanged as did vehicle livery, though many of Midland Red West's Leyland Lynxes sported a badger motif on the rear sides of the vehicle. The merger reunited the two consituent parts of Bristol Omnibus Company, City Line and the Bristol country services which had been separated from BOC in 1986.[4]

In 1990 Midland Red West Limited began to expand and modernise its fleet of full-size single deck buses by purchasing 50 Leyland Lynxes, which were put in to service at the firm's Digbeth depot, displacing all that depot's Leyland Nationals. Eight of these Lynxes shortly found their way to Redditch depot and two years later five of these eight Redditch Lynxes ended up at Kidderminster depot, while Redditch acquired four more from Digbeth.[2]

In 1995 the Badgerline Group merged with Grampian Regional Transport Limited (GRT) to create FirstBus which, because of other transport interests, renamed itself FirstGroup in 1998. Now part of FirstGroup, Midland Red West Limited changed its company name to First Midland Red Buses Limited in 1999. The trading name and livery of vehicles gradually changed over the years as part of a four-step phased change rather than an instant 'overnight' change. These changes, which were also implemented with many of First's other bus operating companies, were:[2] 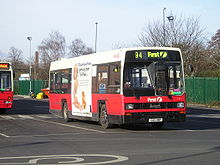 The introduction of the First trading name brought to an end nearly a century of the Midland Red name appearing on buses, although this name appeared on a repainted Alexander Dennis Enviro300 and Leyland National to celebrate the centenary of the creation of Midland Red.[2]

In 2001 First Midland Red Buses won the contract to operate the bus services for Worcester's first permanent Park and Ride site on behalf of Worcestershire County Council. A fleet of new Caetano Nimbus-bodied Dennis Darts were leased for the service, which were branded Worcester North, and operated the service from the Park and Ride site, located in the Perdiswell area of the city, to the city centre and vice versa.