First Chester & Wirral is a division of bus operator First Manchester Ltd., running local bus services in and around Chester and the Wirral, north west England. The company is a subsidiary of FirstGroup plc, the largest bus operator in Britain.

The current operation consists of two depots, one in Chester and one in Rock Ferry, Wirral. Both depots originally belonged to the former Crosville Motor Services, and were purchased (along with the since-closed Ellesmere Port depot) by Potteries Motor Traction in February 1990.

The takeover saw the company known as PMT and then First PMT before being split into two groups, both of which still had the headquarters in Stoke-on-Trent under First Potteries. The original Potteries Motor Traction was named First Staffordshire & South Cheshire and the north Cheshire and Wirral operations being called First Chester & The Wirral.

The company also operates eleven Blue Bird AARE 60-seat school buses in the Wrexham area. Wrexham depot is classed as an outstation of Chester depot, although a separate operator's licence is held for these operations, as Wrexham is located in the Welsh Traffic Area.

The ChesterBus logo prior to being bought by FirstGroup.

On 21 June 2007, it was announced that the then Chester City Council had agreed to sell ChesterBus to FirstGroup, subject to Government approval [1]. ChesterBus, which operated services in and around the City of Chester, was the new name for Chester City Transport following a rebranding and updating of its core network in April 2005. Prior to its sale to FirstGroup, it was wholly owned by Chester City Council and was one of the few remaining municipal bus companies in the UK.

Unusually, the ChesterBus depot dated back to 1878, was located by the railway station in Chester, and had been used in the horse and tram days; there were still some cobbles and original narrow gauge tram-lines on these premises at the time of its closure. The company had hoped to move to a new site by the end of 2006, but the old depot was still in use at the beginning of 2009. By 2011 the operations had been consolidated at the former Crosville depot on Liverpool Road, and the former CCT depot site made available for redevelopment. 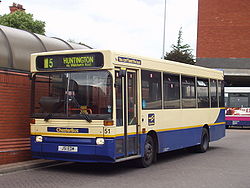 ChesterBus's livery was cream with a 30 cm blue strip running along the base of the bus sides, sweeping up towards the rear of the bus, and two horizontal yellow bands. It was derived from the 'Blue Diamond' identity used on low-floor buses when they were first introduced; this livery was similar but without the sweeping rear treatment and with only one yellow band. The previous livery of maroon and cream was used on step-entrance vehicles until replaced by the ChesterBus livery. Buses dedicated to Park & Ride services, including eight BMC Falcons, carried a special 'flake grey' Park & Ride livery.

The ChesterBus livery has now been completely superseded by FirstGroup's corporate livery.

At the time of sale to FirstGroup, the most numerous vehicles in the fleet were 17 Dennis Darts with Plaxton Pointer bodywork, dating from 1991-6. These have since been replaced, mainly by Scania/Wright low floor single deckers transferred in from other First subsidiaries. Seven Dart SLFs with Marshall Capital bodywork, bought new in 1999/2000, were among the few vehicles retained, and have been repainted into First livery. Eight BMC Falcons bought new in 2003/4 retained their special 'flake grey' livery for Park & Ride services, but were returned to the Council, and replaced by Volvo/Wright Eclipses.

Following the withdrawal of Dennis Dominators, the double-deck fleet at the time of takeover consisted of Leyland Olympians, the majority of which had Northern Counties bodywork. These have been replaced by Scania N113 double-deckers, cascaded from nearby Rock Ferry depot.

Seven open top double deck tour buses, which were operated under the City Sightseeing brand, were also disposed of. Replacements, in the form of Leyland Olympians, arrived at the beginning of the 2008 tourist season.

There was speculation in the summer of 2006 that ChesterBus would be sold to a private operator, and the sale was confirmed in August with Chester City Council announcing that 12 companies were interested in buying.[2]

In September 2006, Arriva North West and Wales registered a network of services, to commence in January 2007, which duplicated a number of ChesterBus's routes. On 11 October 2006, ChesterBus and Chester City Council commenced an action in the High Court against Arriva, claiming that the registrations were anti-competitive under the Competition Act 1998, and asking for an injunction requiring Arriva to de-register them. In November, most of the registrations were cancelled, though revised registrations for the 1/1A and 15A were made.

The agreement of the sale was announced on 21 June 2007. The sale left only 14 municipal bus operators remaining in Britain. On 2 July, Arriva started operating services that duplicate ChesterBus's 1/1A and 15 routes, and from 3 September 2007, Arriva started operating a route identical to that of ChesterBus's number 9 route. Although the Arriva buses have more expensive fares than ChesterBus (£1.00 for a single, £2.00 for a day ticket, compared with 70p for a single and £1.30 for a return on ChesterBus services), they run more frequently, every 10 minutes compared with ChesterBus's every 15 minutes.

The table describes the current fleet as at May 2011.