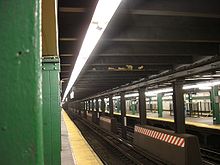 Chaining numbers can be seen on the pillars in the middle of West Fourth Street – Washington Square.

New York City Subway chaining is a method to precisely specify locations along the New York City Subway lines. It measures distances from a fixed point, called chaining zero, following the twists and turns of the railroad line, so that the distance described is understood to be the "railroad distance," not the distance by the most direct route ("as the crow flies"). It is an example of the chainage system, instead of the milepost or mileage system.

The New York City Subway system differs from other railroad chaining systems in that it uses the engineer's chain of 100 feet (~30.5 m) rather than the surveyor's chain of 66 feet (~20 m).

Chaining zero is a fixed point from which the chaining is measured on a particular chaining line. A chaining number of, for example, 243 at a specific line location (called a chaining station) identifies that the location is 24,300 feet (~4.6 miles or ~7.4 km) from chaining zero, usually measured along the center line of the railroad.

Once chaining is established, it is rare but not unheard of to change the location of chaining zero or the route along which it is measured on a given line. There are several examples of chaining numbers that refer to a chaining zero location that no longer exists or along a physical line that no longer exists, because of abandonment or demolition. Notable among these are several existing chaining lines that originated near New York City Hall via the Brooklyn Bridge, discontinued since 1944. It is very rare but not impossible for a reroute to alter the accuracy of chaining numbers, if only slightly.

Exceptions exist to the principle that chaining numbers represent a railroad distance to the zero point. On the original IND chaining zero for the original system is a political rather than physical location, and there is no railroad at or near the zero point. Sometimes trackage (usually but not always short distances) is chained backwards from a tie point with another line.

Chaining lines are routes on physical railroad lines that are usually described by one or two letters for the purpose of identifying locations on those lines.

For example, the BMT A chaining line begins at BMT South chaining zero north of 57th Street – Seventh Avenue on the BMT Broadway Line, but is interrupted north of the Canal Street stations, where the express tracks becomes BMT H for the trip over the Manhattan Bridge south side tracks and the local tracks become BMT B for Lower Manhattan and the Montague Street Tunnel. The BMT A line begins again in the middle of the Manhattan Bridge span on the north side tracks, passes through DeKalb Avenue and then becomes the BMT Brighton Line for that line's entire distance to Stillwell Avenue. BMT A originally traversed the entire north side of the bridge, connecting Canal to DeKalb, while H ran towards Chambers St. instead of Canal, but this was reconfigured as part of the Chrystie Street Connection. The IND B designation was extended past the portal of the new connection, to meet the BMT A in the middle, yet retained the BMT chaining numbers on the bridge itself. The tracks leading to Chambers St. were severed from the bridge and were re-designated as part of BMT J.

Each specific location along a line is known as a chaining station, and is identified by a number unique to that chaining line. The precision of the location depends on its usage. On engineering maps, the location of such features as curves, switches, crossings, stations and platforms are ordinarily specified to a precision of one foot (30 cm). This is expressed as [chains plus feet]; a chaining station located 1,470 feet from chaining zero would be described as 14+70. For greater precision, or where style or protocol requires it, unit of less than a foot may be described. The Brooklyn Rapid Transit Company used [chains plus feet point hundredths] without trailing zeros: thus a map location designated as P.S. 14+70.25 would indicate that the Point of a Switch at that location is 1,470 and one quarter feet (1,470 feet and 3 inches) from chaining zero.

On the BMT and IND an odd numbered mainline track is going railroad south and an even numbered mainline track is going railroad north. In many locations a track may be going "railroad" north or south where the compass direction is different or even opposite. This may be because it is an essentially east-west line (e.g., the Jamaica Line), so railroad north means towards Manhattan and railroad south means away from Manhattan. It may also be because a line continuing from a north-south line turns in another direction (e.g., the IND Fulton Street Line) but the railroad direction remains the same.

These track numbers provide a definitive way of determining whether a particular direction on a particular line is going "railroad" north or south. Especially it shows that "south" on several lines (including the BMT Jamaica Line, the IND Fulton Street Line and the BMT Myrtle Avenue Line) that run in an easterly to northerly compass direction for their entire route are nevertheless running railroad south.

The local (usually outside) tracks on a given BMT/IND line are numbered 1 (south) and 2 (north). The express tracks are numbered 3 (south) and 4 (north). If there are an odd number of mainline tracks, the center track is (for example) track 3/4. The signals heading southbound will show the location as track 3 and northbound track 4. Additional tracks on the same chaining line are usually numbered higher by the same rules. On the four track BMT Brighton Line, the tracks from west to east are:

On the three track BMT West End Line, they are:

On the two track BMT Canarsie Line, they are:

On a three track line, 1/2 are used signals on the middle track (1 is for signals governing northward moves, and 2 southward). 4 and 3 are still the local tracks:

And on a two-track line, there are no express tracks, so the two tracks are:

Strangely, IRT track designations differ from the signal chaining track numbers they are numbered from left to right (facing north), tracks number 1 through 4:

And on a three-track line:

When one line splits from or joins another, a decision must be made on how to measure the chaining distances on the individual lines. One way is to establish a new zero point for one or more lines, but this is inefficient. Typically a major end-point terminal will be chosen as chaining zero, and all lines that are tributary to that terminal will measure their chaining from that point. This process is called tying. For example, if one line ties to another at a certain point, and the chaining station number at that point is 135+10 (13,510 feet from chaining zero), then a location on either branch that is 1,000 feet from that will have a chaining station number of 145+10.

When a new line or branch separates from another line, and the new line "picks up" the chaining numbers of the original line, the new line is said to be "tied" at that point. For example, where the BMT Montague Street Tunnel Line (BMT B) separates from the Broadway Line (BMT A via the Manhattan Bridge) north of Canal Street and Broadway, we say that BMT B ties to BMT A at Canal and Broadway. That way (assuming BMT A ends at chaining zero, which it does) the distance from a chaining station on BMT B is measured by following the physical BMT B to its tying point, and then following the physical BMT A from there to chaining zero.

Sometimes when a line leaves another line, the chaining on the branch line should be tied to the original line, but we want the chaining distances to go down instead of up. This is almost always because the branch joins the main line coming from the same direction as the main line, and we want the chaining numbers of the branch to be derived from the main line, so as not to have to establish a separate chaining zero location for the branch. An example of this was the Fulton Ferry branch of the Fulton Street Elevated (BMT K) which split from the Brooklyn Bridge branch at a location called Kings County (KC) Junction. Chaining zero for both branches was at Park Row, over the Brooklyn Bridge. The stub end branch to Fulton Ferry (the original terminal) was chained backwards from Kings County Junction to the East River shoreline. The chaining numbers went from 0+00 (zero) at the western end of Park Row station to 77+20 (7,720 feet) at KC Junction. Then the Fulton Ferry branch was reverse tied at that point so that the chaining station at the ferry end of the line was 45+38 (4,538 feet). By this method, the distance from any point on the Fulton Street el to either terminal could be readily measured.

Sometimes two or more lines merge or abut but the chaining shouldn't be tied. For example, the Montague Street Tunnel Line BMT B is tied to Broadway Line BMT A at Canal Street, but BMT B returns to BMT A at DeKalb Avenue in Brooklyn. Since BMT B uses a longer route to reach the same location than BMT A does, the chaining numbers are different where the two lines rejoin. In this case, the BMT B chaining simply ends and the BMT A chaining is picked up again.

Following are tables describing the chaining lines of all three divisions, including defunct lines.

Many of these lines originally had individual chaining zero points as a result of the different companies that built and operated them. The BRT consolidated the chaining system subsequent to taking over these and many lines were again rechained when they were shifted from elevated to subway lines. These chaining lines and zero locations are accurate as of c. 1900 for lines chained from Park Row; as they were opened c. 1915–1920 for lines chained from 57th Street; as of line openings for other lines. Where chaining has changed since these chaining lines were established, the current chaining is shown.