97–98% of the most published climate researchers think humans are causing global warming.[1] Another study found 97.4% of publishing climatologists and just under 90% of all earth scientists think significant man made global warming is occurring.[2]

This is a list of scientists who have made statements that conflict with the mainstream scientific understanding of global warming as summarized by the Intergovernmental Panel on Climate Change and endorsed by other scientific bodies.

The listed notable scientists have made statements since the publication of the Third Assessment Report which disagree with one or more of the principal conclusions of the IPCC. Each scientist has published at least one peer-reviewed article in the natural sciences. The article need not have been written in recent years nor be in a field relevant to climate. She or he has made an attributable statement of disagreement in some forum (and is not merely included on a petition, survey, or list).

Climate scientists agree that the global average surface temperature has risen over the last century. The scientific consensus and scientific opinion on climate change were summarized in the 2001 Third Assessment Report of the Intergovernmental Panel on Climate Change (IPCC). The main conclusions on global warming were as follows:

Scientists in this section have made comments that it is not possible to project global climate accurately enough to justify the ranges projected for temperature and sea-level rise over the next century. They may not conclude specifically that the current IPCC projections are either too high or too low, but that the projections are likely to be inaccurate due to inadequacies of current global climate modeling. Their views on climate change are usually described in more detail in their biographical articles.

For more information on Dyson's views on this topic, see Dyson on global warming 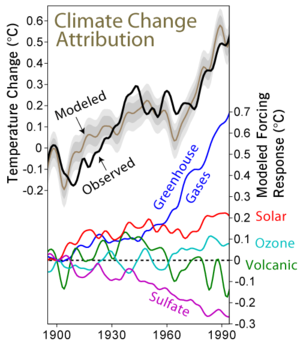 Attribution of climate change, based on Meehl et al. (2004), which represents the consensus view 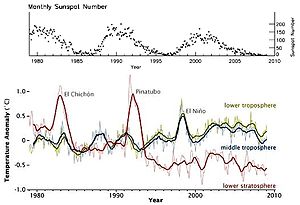 1979-2009: Over the past 3 decades, temperature has not correlated with sunspot trends. The top plot is of sunspots, while below is the global atmospheric temperature trend. El Chichón and Pinatubo were volcanoes, while El Niño is part of ocean variability. The effect of greenhouse gas emissions is on top of those fluctuations.

1860-1980: In contrast, earlier there was apparent similarity between trends in terrestrial sea surface temperatures and sunspots (related to solar magnetic activity: TSI varies slightly while UV and indirectly cosmic rays vary somewhat more).
Both consensus and non-consensus scientific views involve multiple climate change influences including solar variability and internal forcings, plus human influences such as greenhouse gas emissions and land use change.[14] However, they differ on issues such as how sensitive they think the climate system is to increases in greenhouse gases.[14][15]

Scientists in this section have made comments that the observed warming is more likely attributable to natural causes than to human activities. Their views on climate change are usually described in more detail in their biographical articles.

Scientists arguing that the cause of global warming is unknown

Scientists in this section have made comments that no principal cause can be ascribed to the observed rising temperatures, whether man-made or natural. Their views on climate change are usually described in more detail in their biographical articles.

Scientists arguing that global warming will have few negative consequences

Scientists in this section have made comments that projected rising temperatures will be of little impact or a net positive for human society and/or the Earth's environment. Their views on climate change are usually described in more detail in their biographical articles.

The lists above only include living scientists. The following are deceased. Their views on climate change are usually described in more detail in their biographical articles.