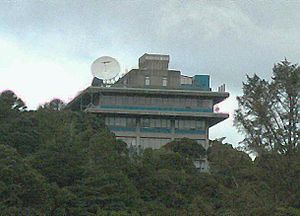 View of the MetService building in the Wellington Botanic Garden, from Tinakori Hill.

Meteorological Service of New Zealand Limited (MetService) was established as a State-Owned Enterprise in 1992. It employs about 221 staff and its headquarters are in Wellington, New Zealand. Prior to becoming an SOE, New Zealand's national meteorological service has existed in a number of forms since the appointment of the country's first Director of Meteorological Stations in August 1861.

As New Zealand's national meteorological service, MetService produces and issues forecasts and official weather warnings on behalf of New Zealand's Ministry of Transport and is certified by the Civil Aviation Authority of New Zealand.

MetService has been certified to the ISO 9001 standard since November 1995.

The weather forecasting service began in 1861, when a spate of shipwrecks prompted the Government to start a storm warning service as part of the then Marine Department.

During the 1980s there was increasing pressure on government funding for meteorology in New Zealand, together with a government-wide move to "user-pays" for specialised services, and to more autonomy and accountability for government departments. A combination of commercial competition in the deregulated market for meteorological services and reform of publicly funded science led to the establishment of MetService as a state-owned enterprise on 1 July 1992.

The world's national meteorological and hydrological Services work with the World Meteorological Organization (WMO), a specialised agency of the United Nations.

As part of the WMO World Weather Watch, MetService sends observational data gathered from the New Zealand region to other WMO member countries around the world. This is used as input to computer models of the weather at the world's major numerical weather prediction centres.

MetService operates a data collection network within New Zealand. It complies with recognised international standards as prescribed by the WMO over and around New Zealand. In particular, data are collected through:

The Chief Executive of MetService or their designate is the permanent representative of New Zealand with the WMO.

Forecasts and warnings funded by the New Zealand government include:

All warnings of hazardous weather for the South Pacific region, normally received from the Regional Specialized Meteorological Center in Nadi, Fiji, are forwarded to Radio New Zealand International and to the Ministry of Foreign Affairs and Trade.

MetService provides backup for the main warning and forecasting responsibilities of the Regional Specialized Meteorological Center in Nadi, Fiji, should that centre temporarily shut down or be cut off, possibly due to a direct hit by a cyclone. They also take over Primary warning responsibility should a cyclone move to the south of 25S.

The cooperative relationship among the world's national meteorological services enables the sharing of much weather information, including the output from global numerical weather prediction (NWP) models. Meteorologists at MetService routinely use information from the world's major modelling centres for day-to-day production of forecasts and weather warnings.

The global models that MetService uses generally provide reliable forecasts of weather features, like highs and lows, over forecast periods of several days; however, they are less effective at predicting small-scale weather features like sea breezes and localised showers. Such features are often strongly affected by the local geography, which tends to be poorly represented in the global models.

An effective way of dealing with this problem is to use another type of NWP model known as a limited-area model. MetService routinely runs a number of limited-area models based on both MM5 and WRF with lateral boundary conditions provided by each of the available global models. The primary model configuration for regional forecasting in New Zealand has a horizontal spacing between grid points of 12 km, which allows weather features down to about 50 km wide to be represented (highs and lows are thousands of kilometres wide). This domain is nested within a much larger domain of 60 km grid spacing, which enables the weather to be modelled over quite a large geographical area for reasonable computational cost.