Meridian owns and operates nine hydroelectric power stations and one wind farm in the South Island of New Zealand, three wind farms in the North Island, and one wind farm each on Ross Island, Antarctica and in South Australia. It is one of two major electricity generators to only generate electricity from renewable sources (the other being TrustPower), and the only electricity generator in New Zealand to commit itself to only generate electricity from renewable sources. In 2006, Greenpeace judged Meridian as the only "green" electricity company in New Zealand.[3] Furthermore, in 2007, Meridian was certified as the first carbon neutral energy company in New Zealand,[4][5] although the status was later revoked in 2008 when the company had to buy fossil fuel-generated electricity due to inadequate rainfall to fill its hydro lakes that year.[6]

Meridian originated from the breakup of the Electricity Corporation of New Zealand (ECNZ) in 1999 as a result of the reforms of the New Zealand electricity market. Meridian's share of ECNZ was corporatised as a state-owned enterprise with its own board of directors and with two Ministerial shareholders: the Minister of Finance and the Minister of State-Owned Enterprises. 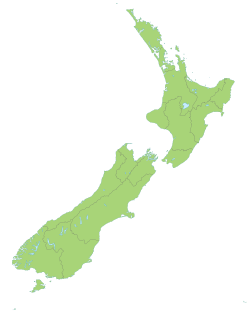 Meridian Energy owns and operates seven hydroelectric power stations in the South Island - six on the Waitaki River and at Manapouri. It also owns and operates six wind farms in New Zealand, Australia and Antarctica, and a single turbine in Brooklyn, Wellington. In total, Meridian has a total installed capacity of 2,639 MW in New Zealand and 71 MW overseas.

In addition, Meridian also operates some industrial combined heat and power stations in New Zealand, under its subsidiary Energy for Industry.

Projects being developed by Meridian Energy include the following.[13]