Helen Elizabeth Clark, ONZ (born 26 February 1950) is the Administrator of the United Nations Development Programme, the third-highest UN position, [4] and was the 37th Prime Minister of New Zealand for three consecutive terms from 1999 to 2008. To date she is the fifth longest serving Prime Minister of New Zealand. She led the Labour Party from 1993 until it lost the 2008 general election. Before resigning from Parliament in April 2009, Clark was Labour's foreign affairs spokeswoman and MP for the Mount Albert electorate which she had held since 1981.[5] Forbes magazine ranked her 20th most powerful woman in the world in 2006.[6]

Clark was the eldest of four daughters of a farming family at Te Pahu in the Waikato Region. Her mother, Margaret McMurray, of Irish birth, was a primary school teacher. Her father, George, was a farmer. Clark studied at Te Pahu Primary School, at Epsom Girls' Grammar School in Auckland and at the University of Auckland, where she majored in politics and graduated with an MA (Honours) in 1974. Her thesis focused on rural political behaviour and representation.[7]

As a teenager Clark became politically active, protesting against the Vietnam War and campaigning against foreign military bases in New Zealand. She has declared herself agnostic.[3]

In 1971 Clark assisted Labour candidates to the Auckland City Council.[8] Clark was a junior lecturer in political studies at the University of Auckland from 1973 to 1975. In 1974 she sought the nomination for the Auckland Central electorate, but lost to Richard Prebble.[8] She instead stood for the Piako, a National safe seat.[9] Clark studied abroad on a University Grants Committee post-graduate scholarship in 1976, and then lectured in political studies at Auckland again while undertaking her PhD (which she never completed) from 1977 until her election to Parliament in 1981 (her father supported the National Party that election).

She married sociologist Peter Davis, her partner of five years at that time, shortly before that election (under pressure from some members of the New Zealand Labour Party to marry despite her own feelings about marriage – her biography reports that she cried throughout the ceremony, although she attributes that to a headache).[10] Dr Davis currently[update] is a professor in medical sociology and heads the Sociology Department at the University of Auckland.

Helen Clark first gained election to the New Zealand House of Representatives in the 1981 general election as one of four women who entered Parliament on that occasion. In winning the Mount Albert electorate in Auckland, she became the second woman elected to represent an Auckland electorate, and the seventeenth woman elected to the New Zealand Parliament. At the 2005 general election Clark won 66% of the electorate votes, or 20,918 votes with a 14,749 majority.[2] During her first term in the House (1981–1984), she became a member of the Statutes Revision Committee. In her second term (1984–1987), she chaired the Select Committee on Foreign Affairs and the Select Committee on Disarmament and Arms Control, both of which combined with the Defence Select Committee in 1985 to form a single committee.

In 1987, Clark became a Cabinet Minister in the Fourth Labour Government, led by David Lange (1984–1989), Geoffrey Palmer (1989–1990) and Mike Moore (1990), first as Minister of Housing and as Minister of Conservation, then as Minister of Health and later as Deputy Prime Minister.

Leader of the Opposition

From October 1990 until December 1993 Clark held the posts of Deputy Leader of the Opposition, Opposition spokesperson for Health and Labour and member of the Social Services Select Committee and of the Labour Select Committee. After the National Party won the 1993 general election with a majority of one seat, Clark challenged Mike Moore for the leadership of the parliamentary Labour Party and became Leader of the Opposition on 1 December 1993. She led the Opposition during the National-led Governments of Jim Bolger (1990–1997) and Jenny Shipley (1997–1999). 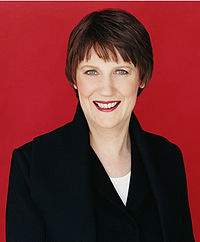 When the New Zealand Labour Party came into office as part of a coalition following the 1999 election, Clark became the second female Prime Minister of New Zealand and the first to have won office at an election. (The previous Prime Minister, Jenny Shipley took office as the result of a mid-term party-leadership challenge.) During her term in office women held a number of prominent elected and appointed offices in New Zealand, such as the Governor-General, Speaker of the House of Representatives and Chief Justice.

Clark was Prime Minister and Minister for Arts, Culture and Heritage from 1999 until 2008. She also had ministerial responsibility for the New Zealand Security Intelligence Service and for Ministerial Services. Her particular interests included social policy and international affairs.

As Prime Minister, Helen Clark was a member of the Council of Women World Leaders, an International network of current and former women presidents and prime ministers whose mission is to mobilise the highest-level women leaders globally for collective action on issues of critical importance to women and equitable development.

As Leader of the Labour Party, Clark negotiated the formation of successive minority coalition governments. Even though some commentators[citation needed] saw stable government within the relatively new MMP electoral system as unlikely, Clark's supporters[citation needed] credit her with maintaining three terms of stable MMP government.

In 2000, Labour MP Chris Carter investigated the background of one of Clark's Cabinet colleagues, Māori Affairs Minister Dover Samuels. During the investigation, Clark referred to John Yelash as a murderer. However, the court system had convicted Yelash of manslaughter. Yelash sued Clark for defamation, resulting in an out-of-court settlement. 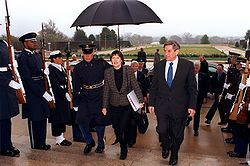 Clark with Paul Wolfowitz at the Pentagon on 26 March 2002.

In 2000, the then Police Commissioner, Peter Doone, resigned after the Sunday Star-Times alleged he had prevented the breath testing of his partner Robyn, who had driven the car they occupied, by telling the officer "that won't be necessary". Both Doone and the officer involved denied this happened. Doone sued the Sunday Star-Times for defamation in 2005 but the paper revealed they had checked the story with Clark. She confirmed this, but denied that she had made attempts to get Doone to resign and defended being the source as "by definition I cannot leak". Helen Clark also responded by saying that National's friends had funded Mr Doone's defamation-suit.[11] Opinion on the significance of this incident varied.[12]

In a report in the People's Daily, Chinese President Jiang Zemin referred to Clark as an "old friend". He hoped to "establish bilateral long-term and stable overall cooperative relations with a healthy development geared to the 21st century", and "broad prospects for bilateral economic cooperation". Clark had strongly supported China's entry into the WTO.[13]

In 1999, Clark was involved in a defamation case in the High Court of New Zealand with Auckland orthopaedic surgeon Joe Brownlee, resulting in Clark making an unreserved apology. The case centered on a press statement issued by Clark criticising Brownlee, triggered by a constituent's complaint over the outcome of a hip replacement. Clark admitted the criticism was unjustified in that the complication suffered by her constituent was rare, unforeseen and unavoidable.[14]

The Alliance Party split in 2002 over the Government's commitment of New Zealand troops to the War in Afghanistan, leading to the imminent dissolution of Labour's coalition of that party.[15] As a consequence, Clark called an early election and then went into coalition with Jim Anderton's Progressive Party, a spin-off of the Alliance Party (2002, with parliamentary confidence and supply coming from United Future and a "good-faith" agreement with the Green Party).

Clark believes a New Zealand republic is "inevitable",[16] and her term in office saw a number of alleged moves in this direction, under her government's policy of building national identity. Examples include the abolition of appeals to the Privy Council in London and the foundation of the Supreme Court of New Zealand, the abolition of titular Knighthood and Damehood honours (restored in 2009), and the abolition of the title "Queen's Counsel" (replaced by "Senior Counsel").

In 2002, Clark took an unprecedented step and said sorry for New Zealand's treatment of Samoa during the colonial era. Clark's apology was made in Apia during the 40th anniversary of Samoa's independence and televised live to New Zealand where Samoans applauded the prime minister's gesture.[17]

In March 2003, referring to the U.S. led coalition's actions in the Iraq War, Clark told the newspaper Sunday Star Times that, "I don't think that 11 September under a Gore presidency would have had this consequence for Iraq." She later sent a letter to Washington apologising for any offence that her comment may have caused.[18]

On 17 July 2004, a motorcade involving police, Diplomatic Protection Squad, and Ministerial Services staff reached speeds of up to 172 km/h when taking Clark and Cabinet Minister Jim Sutton from Waimate to Christchurch Airport so she could attend a rugby union match in Wellington.[19] The courts subsequently convicted the drivers involved for driving offences, but appeals resulted in the quashing of these convictions in December 2005 and August 2006.[20] Clark said that she was busy working in the back seat and had no influence or role in the decision to speed and did not realise the speed of her vehicle.[21] 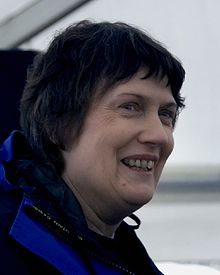 Helen Clark at the opening of Waikato River Trail at Whakamaru, 2007

In 2005, following the election of that year, the Labour Party and the Progressive Party renewed their coalition, gaining supply-and-confidence support from both New Zealand First and United Future in exchange for giving the leaders of those parties ministerial positions outside Cabinet.

On 8 February 2008, Clark became the longest serving leader of the Labour Party in its history (although some dispute exists over when Harry Holland became leader), having served for 14 years, 69 days,[22][i] by 26 October 2008 she had passed Holland's longest possible term and her position as longest serving Labour Party leader was put beyond doubt. Clark conceded defeat following the 2008 general election to John Key and announced that she was standing down as Labour Party leader.[23] On 11 November 2008 Clark was replaced by Phil Goff as leader of the Labour Party.[24]

Mid term, Clark signed a painting for a charity-auction that someone else had painted. Opposition politicians referred the matter to the Police[26] who found evidence for a prima facie case of forgery, but determined that it was not in the public interest to prosecute.[27]

Helen Clark became the Administrator of the United Nations Development Programme on 17 April 2009, and is the first woman to lead the organization. She is also the Chair of the United Nations Development Group, a committee consisting of the heads of all UN funds, programmes and departments working on development issues.[28] The current government of New Zealand strongly supported her nomination, along with Australia, the Pacific Island nations and Prime Minister of the United Kingdom, Gordon Brown. She also received the support of the five countries on the UNDP board (Iran, Haiti, Serbia, The Netherlands and Tanzania) and was unanimously confirmed by the General Assembly on 31 March. She was officially sworn in by UN Secretary-General Ban Ki-moon on 27 April 2009.[29][30][31][32]

In this position, Forbes deemed her the 61st most powerful woman in the world.[33]

In January 2008 Clark won the United Nations Environment Programme Champions of the Earth award in recognition of the government’s promotion of sustainability initiatives.[37]

Clark is an Honorary Member of The International Raoul Wallenberg Foundation.[38]

In January 2009, two months after losing office, Clark was voted Greatest Living New Zealander in an opt-in website poll run by the New Zealand Herald. In a close race she received 25 percent of the vote, ahead of Victoria Cross recipient Willie Apiata at 21 percent. Current Prime Minister John Key said he was not surprised by the poll, saying "... she is well thought of as a New Zealand Prime Minister."[41]

In April 2009 she was awarded honorary Doctor of Laws degree by University of Auckland.[42]

A satirical book, later adapted as a play, titled On the conditions and possibilities of Helen Clark taking me as her young lover was published in 2005. Clark has also guest-starred on bro'Town, the New Zealand animated television series.

This is a book intended for children.

A paper by John Henderson and Seishi Gomibuchi is entitled: "The leadership styles of Helen Clark and Don Brash."