Centrifuge
This article is about the scientific device. For the Christian camp, see Centrifuge (camps). For spin direction in quantum mechanics, see Spin (physics)#Spin direction. 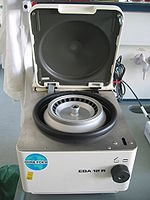 A centrifuge is a piece of equipment, generally driven by an electric motor (some older models were spun by hand), that puts an object in rotation around a fixed axis, applying a force perpendicular to the axis. The centrifuge works using the sedimentation principle, where the centripetal acceleration causes more dense substances to separate out along the radial direction (the bottom of the tube). By the same token, lighter objects will tend to move to the top (of the tube; in the rotating picture, move to the centre).

In the picture shown, the rotating unit, called the rotor, has fixed holes drilled at an angle (to the vertical). Test tubes are placed in these slots and the motor is spun. As the centrifugal force is in the horizontal plane and the tubes are fixed at an angle, the particles have to travel only a little distance before they hit the wall and drop down to the bottom. These angle rotors are very popular in the lab for routine use.

Protocols for centrifugation typically specify the amount of acceleration to be applied to the sample, rather than specifying a rotational speed such as revolutions per minute. This distinction is important because two rotors with different diameters running at the same rotational speed will subject samples to different accelerations. During circular motion the acceleration is the product of the radius and the square of the angular velocity ω, and the acceleration relative to "g" is traditionally named "relative centrifugal force" (RCF). The acceleration is measured in multiples of "g" (or × "g"), the standard acceleration due to gravity at the Earth's surface, a dimensionless quantity given by the expression:

is the rotational radius,

is the rotational speed, measured in revolutions per unit of time. In physics, this is usually denoted

and is called the frequency of revolution.

This relationship may be written as

is the rotational radius measured in centimetres (cm), that is,

is rotational speed measured in revolutions per minute (RPM), that is, 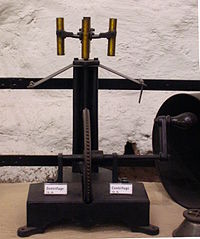 There are at least six types of centrifuge:[citation needed]

Industrial centrifuges may otherwise be classified according to the type of separation of the high density fraction from the low density one :

Simple centrifuges are used in chemistry, biology, and biochemistry for isolating and separating suspensions. They vary widely in speed and capacity. They usually comprise a rotor containing two, four, six, or many more numbered wells within which the samples containing centrifuge tips may be placed.

Other centrifuges, the first being the Zippe-type centrifuge, separate isotopes, and these kinds of centrifuges are in use in nuclear power and nuclear weapon programs.

Gas centrifuges are used in uranium enrichment. The heavier isotope of uranium (uranium-238) in the uranium hexafluoride gas tends to concentrate at the walls of the centrifuge as it spins, while the desired uranium-235 isotope is extracted and concentrated with a scoop selectively placed inside the centrifuge. It takes many thousands of centrifuges to enrich uranium enough for use in a nuclear reactor (around 3.5% enrichment), and many thousands more to enrich it to weapons-grade (above 90% enrichment) for use in nuclear weapons.

The 20 G centrifuge at the NASA Ames Research Center

Human centrifuges are exceptionally large centrifuges that test the reactions and tolerance of pilots and astronauts to acceleration above those experienced in the Earth's gravity.

The US Air Force at Holloman Air Force Base, New Mexico operates a human centrifuge. The centrifuge at Holloman AFB is operated by the aerospace physiology department for the purpose of training and evaluating prospective fighter pilots for high-g flight in Air Force fighter aircraft.

The use of large centrifuges to simulate a feeling of gravity has been proposed for future long-duration space missions. Exposure to this simulated gravity would prevent or reduce the bone decalcification and muscle atrophy that affect individuals exposed to long periods of freefall. An example of this can be seen in the film 2001: A Space Odyssey.

The geotechnical centrifuge is used for simulating blasts and earthquake phenomena.[1] For a discussion of their design, see Geotechnical Centrifuges by Philip Turner.