Cocke County is a county located in the U.S. state of Tennessee. The county forms the Newport, Tennessee, Micropolitan Statistical Area which is, as of December 2005, considered a component of the Knoxville-Sevierville-La Follette, TN, Combined Statistical Area.[1] As of 2010, the population was 35,662. Its county seat is Newport.[2] 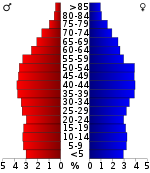 Before the arrival of European settlers, the area that is now Cocke County probably was inhabited by Cherokees. The first recorded European settlement in the county was in 1783 when land near the fork of the French Broad and Big Pigeon rivers was cleared and cultivated. The earliest European settlers were primarily Scots-Irish, Dutch, and Germans who came to the area over the mountains from the Carolinas or through Virginia from Pennsylvania and other northern states.

The county was established by an Act of the Tennessee General Assembly on October 9, 1797, from a part of Jefferson County, Tennessee. It was named for William Cocke, one of the state's first United States Senators.

Cocke County had a long-standing reputation in the surrounding area as a center of illegal activity, particularly the production of and trafficking in moonshine, both during Prohibition and in subsequent years, when most of East Tennessee, including Cocke County, remained officially "dry". The county also developed a reputation for prostitution in the years during and after World War II.[5]

A series of raids beginning in 1969 targeted both illegal liquor sales and alleged brothels. There were allegations of involvement by local law enforcement officials.[5]

In the early 1980s, cannabis production and smuggling of illegal drugs were reported in the area. For example, in 1982 more than 40,000 marijuana plants with an estimated value of $15 million were found growing at one site. In 1983 state and federal probes led to the discovery of an interstate prostitution ring and the FBI's arresting the county sheriff and 43 other people on cocaine conspiracy charges. Agents also recovered more than $2 million in drugs and stolen vehicles and heavy equipment.[5]

On the afternoon of June 11, 2005, more than 100 federal and state agents, led by the FBI and supported by snipers and helicopters, raided and closed a large cock fighting ring in Cocke County. The so-called "Del Rio Cockfighting Pit" was described by officials as the United States' largest and oldest illegal cockfighting pit. The agents seized about $40,000 in cash and issued criminal citations to 143 people. More than 300 fighting roosters were euthanized during the raid.

The novel Christy and the television series of the same name are based on historical events, actual people, and localities of Cocke County. The fictional small town of El Pano, where the novel begins, is based on the existing village of Del Rio, Tennessee. The fictional Cutter Gap, where most of the plot unfolds, represents the locale now known as Chapel Hollow. Several area landmarks associated with the story are marked for visitors, including the site of the Ebenezer Mission in Chapel Hollow, which is located off the Old Fifteenth Rd., about 5 miles (8.0 km) from Del Rio.