The culture of Bengal encompasses cultures in the Bengal region, which today consists of the independent nation of Bangladesh (East Bengal), and the Indian federal republic's constitutive state of West Bengal. The two geographical entities share many cultural traits which root from their historical association. 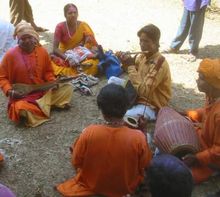 Ancient Bengal was the seat of Buddhism. During the Mauryan period, Poundravardhana, corresponding northern Bengal, was the seat of culture and political activities; and in the third century B.C. both of Buddhism and Jainism were prevalent in northern Bengal. This Buddhist tradition continued for centuries up to the end of the Pala period.The period was marked by the establishment of some Buddhist colleges and universities, the remains of one of which still can be found at Paharpur. From the twelfth century, under royal patronage of the Sena rulers, there was the revival of Brahmanical Hinduism; and because of the introduction of Kulinism and torture on the Buddhists and Yogis, the path was made ready for the spread of Islam from the thirteenth century onward. With the elapse of time, Shaktism became very prominent in Bengal; and from the end of the fifteenth century, Vaishnavism also grew to be popular under the leadership of Shri Chaitanya.(Ref.Sailen Debnath, 'Essays on Cultural History of North Bengal', ISBN 9788186860427).Centuries after the demise of Chaitanya, Bhakti Vedantaswami Prabhupada made Bengal's Vaishnavism a factor of Krishna consciosuness all over the world. There are many bhajans (devotional prayers to Bhagavan, Supreme Personality of Godheadm Krsna, and his devotees), which are written in Bengali language.

The Bangla language boasts a rich literary heritage, shared with neighboring West Bengal. Bengal has a long tradition in folk literature, evidenced by the Charyapada, Mangalkavya, Shreekrishna Kirtana, Maimansingha Gitika, Thakurmar Jhuli, and stories related to Gopal Bhar. Bangla literature in the medieval age was often either religious (e.g. Chandidas), or adaptations from other languages (e.g. Alaol). In the nineteenth and twentieth century, Bengali literature was modernized in the works of authors such as Bankim Chandra Chattopadhyay, Michael Madhusudan Dutt, Rabindranath Tagore, Kazi Nazrul Islam and Sharat Chandra Chattopadhyay. Bengali culture took a revolutinary turn with the advent of about 30 writers, poets, dramatists and artists in 1960s who were called as the Hungryalists.

The Baul tradition is a unique heritage of Bangla folk music, which has also been influenced by regional music traditions.[1] Other folk music forms include Gombhira, Bhatiali and Bhawaiya. Folk music in Bengal is often accompanied by the ektara, a one-stringed instrument. Other instruments include the dotara, dhol, flute, and tabla. The region also has an active heritage in North Indian classical music. Gurusaday Dutt did a lot for the revival of folk art and folk dances of Bengal in the early twentieth century.

Rabindra Sangeet, songs by Rabindranath Tagore, use Indian classical music and traditional folk-music as sources. In Bengali cultural life they have a strong influence. Nazrul Geeti, songs by Kazi Nazrul Islam, are also of great significance in Bengali culture.[2]

Bengali women commonly wear the shaŗi , often distinctly designed according to local cultural customs. In urban areas, many women and men wear Western-style attire. Men also wear traditional costumes such as the panjabi with dhuti. As time goes by the lungi, a kind of long skirt has replaced the dhuti, and now lungi is widely worn by Bangladeshi men.

The two Eids, Eid ul-Fitr and Eid ul-Azha are the largest festivals in Bangladesh. Durga Puja in October is the most popular festival in the West Bengal.[5] Pohela Baishakh (the Bengali New Year), Rathayatra, Dolyatra or Basanta-Utsab, Nobanno, Poush parbon (festival of Poush), Kali puja, Laxmi puja are other major festivals.

Bengali cinema/Bangla cinema are made both in Kolkata and Dhaka. Mainstream Hindi films of Bollywood are also quite popular in West Bengal and Bangladesh. The Bengali film industry is also known for art films. Its long tradition of filmmaking has produced acclaimed directors like Satyajit Ray, Tanvir Mokammel, Mrinal Sen and Ritwik Ghatak. Contemporary directors include Buddhadev Dasgupta, Goutam Ghose, Aparna Sen, Tarek Masud and Rituparno Ghosh. Around 200 dailies are published in Bangladesh, along with more than 1800 periodicals. However, regular readership is low, about 15% of the population.[6] West Bengal had 559 published newspapers in 2005,[7] of which 430 were in Bangla.[7] Ananda Bazar Patrika, published from Kolkata with 1,130,167 daily copies, has the largest circulation for a single-edition, regional language newspaper in India.[7]

Cricket and football are popular sports in the Bengal region. Kolkata is one of the major centers for football in India. Sourav Ganguly is an internationally known cricketer from West Bengal.[8] Local games include sports such as Kho Kho and Kabaddi, the latter being the national sport of Bangladesh.