This is a list of deities of ancient Rome, including those who are known to have received cult within the city of Rome, the ager Romanus, or the provinces of the Empire under a Latin or Latinized name. A comprehensive alphabetical list follows a survey of theological groups as constructed by the Romans themselves.[1] For cult pertaining to deified Roman emperors, see Imperial cult.

In describing the lectisternium of the Twelve Great Gods in 217 BC, the Augustan historian Livy places the deities in gender-balanced pairs:[4]

Divine male-female complements such as these, as well as the anthropomorphic influence of Greek mythology, contributed to a tendency in Latin literature to represent the gods as "married" couples or (as in the case of Venus and Mars) lovers.

Di Consentes on an altar

Varro uses the name Dii Consentes for the 12 deities, six male-female pairs, whose gilded images stood in the forum.[5] Although individual names are not listed, they are assumed to be the deities of the lectisternium. A fragment from Ennius, within whose lifetime the lectisternium occurred, lists the same 12 deities by name, though in a different order from that of Livy: Juno, Vesta, Minerva, Ceres, Diana, Venus, Mars, Mercurius, Jove, Neptunus, Vulcanus, Apollo.[6]

The Dii Consentes are sometimes seen as the Roman equivalent of the Greek Olympians. The meaning of Consentes is subject to interpretation, but is usually taken to mean that they form a council or consensus of deities.

At the beginning of his treatise on farming, Varro[7] gives a list of twelve deities who are vital to agriculture. These make up a conceptual or theological grouping, and are not known to have received cult collectively. They are: 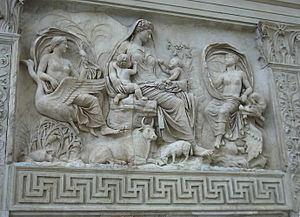 Allegorical scene with Roman deities from the Augustan Altar of Peace

In his Georgics, a collection of poetry on agrarian themes, Vergil gives a list influenced by literary Hellenization and Augustan ideology:[8]

The poet proposes that the divus Julius Caesar be added as a thirteenth. 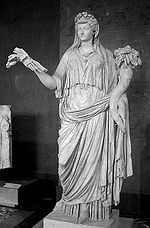 Livia, wife of Augustus, dressed as the goddess Ops

Varro, who was himself of Sabine origin, gives a list of Sabine gods who were adopted by the Romans:

Elsewhere, Varro claims Sol Indiges, who had a sacred grove at Lavinium, as Sabine but at the same time equates him with Apollo.[15] Of those listed, he writes, "several names have their roots in both languages, as trees that grow on a property line creep into both fields. Saturn, for instance, can be said to have another origin here, and so too Diana."[16] Varro makes various claims for Sabine origins throughout his works, some more plausible than others, and his list should not be taken at face value.[17] But the importance of the Sabines in the early cultural formation of Rome is evidenced, for instance, by the bride abduction of the Sabine women by Romulus's men, and in the Sabine ethnicity of Numa Pompilius, second king of Rome, to whom are attributed many of Rome's religious and legal institutions.[18] Varro, however, says that the altars to most of these gods were established at Rome by King Tatius as the result of a vow (votum).[19]

"The elevated or august one" (feminine form), an honorific and title associated with the development and dissemination of Rome's Imperial cult and applied to Roman Empresses, whether living, deceased or deified as divi. The first Augusta was Livia, wife of Octavian, and the title is then shared by various state goddess including Bona Dea, Ceres, Juno Minerva and Ops; and by many minor, local goddesses and the personifications of Imperial virtues such as Pax and Victoria, both held to be essentially female.

"The elevated or august one" (masculine form), a honorific and title awarded to Octavian in recognition of his unique status, the extraordinary range of his powers, and the apparent divine approval of his principate. After his death and deification, the title was awarded to each of his successors. It also became a near ubiquitous title or honour for various minor local deities, including the Lares Augusti of local communities, and obscure provincial deities such as the North African Marazgu Augustus; and for divine personifications of the Emperor's virtues. The extension of this Imperial honorific to major and minor deities of Rome and her provinces is considered a ground-level feature of Imperial cult.

The Celestial or Heavenly one (feminine form), thus "Queen of Heaven". From the middle Imperial era, Ceres, Isis, Juno, Venus and other goddesses share the title, as different aspects of a single, supreme heavenly Goddess (Dea Caelestis), identified with the constellation of the Virgin who holds the divine balance of justice.

"The Great Mother", the title given Cybele in her Roman cult, though not exclusive to her. Some Roman literary sources accord the same title to Maia, inferring that both goddesses are aspects of a supreme "Great Mother".

"Father", a title given various deities, to signify their preeminence and paternal care, and the filial respect due to them. An epithet of Dis Pater, Jupiter and Liber Pater, among others. 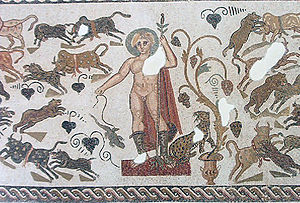 A "lizard-slayer" Apollo on a mosaic from Roman Africa

Diana Nemorensis on a denarius 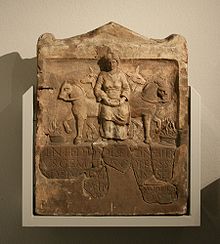 Roman statue of the infant Hercules strangling a snake 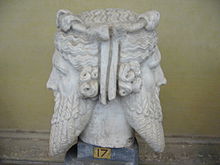 A janiform sculpture, perhaps of Janus 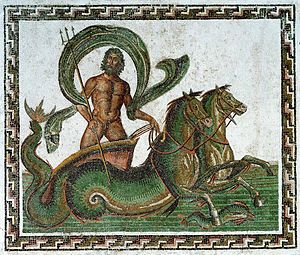 Neptune velificans on a 3rd-century mosaic 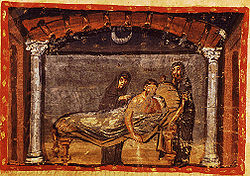 Aeneas and the Penates, from a 4th-century manuscript 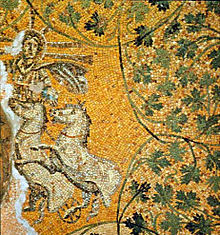 Sol Invictus, or Christ depicted in his guise 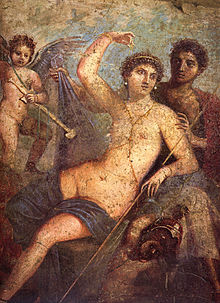 Venus, Mars, and Cupid on a wall painting from Pompeii