OCC is the largest of Michigan's community colleges.[1]

The teams are known as the Raiders and compete in the National Junior College Athletic Association (NCJAA) and the Michigan Community College Athletic Association (MCCAA). Men's varsity sports include basketball, cross-country, and golf; women's varsity sports include basketball, cross-country, softball, tennis, and volleyball; men's club sports include soccer. OCC also has a competitive speech and performance team (the forensics team) that has had both State and National champions. OCC also has a vibrant and growing performing arts program with a free 2-day Performance Festival event each February and regular theater shows. [1] OCC also has a nationally acclaimed Culinary Studies Institute. [2] OCC also is regionally recognized for its outstanding ABA [3] approved paralegal program. [4] 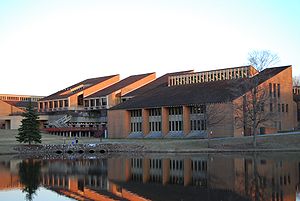 In September 1967, the award-winning Orchard Ridge Campus opened. First leased in temporary facilities in Oak Park, the Southeast Campus System expanded through the purchase and remodeling of buildings at a second site in Royal Oak.

In 1980, the Oak Park facilities were replaced by a new campus in Southfield.

The Royal Oak buildings were replaced by a new campus complex which opened in the fall of 1982. [2]

OCC is the largest of Michigan’s 28 community colleges

OCC has the state’s largest freshman class and the 3rd largest undergraduate enrollment, following The University of Michigan and Michigan State University.

OCC awarded nearly 2,000-plus degrees and certificates at its May 2009 commencement

OCC has one of the highest transfer rates, among all Michigan community colleges.

OCC has the state’s largest English as a Second language, Nursing and Workforce Development programs

OCC is accredited by the Higher Learning Commission (HLC) of the North Central Association of Colleges and Schools.

With over 850 full-time employees and almost equal number of part-time staff and adjunct faculty, OCC is one of Oakland County’s larger employers

In addition there are 2 administration buildings to serve the college