Compressed-air propulsion may also be incorporated in hybrid systems, e.g., battery electric propulsion and fuel tanks to recharge the batteries. This kind of system is called a hybrid-pneumatic electric propulsion. Additionally, regenerative braking can also be used in conjunction with this system.

One can buy the vehicle with the engine or buy an engine to be installed in the vehicle. Typical air engines use one or more expander pistons or rotary expander like the Quasiturbine. In some applications it is advantageous to heat the air, or the engine, to increase the range or power.

The tanks must be designed to safety standards appropriate for a pressure vessel, such as ISO 11439.[2]

The storage tank may be made of:

The fiber materials are considerably lighter than metals but generally more expensive. Metal tanks can withstand a large number of pressure cycles, but must be checked for corrosion periodically.

The tanks may be refilled at a service station equipped with heat exchangers, or in a few hours at home or in parking lots, plugging the car into the electrical grid via an on-board compressor. The cost of driving such a car is typically projected to be around €0.75 per 100 km, with a complete refill at the "tank-station" at about US$3.

Compressed air has a low energy density. In 300 bar containers, about 0.1 MJ/L and 0.1 MJ/kg is achievable, comparable to the values of electrochemical lead-acid batteries. While batteries can somewhat maintain their voltage throughout their discharge and chemical fuel tanks provide the same power densities from the first to the last litre, the pressure of compressed air tanks falls as air is drawn off. A consumer-automobile of conventional size and shape typically consumes 0.3-0.5 kWh (1.1-1.8 MJ) at the drive shaft[4] per mile of use, though unconventional sizes may perform with significantly less.

Like other non-combustion energy storage technologies, an air vehicle displaces the emission source from the vehicle's tail pipe to the central electrical generating plant. Where emissions-free sources are available, net production of pollutants can be reduced. Emission control measures at a central generating plant may be more effective and less costly than treating the emissions of widely dispersed vehicles.

Since the compressed air is filtered to protect the compressor machinery, the air discharged has less suspended dust in it, though there may be carry-over of lubricants used in the engine.

Compressed air has been used since the 19th century to power mine locomotives and trams in cities such as Paris (via a central, city-level, compressed air energy distribution system), and was previously the basis of naval torpedo propulsion.

In 1903, the Liquid Air Company located in London England manufactured a number of compressed-air and liquified-air cars. The major problem with these cars and all compressed-air cars is the lack of torque produced by the "engines" and the cost of compressing the air.[6]

Recently several companies have started to develop compressed air cars, although none have been released to the public, or have been tested by third parties.

Compressed-air vehicles are comparable in many ways to electric vehicles, but use compressed air to store the energy instead of batteries. Their potential advantages over other vehicles include:

Like the modern car and most household appliances, the principal disadvantage is the indirect use of energy. Energy is used to compress air, which - in turn - provides the energy to run the motor. Any conversion of energy between forms results in loss. For conventional combustion motor cars, the energy is lost when oil is converted to usable fuel - including drilling, refinement, labor, storage, eventually transportation to the end-user. For compressed-air cars, energy is lost when electrical energy is converted to compressed air. 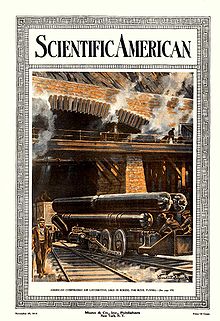 Three mechanical engineering students from San Jose State University; Daniel Mekis, Dennis Schaaf and Andrew Merovich, designed and built a bike that runs on compressed air. The total cost of the prototype was under $1000 and was sponsored by Sunshops (on the Boardwalk in Santa Cruz, California) and NO DIG NO RIDE (from Aptos, California.). The top speed of the maiden voyage in May 2009 was 23 mph. http://www.youtube.com/watch?v=NBeky4EuyBc

"Ku:Rin" named air-compressed three wheeler vehicle is created by TOYOTA in 2011. The speciality about this vehicle is it has registered a record breaking highest speed 129.2 km/h (80mph) even if it has engine which uses only compressed-air. This car was developed by the toyota companies "Dream car workshop". This car is nicknamed as "sleek rocket" , or "pencil shaped rocket".[14]

A compressed-air powered motorcycle, called the Green Speed Air Powered Motorcycle was made by Edwin Yi Yuan, based on the Suzuki GP100 and using the Angelo Di Pietro compressed air engine.[15]

As part of the TV-show Planet Mechanics, Jem Stansfield and Dick Strawbridge have converted a regular scooter to a compressed air moped.[16] This has been done by equipping the scooter with a compressed-air engine and air tank.[17]

Several companies are investigating and producing prototypes, and one plans to offer cars late 2009, early 2010.[18]

MDI makes MultiCATs vehicle that can be used as buses or trucks. RATP has also already expressed an interest in the compressed-air pollution-free bus.

Compressed-air locomotives are a kind of fireless locomotive and have been used in mining[19] and tunnel boring.[20]

Currently, no water or air vehicles exist that make use of the air engine. Historically certain torpedoes were propelled by compressed-air engines.