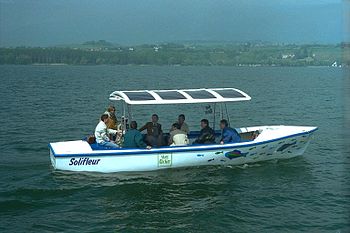 While a significant majority of water vessels are powered by diesel engines, with sail power and gasoline engines also remaining popular, boats powered by electricity have been used for over 120 years. Electric boats were very popular from the 1880s[1] until the 1920s, when the internal combustion engine took dominance. Since the energy crises of the 1970s, interest in this quiet and potentially renewable marine energy source has been increasing steadily again, especially as solar cells became available, for the first time making possible motorboats with an infinite range like sailboats. The first practical solar boat was probably constructed in 1975 in England.[2] 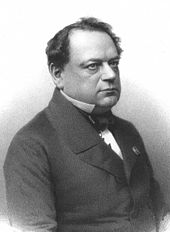 The first electric boat was developed by Moritz von Jacobi in 1839 in St Petersburg, Russia - a 24-foot (7.3 m) boat which carried 14 passengers at 3 mph. It was successfully demonstrated to Emperor Nicholas I of Russia on the Neva River.

It took more than 30 years of battery and motor development before they began to be deployed in any numbers. In 1886 an electric boat crossed the English Channel both ways in 8 hours. By 1889 the first 6 electric charter boats were working on the Thames and in the 1893 Chicago World Fair 55 carried more than a million passengers.[3][4]

Electric boats had an early period of popularity between around 1890 and 1910, before the emergence of the internal combustion engine drove them out of most applications. For example, an 1893 pleasure map of the Thames shows 8 "charging stations for electric launches" between Kew (Strand-on-the-Green) and Reading (Caversham).[1]

Most of the electric boats of this era were small passenger boats on non-tidal waters at a time when the only power alternative was steam. One of the largest in Britain, and the only surviving example, is the Mary Gordon[5] which was built on the Thames for Leeds City Council for use on the Roundhay Park Lake. It was 52 feet (16 m) long and could take 75 passengers, and is now being restored. 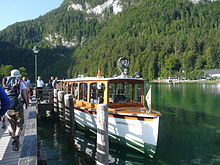 An electric passenger launch on Lake Königssee in Germany

In a few situations, the use of electric boats has persisted from the early 20th century to the present day. One of these is on the Königssee lake, near Berchtesgaden in south-eastern Germany. Here the lake is considered so environmentally sensitive that steam and motor boats have been prohibited since 1909. Instead the Bayerische Seenschifffahrt company and its predecessors have operated a fleet of electric launches to provide a public passenger service on the lake.[6][7]

In the US, the Electric Boat Company was founded in 1899 and built the first submarine purchased by the U.S. Navy in 1900.[8] Since then, electric power has been used almost exclusively for powering submarines underwater, although diesel was used for powering them on the surface until the development of diesel-electric transmission by the US Navy in 1928. The Electric Boat Company eventually became General Dynamics Corporation in 1952.

The use of combined fuel and electric propulsion has gradually been extended over the years to the extent that some modern liners such as the Queen Mary 2 use only electric motors, powered by diesel and gas turbine engines. The advantages include being able to run the fuel engines at an optimal speed at all times and being able to mount the electric motor in a pod which may be rotated by 360° for increased manoeuvrability.

The use of electricity alone to power boats stagnated apart from their outboard use as trolling motors until the Duffy Electric Boat Company of California started mass producing small electric craft in 1968. Duffy Boats has produced over 10,000 electric powered boats to date and is producing well over 300 per year today. It wasn't until the 1980s that the Electric Boat Association was formed and solar powered boats started to emerge.

The main components of the drive system of any electrically powered boat are similar in all cases, and similar to the options available for any electric vehicle.

Electric energy has to be obtained for the battery bank from some source. 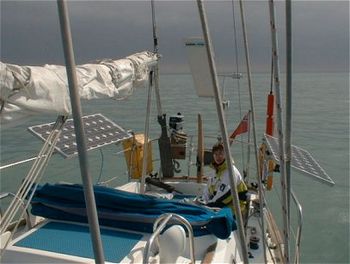 Solar panels deployed on a small yacht at sea

In all cases, a charge regulator is needed. This ensures that the batteries are charged at the maximum rate that they safely can stand when the power is available. It also ensures that they are not overcharged when nearing full charge and not overheated when a large charge current becomes available.

There have been significant technical advances in battery technology in recent years, and more are to be expected in the future. 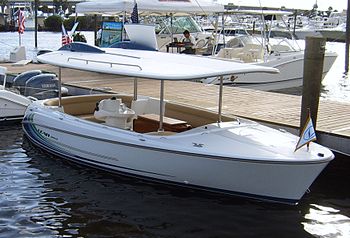 The size of the battery bank determines the range of the boat under electric power alone. The speed that the boat is motored at also affects this - a lower speed can make a big difference to the energy required to move a hull. Other factors that affect range include sea-state, windage and any charge that can be reclaimed while under way, for example by solar panels in full sun. A wind tubine in a good following wind will help, and motor-sailing in any wind could do so even more. 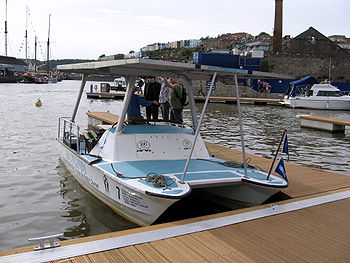 To make the boat usable and maneuverable, a simple-to-operate forward/stop/backwards speed controller is needed. This must be efficient—i.e. it must not get hot and waste energy at any speed—and it must be able to stand the full current that could conceivably flow under any full-load condition. One of the most common types of speed controllers uses Pulse-width modulation (PWM). PWM controllers send high frequency pulses of power to the motor(s). As more power is needed the pulses become longer in duration.

A wide variety of electric motor technologies are in use. Traditional field-wound DC motors were and still are used. Today many boats use lightweight permanent magnet DC motors. The advantage of both types is that while the speed can be controlled electronically, this is not a requirement. Some boats use AC motors or permanent magnet brushless motors. The advantages of these are the lack of commutators which can wear out or fail and the often lower currents allowing thinner cables; the disadvantages are the total reliance on the required electronic controllers and the usually high voltages which require a high standard of insulation.

Traditional boats use an inboard motor powering a propeller though a propeller shaft complete with bearings and seals. Often a gear reduction is incorporated in order to be able to use a larger more efficient propeller. This can be a traditional gear box, coaxial planetary gears or a transmission with belts or chains. Because of the inevitable loss associated with gearing, many drives eliminate it by using slow high-torque motors. The electric motor can be encapsulated into a pod with the propeller and fixed outside the hull (saildrive) or on an outboard fixture (outboard motor).

There are as many types of electric boat as there are boats with any other method of propulsion, but some types are significant for various reasons. 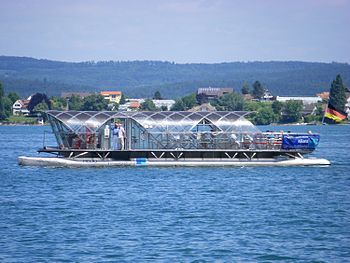 RA66 Helio is a solar-powered 20m-catamaran cruising on the Untersee, a part of Lake Constance. It is based in Radolfzell, Germany.

All the component parts of any boat have to be manufactured and will eventually have to be disposed of. Some pollution and use of other energy sources are inevitable during these stages of the boat's life and electric boats are no exception. The benefits to the global environment that are achieved by the use of electric propulsion are manifested during the working life of the boat, which can be many years. These benefits are also most directly felt in the sensitive and very beautiful environments in which such a boat is used.

The May 2010 edition of Classic Boat magazine carried a pro and con article entitled Electric debate.[12] Jamie Campbell argued against electric boating on four main counts, which were rebuffed by Kevin Desmond and Ian Rutter of the Electric Boat Association. Jamie Campbell asserted that electric propulsion can no more be justified afloat than a Seagull outboard motor, proposing wooden sailing boats and rowing dinghies as "by far the most environmentally sensitive and renewable options for recreational boating".

Electricity production
Campbell asserts that the lack of pollution from an electric boat "reeks of nimbyism" as "the discharge is all in someone else's back yard" and that the provision of re-charging points may involve digging up miles of habitat. Desmond responds that while there is no doubt that rechargeable batteries derive their energy from power stations (when not charged on board by solar and wind generation), noisier internal-combustion-engined boats obtain their fuel from even further away and that, once installed a power cable is less environmentally disruptive than a petrol station. Rutter notes that electric boats tend to recharge overnight, using 'base load'.
Efficiency
While there are losses in the charge/discharge cycle and in the conversion of electricity to motive power, Rutter points out that most electric boats need only about 1.5 kW or 2 hp to cruise at 5 mph, a common maximum river speed and that a 30 hp petrol or diesel engine producing only 2 hp is considerably more inefficient. While Campbell refers to heavy batteries requiring a "load-bearing hull" and "cranky, even unseaworthy vessels", Desmond points out that electric boaters tend to prefer efficient, low-wash hull forms that are more friendly to river banks.
Pollution
Campbell discusses the pollution that "traditional" batteries put into the water when a boat sinks, but Desmond says that electric boats are no more liable to sinking than other types and lists the leakage of fuel, engine oil and coolant additives as inevitable when an internal-combustion-engined boat sinks. Rutter points to the "very nasty cocktail of pollutants" that come out of a diesel wet exhaust in normal use.
Battery manufacture
Campbell mentions "all manner of noxious chemicals ... involved in battery manufacture", but Rutter describes them as being "lead and sulphuric acid with a few extra trace metals in a modest plastic box" with a potential lifetime of 10–12 years. Desmond says that the US has a 98% recycling rate for lead acid batteries and that the battery and lead-smelting industries observe some of the tightest pollution control standards in the world.

The article mentions 25% and 30% discounts being offered to electric boaters by the UK Environment Agency and the Broads Authority and that battery powered vehicles have 3⁄5 the carbon footprint of their petrol equivalents. It is claimed that a typical recharge after a day's cruising costs £1.50, without the use of solar or wind power.[12]

In 2010, the Tûranor PlanetSolar, a 30 metre long, 15.2 metre wide catamaran yacht powered by 470 square metres of solar panels, was unveiled. It is set to circumnavigate the Earth and is so far the largest solar-powered boat ever built.

The Monaco yacht company Wally has announced a "gigayacht" designed for billionaires torn between buying a mansion and a superyacht.[16] The Why 58 x 38 is designed to have an autonomous cruising range of 12,000 miles at 12 knots by means of 900m2 of solar panels which generate 150 kW to assist the diesel-electric motors and optional Skysails.[17]