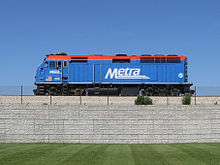 Diesel-electric transmission or diesel-electric powertrain is used by a number of vehicle and ship types for providing locomotion.

Before diesel engines came into widespread use, a similar system, using a petrol (gasoline) engine and called petrol-electric or gas-electric, was sometimes used.

This kind of power transmission is used on railways by diesel electric locomotives and diesel electric multiple units as only electric motors are able to supply full torque at 0 RPM. Diesel-electric systems are also used in submarines and surface ships and some land vehicles.

In some high-efficiency applications, electrical energy may be stored in rechargeable batteries, in which case these vehicles can be considered as a class of hybrid electric vehicle. 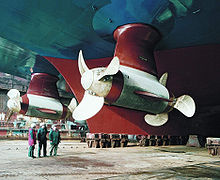 Some modern ships, including cruise ships and icebreakers, use electric motors in pods called azimuth thrusters underneath to allow for 360° rotation, making the ships far more manoeuvrable.

Gas turbines are also used for electrical power generation and some ships use a combination: the Queen Mary 2 has a set of diesel engines in the bottom of the ship plus two gas turbines mounted near the main funnel; all are used for generating electrical power, including that used to drive the propellers.

Early submarines used a direct mechanical connection between the engine and propeller, switching between diesel engines for surface running, and electric motors for submerged propulsion.

True diesel-electric transmissions for submarines were first proposed by the United States Navy's Bureau of Engineering in 1928; instead of driving the propeller directly while running on the surface, the submarine's diesel would instead drive a generator which could either charge the submarine's batteries or drive the electric motor. This meant that motor speed was independent of the diesel engine's speed, and the diesel could run at an optimum and non-critical speed, while one or more of the diesel engines could be shut down for maintenance while the submarine continued to run using battery power. The concept was pioneered in 1929 in the S-class submarines S-3, S-6, and S-7 to test the concept. No other navy adopted the system before 1945, apart from the British Royal Navy's U-class submarines, though some submarines of the Imperial Japanese Navy used separate diesel generators for low speed running.[1]

In a diesel-electric direct drive arrangement, the (usually single) propeller is driven directly by an electric motor, while two or more diesel-generators provide electric energy for charging the batteries and/or driving the electric motor. This mechanically isolates the noisy engine compartment from the outer pressure hull and reduces the acoustic signature of the submarine. Additionally some nuclear submarines also decouple their reactor room this way, having turbo-electric propulsion driven by reactor steam. Many submarines with diesel and electrical propulsion are mistakenly referred to as "diesel-electric" when they in fact have separately coupled diesel and electric engines.

In the 1920s, diesel-electric technology first saw limited use in switchers (or shunters), locomotives used for moving trains around in railroad yards and assembling and disassembling them. One of the first companies to offer "Oil-Electric" locomotives was the American Locomotive Company (ALCO). The ALCO HH series of diesel-electric switcher entered series production in 1931. In the 1930s, the system was adapted for streamliners, the fastest trains of their day. Diesel-electric powerplants became popular because they greatly simplified the way motive power was transmitted to the wheels and because they were both more efficient and had greatly reduced maintenance requirements. Direct-drive transmissions can become very complex, considering that a typical locomotive has four or more axles. Additionally, a direct-drive diesel locomotive would require an impractical number of gears to keep the engine within its powerband; coupling the diesel to a generator eliminates this problem. An alternative is to use a torque converter or fluid coupling in a direct drive system to replace the gearbox. Hydraulic transmissions are claimed to be somewhat more efficient than diesel-electric technology.[1]

Road and other land vehicles 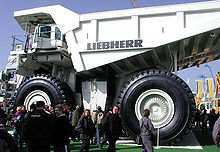 In the automobile industry, diesel engines in combination with electric transmissions and battery power are being developed for future vehicle drive systems. Partnership for a New Generation of Vehicles was a cooperative research program between the U.S. government and the Detroit three Automobile manufacturer DaimlerChrysler, Ford Motor Company, and General Motors Corporation that developed diesel hybrid cars.

Diesel-electric propulsion was tried on some military vehicles, such as tanks. Ferdinand Porsche was the main developer of such drive-trains for military vehicles in World War II Nazi Germany, and created the Elefant tank destroyer and the prototypes of the never-produced, 200-ton class Maus super-heavy tank. 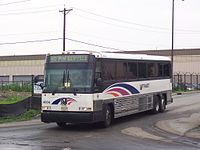 Diesel electric based buses have also been produced, including hybrid systems able to run on and store electrical power in batteries. The two main providers of hybrid systems for diesel-electric transit buses include Allison Transmission and BAE Systems. New Flyer Industries, Gillig Corporation, and North American Bus Industries are major customers for the Allison EP hybrid systems, while Orion Bus Industries is a major customer for the BAE HybriDrive system. Mercedes-Benz makes their own diesel-electric drive system, which is used in their Citaro.