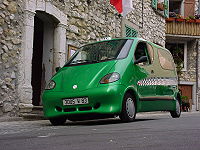 A compressed air car is a car that uses a motor powered by compressed air. The car can be powered solely by air, or combined (as in a hybrid electric vehicle) with gasoline, diesel, ethanol, or an electric plant with regenerative braking.

There have been prototype cars since the 1920s, and compressed air has been used in torpedo propulsion as well.

In contrast to hydrogen's issues of damage and danger involved in high-impact crashes, air, on its own, is non-flammable. It was reported on Seven Network's Beyond Tomorrow that on its own,[clarification needed] carbon-fiber is brittle and can split under sufficient stress, but creates no shrapnel when it does so. Carbon-fiber tanks safely hold air at a pressure somewhere around 4500 psi, making them comparable to steel tanks. The cars are designed to be filled up at a high-pressure pump.

In order to increase energy density, some systems may use gases that can be liquified or solidified. "CO2 offers far greater compressibility than air when it transitions from gaseous to supercritical form." [2]

Compressed air cars are emission-free at the exhaust. Since a compressed air car's source of energy is usually electricity, its total environmental impact depends on how clean the source of this electricity is. Different regions can have very different sources of power, ranging from high-emission power sources such as coal to zero-emission power sources such as wind. A given region can also update its electrical power sources over time, thereby improving or worsening total emissions.

However a study showed that even with very optimistic assumptions, air storage of energy is less efficient than chemical (battery) storage.[3]

The principal advantages of an air powered vehicle are:

Safety claims for light weight vehicle air tanks in severe collisions have not been verified. North American crash testing has not yet been conducted, and skeptics question the ability of an ultralight vehicle assembled with adhesives to produce acceptable crash safety results. Shiva Vencat, vice president of MDI and CEO of Zero Pollution Motors, claims the vehicle would pass crash testing and meet U.S. safety standards. He insists that the millions of dollars invested in the AirCar would not be in vain. To date, there has never been a lightweight, 100-plus mpg car which passed North American crash testing. Technological advances may soon make this possible, but the AirCar has yet to prove itself, and collision safety questions remain.[13]

The key to achieving an acceptable range with an air car is reducing the power required to drive the car, so far as is practical. This pushes the design towards minimizing weight.

According to a report by the U.S. Government's National Highway Traffic Safety Administration, among 10 different classes of passenger vehicles, "very small cars" have the highest fatality rate per mile driven. For instance, a person driving 12,000 miles per year for 55 years would have a 1% chance of being involved in a fatal accident. This is twice the fatality rate of the safest vehicle class, a "large car". According to the data in this report, the number of fatal crashes per mile is only weakly correlated with the vehicle weight, having a correlation coefficient of just (-0.45). A stronger correlation is seen with the vehicle size within its class; for example, "large" cars, pickups and SUVs, have lower fatality rates than "small" cars, pickups and SUVs. This is the case in 7 of the 10 classes, with the exception of mid-size vehicles, where minivans and mid-size cars are among the safest classes, while mid-size SUVs are the second most fatal after very small cars. Even though heavier vehicles sometimes are statistically safer, it is not necessarily the extra weight that causes them to be safer. The NHTSA report states: "Heavier vehicles have historically done a better job cushioning their occupants in crashes. Their longer hoods and extra space in the occupant compartment provide an opportunity for a more gradual deceleration of the vehicle, and of the occupant within the vehicle... While it is conceivable that light vehicles could be built with similarly long hoods and mild deceleration pulses, it would probably require major changes in materials and design and/or taking weight out of their engines, accessories, etc." [14]

Air cars may use low rolling resistance tires, which typically offer less grip than normal tires.[15][16] In addition, the weight (and price) of safety systems such as airbags, ABS and ESC may discourage manufacturers from including them.

Various companies are investing in the research, development and deployment of Compressed air cars. Overoptimistic reports of impending production date back to at least May 1999. For instance, the MDI Air Car made its public debut in South Africa in 2002,[17] and was predicted to be in production "within six months" in January 2004.[18] As of January 2009, the air car never went into production in South Africa. Most of the cars under development also rely on using similar technology to Low-energy vehicles in order to increase the range and performance of their cars.

MDI has proposed a range of vehicles made up of AirPod, OneFlowAir, CityFlowAir, MiniFlowAir and MultiFlowAir.[20] One of the main innovations of this company is its implementation of its "active chamber", which is a compartment which heats the air (through the use of a fuel) in order to double the energy output.[21] This 'innovation' was first used in torpedoes in 1904.

As of January 2009[update] Tata Motors of India had planned to launch a car with an MDI compressed air engine in 2011.[22] In December 2009 Tata's vice president of engineering systems confirmed that the limited range and low engine temperatures were causing problems.[23] Meanwhile any related articles or connections to MDI have been deleted from the website of Tata Motors, including in the archive.

Air Car Factories SA is proposing to develop and build a compressed air engine.[24] This Spanish based company was founded by Miguel Celades. Currently there is a bitter dispute between Motor Development International, another firm called Luis which developed compressed-air vehicles, and Mr. Celades, who was once associated with that firm.[25][26]

The Energine Corporation was a South Korean company that claimed to deliver fully assembled cars running on a hybrid compressed air and electric engine. These cars are more precisely named pneumatic-hybrid electric vehicles.[27] Engineers from this company made, starting from a Daewoo Matiz, a prototype of a hybrid electric/compressed-air engine (Pne-PHEV, pneumatic plug-in hybrid electric vehicle[citation needed]). The compressed-air engine is used to activate an alternator, which extends the autonomous operating capacity of the car.

The CEO is the first compressed air car promoter to be arrested for fraud.[28]

A similar (but only for braking energy recovery) concept using a pneumatic accumulator in a largely hydraulic system has been developed by U.S. government research laboratories and industry, and is now being introduced for certain heavy vehicle applications such as refuse trucks.[29]

K'Airmobiles vehicles were intended to be commercialized from a project developed in France in 2006-2007 by a small group of researchers. However, the project has not been able to gather the necessary funds.

People should note that, meantime, the team has recognized the physical impossibility to use on-board stored compressed air due to its poor energy capacity and the thermal losses resulting from the expansion of the gas.

These days, using the patent pending 'K'Air Fluid Generator', converted to work as a compressed-gas motor, the project should be launched in 2010, thanks to a North American group of investors, but for the purpose of developing first a green energy power system.

Engineair is an Australian company which manufactures small industrial vehicles using an air engine of its own design.[30]