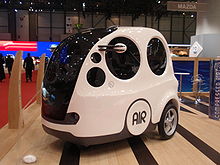 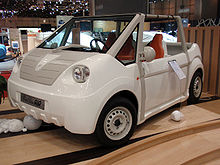 MDI proposes a range of vehicles developed on an identical concept. [4]

The Air Car has been in development for twenty years. The design, particularly the engine, has undergone several radical changes.

In the original Nègre air engine, one piston compresses air from the atmosphere to mix with the stored compressed air (which will cool drastically as it expands). This mixture drives the second piston, providing the actual engine power. Nègre's engine works with constant torque, and the only way to change the torque to the wheels is to use a continuously variable transmission, losing some efficiency. Armando Regusci's version of the air engine has several advantages over the original Nègre design.[citation needed]

In Regusci's version, the engine is connected directly to the wheel, and delivers variable torque from zero to the maximum, enhancing efficiency. When the vehicle is stopped, Guy Nègre's engine must continue to run, losing energy, while the Regusci's version need not. In 2001-2004 MDI switched to a design similar to that described in Regusci's patents, which date back to 1990.[citation needed]

Zero Pollution Motors and MDI are among the teams who have committed to participation in the Progressive Insurance Automotive X Prize competition.[5] As of September 2009 they do not appear on the list of registered teams.[6] As of October 2009 it appears they did not qualify for the next stage in the competition.[7]

2000-2009: Production in France was claimed to be starting in late 2000,[8] and at frequent intervals, in several countries, thereafter.

2003: The Eolo Car is a version of the Air Car that was to be manufactured in Italy in 2003, but failed to get into production.

2009-2011: According to MDI, were some fabrication and distribution licenses signed with companies in various countries including France, Germany, Spain, Portugal, Italy, New Zealand, Israel and South Africa.[citation needed] Zero Pollution Motors would like to make MDI vehicles in the United States.[9] MDI Andina S.A wanted to sell the car in Colombia, Peru, Ecuador and Panama.[citation needed] The last one was CATECAR S.A in Switzerland which was about to start the first assembly line in the Bernese Jura , but the project is on hold (as so many others before) due to legal problems with MDI.[10] MDI had also reached an agreement with Tata Motors, which were to produce and sell OneCAT cars in India. Tata does not work on compressed air cars anymore, and every link to MDI has been deleted from their website, except in the archives.[11]

IT MDI-Energy Pty Ltd in Australasia.[12]