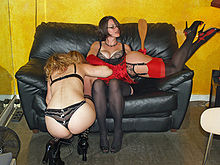 Many cultures describe pain as an aphrodisiac. For example, the Kama Sutra, in particular, goes into specific detail on how to properly strike a partner during sex.[3] 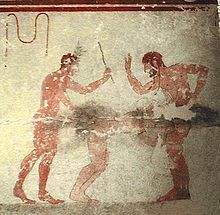 A spanking may be carried out with the use of a bare hand, or with any of a variety of implements, including a paddle, strap, hairbrush or belt.[2] Other popular tools are canes, riding crops, whips, switches, birches, sneakers, rolled-up newspapers, rulers or martinet. (see Category:Spanking implements). 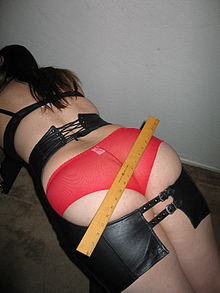 A spank skirt (also called a spanking skirt) has an additional opening in back designed to expose the buttocks. While the name spank skirt suggests that the wearer could be spanked "bare bottom" without removing or repositioning the skirt, this item may be worn for reasons other than spanking (for instance, exposure).[citation needed]

Considered fetish wear, spank skirts are typically tight-fitting and made of fetishistic materials (such as leather, PVC or latex).

Regardless of the gender of the wearer, spank skirts are usually considered female attire. The male gender role equivalent might be motorcycle chaps.

Other garments associated with spanking as well as humiliation are ruffled or rhumba panties, women's panties with rows of ruffles on the rear panel or outside.[citation needed] 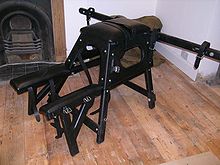 A spanking bench or spanking horse is a piece of furniture used to position a spankee on, with or without restraints. They come in many sizes and styles, the most popular of which is similar to a sawhorse with a padded top and rings for restraints.[12]

... Miss Lambercier... exerted a mother's authority, even to inflicting on us... the punishment of infants... Who would believe this childish discipline, received at eight years old, from the hands of a woman of thirty, should influence my propensities, my desires, my passions, for the rest of my life... To fall at the feet of an imperious mistress, obey her mandates, or implore pardon, were for me the most exquisite enjoyments, and the more my blood was inflamed by the efforts of a lively imagination the more I acquired the appearance of a whining lover."[15]

In some cultures, the spanking of women, by the male head of the family or by the husband (sometimes called domestic discipline) has been and sometimes continues to be a common and approved custom. In those cultures and in those times it was the belief that the husband, as head of the family, had a right and even the duty to discipline his wife and children when he saw fit, and manuals were available to instruct the husband how to discipline his household. In most western countries, this practice has come to be regarded as unlawful and socially unacceptable wife-beating, domestic violence or abuse. Routine corporal punishment of women by their husbands, however, does still exist in some parts of the developing world,[17][18][19] and still occurs in isolated cases in western countries.

Spanking can be administered in a number of spanking positions. The choice of position takes into account the spankee's (bottom) comfort in the position for long periods of time, the spanker's (top) ability to swing at the spankee at a comfortable, natural angle, complete access to the spankee's buttocks, the spanker's control of the spankee's position and ability to readjust as necessary, safety, and the amount of strength the top is able to generate from such a position. Positions can also be chosen specifically for added effects such as increased humiliation, elevation and suspension.