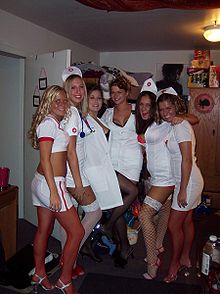 The attraction to nurses and their uniforms is a common example of a medical fetish.

Medical fetishism refers to a collection of sexual fetishes for objects, practices, environments, and situations of a medical or clinical nature.

In sexual role-play a hospital or medical scene involves the sex partners assuming the roles of doctors, nurses and patients to act out specific or general medical fetishes. Medical fantasy is a genre in pornography.

Intimate examinations are eroticized by some people as part of medical fetishism, and as such are a common service offered by professional dominants.

An intimate examination can form part of a scene in medical play where the nurse or doctor inflicts one or more embarrassing and humiliating quasi-medical procedures on the patient. Often frozen or heated objects are introduced to the patient's body to simulate the uncomfortable sensations that can occur during a real examination. Examinations may include an examination and intrusion of the anus, as well as handling and twisting of the penis, testicles, and nipples. Quite often, strap on play is also incorporated, as this can heighten the intimacy, and also the sensations of the patient. This may be a prelude to masturbation or administration of an enema. Before examination, the patient can be placed in physical restraints and gagged, and wear some form of embarrassing clothing.

Anesthesia fetishism is a sexual fetish for anesthesia. This may include the sexual attraction to the equipment, processes, substances, effects, environments or situations. Sexual arousal from the desire to administer anesthesia, or the sexual desire for oneself to be anaesthetized are two forms in which an individual may exist as an arbiter of the fetish. Older-style anesthesia masks of black rubber, still in occasional use today, are one of the more common elements fetishized, and have earned the nickname Black Beauty by many fetishists.

Temperature taking fetish is a sexual fetish for oral thermometers and rectal thermometers. This may include the sexual attraction to the equipment, processes, environments or scenarios/situations. Sexual arousal from the desire to take another's temperature or have one's temperature taken is primarily what surrounds the fetish. While rectal temperature taking is more prominent, there is also an interest in oral temperature taking. With respect to rectal temperature taking, the scenario for the purist usually involves the use of the traditional mercury-filled with stubby bulb, yellow-banded, red-tipped thermometer. Seeing it lying on the table, ready to be used, next to a jar of Vaseline of a tube of K-Y jelly . . . is the beginning of the arousal. A separate or additional scenario of having the underwear lowered, the buttocks separated to inspect the anus, the lubrication of the anus (with a finger in sex play but traditionally just slightly with the lubricated tip of the thermometer prior to insertion in medical use), and the insertion of the thermometer (again, slowly in sex play, teasing the anus before slowly inserting it into the rectum). Taking the actual temperature and recording the reading is also a critical aspect – while the thermometer is inserted, the buttocks and upper thighs may be massaged, at a minimum, and the thermometer is “adjusted” by rotating it between the fingers and/or moving it in and out. A slow removal of the thermometer intensifies the removal process after four minutes. After the temperature has been noted, and the thermometer cleaned and put back in its case (or, in some cases having to be used again to verify a questionable reading) having the buttocks spread and being wiped of the lubricant is the concluding act of stimulation and submission in the scenario. Lying on the bed, exposed – with a thermometer inserted – is also erotic in a submissive and/or exhibitionist way.

The feeling of the rectal thermometer [being] inserted is a separate and different sensation from the insertion of a finger, a medical instrument (like an enema nozzle or a scope) or a sex toy. These, while stimulating the anus, also cause arousal due to their size and depth.

Anesthesia fetish is considered edgeplay when realised outside the boundaries of fantasy, and may result in various degrees of harm, or death. Fantasies are elaborated by the viewing of images and reading of stories of anesthetic inductions. Edgeplay may involve obtaining and scening with various anesthesia-related paraphernalia - usually anesthesia masks for breathplay, the acquisition of anesthetics for anesthetizing others or being anesthetized oneself, and the occupation of a medical setting or environment for the same practice.

Some anesthesia fetishists who seek to be anesthetized may feign or induce medical conditions in an attempt to obtain general anesthesia from medical personnel. This is considered safer than playing with anesthetic agents outside of a medical setting, but may nevertheless be an abuse of all concerned.

The Internet has enabled people with this relatively rare paraphilia to discuss the subject and exchange anesthesia-related multimedia.