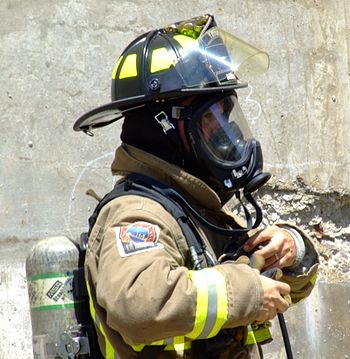 A self contained breathing apparatus, or SCBA, sometimes referred to as a Compressed Air Breathing Apparatus (CABA), air pack, or simply Breathing Apparatus (BA) is a device worn by rescue workers, firefighters, and others to provide breathable air in an IDLH (Immediate Danger to Life and Health) Atmosphere. When not used underwater, they are sometimes called industrial breathing sets. The term "self-contained" means that the breathing set is not dependent on a remote supply (e.g., through a long hose). If designed for use under water, it is called SCUBA (self-contained underwater breathing apparatus).

An SCBA typically has three main components: a high-pressure tank (e.g., 2200 psi to 4500 psi), a pressure regulator, and an inhalation connection (mouthpiece, mouth mask or face mask), connected together and mounted to a carrying frame.

There are two kinds of SCBA: open circuit and closed circuit.

The closed-circuit type filters, supplements, and recirculates exhaled gas: see rebreather for more information. It is used when a longer-duration supply of breathing gas is needed, such as in mine rescue and in long tunnels, and going through passages too narrow for a big open-circuit air cylinder. Before open-circuit SCBA's were developed, most industrial breathing sets were rebreathers, such as the Siebe Gorman Proto, Siebe Gorman Savox, or Siebe Gorman Salvus. An example of modern rebreather SCBAs would be the SEFA. Rebreathers used underwater have the advantage of not releasing tell-tale bubbles, making it more difficult to detect divers involved in covert operations (see frogman).

A person wearing an MSA Brand breathing mask with a Nomex hood on. This face piece attaches with a regulator to form a full SCBA. 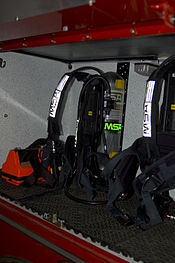 SCBA packs carried on a rack in a firetruck

Open-circuit industrial breathing sets are filled with filtered, compressed air, rather than pure oxygen. Typical open-circuit systems have two regulators; a first stage to reduce the pressure of air to allow it to be carried to the mask, and a second stage regulator to reduce it even further to a level just above standard atmospheric pressure. This air is then fed to the mask via either a demand valve (activating only on inhalation) or a continuous positive pressure valve (providing constant airflow to the mask).

An open-circuit rescue or firefighter SCBA has a fullface mask, regulator, air cylinder, cylinder pressure gauge, and a harness with adjustable shoulder straps and waist belt which lets it be worn on the back. The air cylinder usually comes in one of three standard sizes: 4 liter, 6 liter, or 6.8 liter. The duration of the cylinder can be calculated to Size of cylinder X Pressure / by 40 and then less 10 minutes because of a safety margin. so a 6 liter cylinder, of 300bar, is 6 X 300 / 40 - 10 = 35minutes working duration The relative fitness, and especially the level of exertion of the wearer, often results in variations of the actual usable time that the SCBA can provide air, often reducing the working time by 25% to 50%. 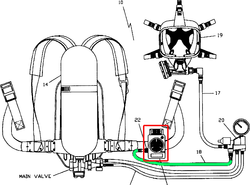 Air cylinders are made of aluminium, steel, or of a composite construction (usually carbon-fiber wrapped.) The composite cylinders are the lightest in weight and are therefore preferred by fire departments (UK: fire brigades), but they also have the shortest lifespan and must be taken out of service after 15 years. Air cylinders must be hydrostatically tested every 5 years for composite cylinders, and every 5 years for metal cylinders. During extended operations, empty air cylinders can be quickly replaced with fresh ones and then refilled from larger tanks in a cascade storage system or from an air compressor brought to the scene.

The fullface masks of breathing apparatus designed for use out of water are sometimes designed in a way that makes them unsuitable for scuba diving, although some may allow emergency very shallow submersion:

The mask may have a big fullface window, or small eye windows.

The mask may have a small orinasal breathing mask inside, reducing breathing deadspace.

The mask may incorporate a two-way radio communicator.

Some old industrial rebreathers (e.g. the Siebe Gorman Proto) had a mouthpiece and attached noseclip instead.

There are two major application areas for SCBA, fire fighting, and industrial use.

For fire fighting, the design emphasis is on heat and flame resistance above cost. SCBA designed for fire fighting tend to be expensive because of the exotic materials used to provide the flame resistance and to a lesser extent, to reduce the weight penalty on the fire fighter. In addition, modern firefighting SCBAs incorporate a PASS device (Personal Alert Safety System) or an ADSU (Automatic Distress Signal Unit) into their design. These units emit distinctive high pitched alarm tones to help locate firefighters in distress by automatically activating if movement is not sensed for a certain length of time (typically between 15 and 30 seconds), also allowing for manual activation should the need arise. In firefighting use, the layout of his breathing set should not interfere with ability to carry a rescued person over the firefighter's shoulders.

The other major application is for industrial users of various types. Historically, mining was an important area, and in Europe this is still reflected by limitations on use in the construction of SCBAs of metals that can cause sparks. Other important users are petrochemical, chemical, and nuclear industries. The design emphasis for industrial users depends on the precise application and extends from the bottom end which is cost critical, to the most severe environments where the SCBA is one part of an integrated protective environment which includes gas tight suits for whole body protection and ease of decontamination. Industrial users will often be supplied with air via an air line, and only carry compressed air for escape or decontamination purposes.

In the United States and Canada, SCBAs used in firefighting must meet guidelines established by the National Fire Protection Association, NFPA Standard 1981. If an SCBA is labeled as "1981 NFPA compliant", it is designed for firefighting. The current version of the standard was published in 2007. These standards are revised every five years. Similarly, the National Institute for Occupational Safety and Health (NIOSH) has a certification program for SCBA that are intended to be used in chemical, biological, radiological, and nuclear (CBRN) environments. See NIOSH Approved SCBAs.

Any SCBA supplied for use in Europe must comply with the requirements of the Personal Protective Equipment Directive (89/686/EEC). In practice this usually means that the SCBA must comply with the requirements of the European Standard EN 137 : 2006. This includes detailed requirements for the performance of the SCBA, the marking required, and the information to be provided to the user. Two classes of SCBA are recognised, Type 1 for industrial use and Type 2 for fire fighting. Any SCBA conforming to this standard will have been verified to reliably operate and protect the user from -30°C to +60°C under a wide range of severe simulated operational conditions.

The pressure gauge's indicated gas pressure changes with ambient temperature. As temperature decreases, the pressure inside the cylinder decreases. The relationship between the temperature and the pressure of a gas is estimated by using the formula PV = nRT.[1] What is particularly important to understand from the formula is that the temperature is in kelvins, not degrees Fahrenheit. Consider the freezing point of water at 32 degrees Fahrenheit (0 degrees Celsius, 273.15 degree Kelvin) and compare it to 96°F (35.6°C or 308.71°K; normal human body temperature is 37°C). While 96 is arithmetically three times 32, the difference in temperature from a scientific point of view is not threefold. Instead of comparing 32°F to 96°F, temperatures of 273.15°K and 308.71°K should be compared.[2] The actual scientifically valid change in temperature from 32°F to 96°F is by a factor of 1.13 (308.71°K/273.15°K), not 3. If an air cylinder is pressurized to 4,500 psi at 96°F and later the temperature drops to 32°F, the pressure gauge will indicate 4,000 psi (4,500/1.13). Stated differently, a drop in temperature of 10 degrees Fahrenheit causes a pressure decrease of about 82 psi. Failure to accurately account for the effect of temperature on pressure readings can result in underfilled air bottles, which in turn could lead to a firefighter running out of air prematurely.

Among the leading manufacturers of SCBA for the USA fire service are:

Among the leading manufacturers of SCBA for the European fire service and industrial safety: 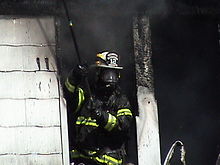 In Australia different firefighting agencies refer to SCBA by different acronyms in general terms. For example:

All these initials mean the same type of open-circuit equipment.

An SCBA unit may also be referred to as a "Scott Pack", deriving the name of the Scott company that manufactures many SCBAs.