Mine rescue is the very specialized job of rescuing miners and others who have become trapped or injured underground in mines because of mining accidents and disasters such as explosions caused by firedamp, roof falls or floods. 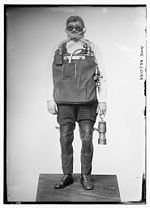 Mining laws in developed countries require trained, properly-equipped mine rescue personnel to be available at all mining operations at both surface and underground mining operations. These personnel make up what is known as a "Mine rescue team". Mine rescue teams must know the procedures used to rescue miners trapped by various hazards, including fires, explosions, cave-ins, toxic gas, smoke inhalation, and water entering the mine. As mine rescue is particularly dangerous work, rescue crews are usually made up of volunteers who risk their own lives to save their fellow workers. Most mine rescue teams are composed of miners who know the particular mine, and are familiar with the various sorts of mine machinery they may encounter during the rescue, the layout of workings and geological conditions and working practices. Local and state governments may also have teams on call ready to respond to mine accidents.

Mine rescue teams are trained in first aid and the use of a wide variety of tools, and, in the case of underground rescues, the operation of SCBA breathing sets (to work in passages filled with mine gases such as firedamp, afterdamp, chokedamp, and sometimes shallow submersion).

Mine rescue men have been using breathing sets almost since they were invented. Generally only the rescuers use breathing sets, but in one case where an advancing coalmine passage broke into a surface hollow full of deep liquid peat, flooding part of the mine (7–9 September 1950, Knockshinnoch Castle Colliery, near New Cumnock, Ayrshire, Scotland; 13 died, [1]), 115 trapped miners were equipped with Siebe Gorman Salvuses (87 sets in all, mainly from fire stations) so they could be led out through gas-filled workings.

British mine rescue men for a long time used the Siebe Gorman Proto, which is often seen in old group photographs. From about 1989 to 2002 onwards they used the SEFA. In recent years, popular models have been those manufactured by Draeger rebreather and Biomarine. Narrow spaces in mines are often too tight a squeeze for bulky open circuit set cylinders.

In Britain, mine rescue teams are sometimes called to investigate holes in the ground that have appeared because of land surface subsidence into old mineshafts and mine workings.

In 2010 the world's first all female mine rescue team was formed at the Colorado School of Mines.