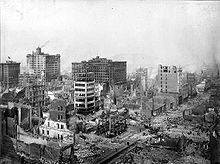 Ruins from the 1906 San Francisco earthquake, remembered as one of the worst natural disasters in United States history

A disaster is a natural or man-made hazard that has come to fruition, resulting in an event of substantial extent causing significant physical damage or destruction, loss of life, or drastic change to the environment. A disaster can be ostensively defined as any tragic event with great loss stemming from events such as earthquakes, floods, catastrophic accidents, fires, or explosions.

In contemporary academia, disasters are seen as the consequence of inappropriately managed risk. These risks are the product of hazards and vulnerability. Hazards that strike in areas with low vulnerability are not considered a disaster, as is the case in uninhabited regions.[1]

The word disaster is derived from Middle French désastre and that from Old Italian disastro, which in turn comes from the Greek pejorative prefix δυσ-, (dus-) "bad"[4] + ἀστήρ (aster), "star".[5] The root of the word disaster ("bad star" in Greek) comes from an astrological theme in which the ancients used to refer to the destruction or deconstruction of a star as a disaster.

Researchers have been studying disasters for more than a century, and for more than forty years disaster research has been institutionalize the University of Delaware's Disaster Research Center. The studies reflect a common opinion when they argue that all disasters can be seen as being human-made, their reasoning being that human actions before the strike of the hazard can prevent it developing into a disaster. All disasters are hence the result of human failure to introduce appropriate disaster management measures.[6] Hazards are routinely divided into natural or human-made, although complex disasters, where there is no single root cause, are more common in developing countries. A specific disaster may spawn a secondary disaster that increases the impact. A classic example is an earthquake that causes a tsunami, resulting in coastal flooding.

A natural disaster is a consequence when a natural calamity affects humans and/or the built environment. Human vulnerability, and often a lack of appropriate emergency management, leads to financial, environmental, or human impact. The resulting loss depends on the capacity of the population to support or resist the disaster: their resilience. This understanding is concentrated in the formulation: "disasters occur when hazards meet vulnerability". A natural hazard will hence never result in a natural disaster in areas without vulnerability.

Various disasters like earthquake, landslides, volcanic eruptions, flood and cyclones are natural hazards that kill thousands of people and destroy billions of dollars of habitat and property each year. The rapid growth of the world's population and its increased concentration often in hazardous environment has escalated both the frequency and severity of natural disasters. With the tropical climate and unstable land forms, coupled with deforestation, unplanned growth proliferation non-engineered constructions which make the disaster-prone areas more vulnerable, tardy communication, poor or no budgetary allocation for disaster prevention, developing countries suffer more or less chronically by natural disasters. Asia tops the list of casualties due to natural disasters.

Among various natural hazards, earthquakes, landslides, floods and cyclones are the major disasters adversely affecting very large areas and population in the Indian sub-continent. These natural disasters are of (i) geophysical origin such as earthquakes, volcanic eruptions, land slides and (ii) climatic origin such as drought, flood, cyclone, locust, forest fire. Though it may not be possible to control nature and to stop the development of natural phenomena but the efforts could be made to avoid disasters and alleviate their effects on human lives, infrastructure and property. Rising frequency, amplitude and number of natural disasters and attendant problem coupled with loss of human lives prompted the General Assembly of the United Nations to proclaim 1990s as the International Decade for Natural Disaster Reduction (IDNDR) through a resolution 44/236 of December 22, 1989 to focus on all issues related to natural disaster reduction. In spite of IDNDR, there had been a string of major disaster throughout the decade. Nevertheless, by establishing the rich disaster management related traditions and by spreading public awareness the IDNDR provided required stimulus for disaster reduction. It is almost impossible to prevent the occurrence of natural disasters and their damages.

Disaster management, on the other hand involves:

Disaster reduction is a systematic work which involves with different regions, different professions and different scientific fields, and has become an important measure for human and nature sustainable development. 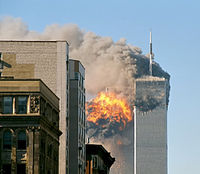 Airplane crashes and terrorist attacks are examples of man-made disasters: they cause pollution, kill people, and damage property.

The local communities at the time of disaster or before the disaster make groups for helping the people from suffering during the disaster. These groups include First Aid group, Health group, Food and Welfare group, Federal Emergency Management Agency (FEMA) etc. They all are well trained by some local community members. All the groups are sent for helping any other local community that is suffering from a disaster. They also ask people to move from the area affected from disaster to some other safe regions. They are given shelter and every possible facilities by those local management communities. Some agencies also provide maps of potential disaster sites. Today, Government is also making effort to provide good facilities during the disaster. In Indian rural areas, the community (group of families) are choosing a leader and developing their Disaster management skills to protect themselves and other local communities as well.