Hurricane preparedness encompasses the actions and planning taken before a tropical cyclone strikes to mitigate damage and injury from the storm. Preparedness may involve preparations made by individuals as well as centralized efforts by governments or other organizations.

Recent windstorm activity, in the United States in particular[citation needed], has focused interest in measures that can be used to lower the likelihood of damage to structures. Billions of dollars of damages have resulted from such strong winds and the manner in which structures have been built in the affected areas in the United States.

Some building codes address mitigation measures, such as the Florida Building Code,[1] which was influenced by scientific observations[which?] and lessons[citation needed] learned by the Institute of the Florida International University[2] called International Hurricane Research Center.[3]

An important decision in individual preparedness is determining if and when to evacuate an area that will be affected by a tropical cyclone.[4] If evacuation is not possible or necessary, other preparedness actions include storing supplies, securing a home against extreme winds and rain, and making plans with others prior to the storm's landfall.

Preparedness also may include having discussed evacuation plans and routes, and informing others of those plans before a disaster occurs.

Evacuation to hurricane shelters is an option of last resort[citation needed]. Shelter space is first come first serve and only intended preserve human life. Buildings designated as shelters in Florida are required to only have been constructed to meet minimum code requirements applicable at the time of design[citation needed]. Some shelters are expected to protect occupants from wind and water but are not expected to provide food, water, sanitation, or bedding.[5]

An important decision a homeowner should make is to locate the building outside of range from the coast that is exposed to storm surge. Regardless of protection from the effects of wind, a building can be flooded or destroyed by storm surge waters.

To mitigate the effects of high winds and associated debris impact, the home can be examined out by an experienced hurricane mitigation professional. Many hurricane protection companies offer free consultations as part of their marketing strategy. The State of Florida has taken steps to help its homeowners in the area of hurricane preparedness through its My Safe Florida Home grant program.[6] Qualified homeowners receive a free in-home assessment of their home's hurricane readiness. The state matches funds spent by the homeowner, up to a $5,000 limit.[citation needed]

When making these types of home improvements, there are two major areas of focus: the roof and the openings.

Homes may be retrofitted to withstand the extreme conditions of a tropical cyclone. Common modifications include reinforcing gabled roofs, applying additional adhesives to roof shingles, installing hurricane straps and clips to ensure the roof stays in place despite high winds.[7] Hurricane resistant shutters, as well as impact resistant glass may help keep windows closed from driving rain, despite flying debris.

Reinforcing garage doors and entry doors is also common practice for hurricane preparing a home.[8] Garage doors may be protected by fabric screens, made of a strong woven fabric, to keep out projectiles and to reinforce the door.

The goal of these mitigation measures and products is to decrease the likelihood of severe damage a home. There is no guarantee that these measures will safeguard any home against any kind of storm and the projectiles that may come with a storm, but a well-protected home is far more likely to come through a hurricane in better shape than a home that has little or no protection. 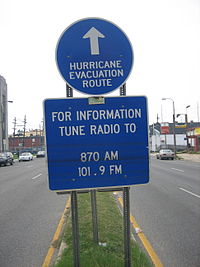 Hurricane mitigation uses policies to make buildings and other infrastructure more resistant to the effects of tropical cyclones. In addition to facilities themselves being at risk, the internal contents of the structures can be damaged as result of exposure to water if the building envelope is breached, usually as a result of the strong winds associated with hurricanes and tropical storms. Although the negative pressure caused by high velocity wind flowing over a building roof can cause the roof to fail with the building envelope intact,[9] broken windows allow the air pressure to rise inside a building, creating an even greater pressure difference, and increasing the likelihood of roof failure. This pressure increase results after an opening, that is, a window or door, is breached after being struck and broken by wind blown debris.

Few codes make the use of hurricane mitigation products mandatory[citation needed]. As the field is rather new to construction, few standards exist to address uniform testing or product certification of product installations[citation needed].

There is no single test standard or facility capable of qualifying the protection of an entire building. The Cyclone Testing Station [10] in Australia can test building systems (e.g., roofs, exterior cladding), and indirectly test entire small buildings with structural loading to simulate wind pressures. In the United States, the test facilities at the FM Global Research Campus includes both direct wind testing of roof components to speeds up to 160 mph (260 km/h),[11] and roof uplift simulation using suction tables per industry standards.[12]