Mudslide
This article is about the geologic hazard. For other uses, see Mudslide (disambiguation).

A mudslide is the most rapid (up to 80 km/h, or 50 mph) and fluid type of downhill mass wasting. It is a rapid movement of a large mass of mud formed from loose soil and water. Similar terms are mudflow, mud stream, debris flow (e.g. in high mountains), jökulhlaup, and lahar (from volcanoes, see also pyroclastic flow). 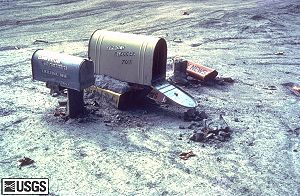 Mailboxes caught in a mudflow 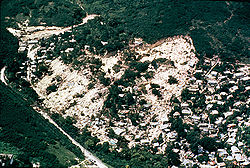 The Mameyes mudslide disaster, in barrio Tibes, Ponce, Puerto Rico, was caused by heavy rainfall from Tropical Storm Isabel in 1985. The mudslide destroyed more than 100 homes and claimed an estimated 300 lives.

Heavy rainfall, snowmelt, or high levels of ground water flowing through cracked bedrock may trigger a movement of soil or sediments. Floods, debris- and mud flows may also occur when strong rains on hill or mountain slopes cause extensive erosion and/or what is known as "channel scour". The 2006 Sidoarjo mud flow may have been caused by rogue drilling.

Some broad mudflows are rather viscous and therefore slow; others begin very quickly and continue like an avalanche. If large enough they can devastate villages and countrysides. They are composed of at least 50% silt and clay-sized materials and up to 30% water. Mudflows are common even in the hills around Los Angeles where they have destroyed many homes built on hillsides without sufficient support[citation needed].

The point where a muddy material begins to flow depends on its grain and the water content. Fine grainy material or soil has a smaller friction angle than a coarse sediment or a debris flow, but falling rock pieces can trigger a material flow, too. On December 14, 1999 in Vargas, Venezuela, a mudslide known as The Vargas tragedy, which significantly altered more than 60 kilometers (37 mi) of its coastline, was triggered due to heavy rainfall and caused estimated damages of USD $1.79 to $3.5 billion, a death toll considered to be between 10,000 and 30,000, 85,000 people evacuated and led to the complete collapse of the state's infrastructure.

Landslide is a general term referring to all types of surface movement particularly avalanches involving the mass movement downhill of soil, rock or snow under the action of gravity. Landslides and avalanches can be devastating in terms of human life and general destruction. Mudslides are caused by unusually heavy rain or a sudden thaw. They consist mainly of mud and water plus fragments of rock and other debris, this causes them to behave like a flood. They can move houses off their foundations or bury a place within minutes, this is due to their incredibly strong currents. Every year combined they kill more people than typhoons, hurricanes and cyclones do. They are rarely given media coverage and are not recognised as much as they should be for their fatalities.

When a mudslide occurs it is given four named areas, the 'main scarp', in bigger mudslides the 'upper and lower shelves' and the 'toe'. The main scarp will be the original area of incidence, the toe is the last affected area(s). The upper and lower shelves are located wherever a large dip (due to mountain or natural drop) in in the mudslides path. Due to this a mudslide can have many shelves.

The following is a list of major landslides or mudslides causing the death of at least 30 people in the world in 2010:

Jan. 1: Heavy rain triggered two mudslides on the Ilha Grande resort near the Brazilian city of Rio de Janeiro. A luxury hotel was swept away, killing at least 30 people.

March 1: Ninety-four bodies were found and 320 people were reported missing after a mudslide spawned by torrential rains in the district of Bududa in eastern Uganda engulfed three villages.

April 5: Floods and mudslides in the Brazilian state of Rio de Janeiro killed at least 212 and injured 161. More than 100 were reported missing.

June 15: Powerful landslides triggered by heavy rains killed at least 48 people and left dozens of others missing in southeastern Bangladesh.

Aug. 7: At least 63 people were killed in landslides and mudslides in northern Pakistan.

Sept. 2-5: Three days of torrential rains set off scores of landslides across Guatemala, killing at least 45 civilians and rescuers, affecting some 50,000 people and causing an economic loss of 375 million to 500 million U.S.dollars.

The world's largest historic landslide (in terms of volume) occurred during the 1980 eruption of Mount St. Helens, a volcano in the Cascade Mountain Range in the State of Washington, USA. The volume of material was 2.8 km³. Directly in the path of the huge mudslide was Spirit Lake. Normally a chilly 5°C, the mudslide instantly raised the temperature to near 38°C. Today the bottom of Spirit Lake is 100 feet above the original surface. The lake now has two and a half times more surface area than it did before the eruption.

However, the world's largest prehistoric landslide, discovered to date, took place in south-western Iran, and is named the Saidmarreh Landslide. The landslide was located on the Kabir Kuh anticline in Southwest Iran at 33 degrees N, 47.65 degrees E. The landslide had a volume of about 20 cubic kilometers, a depth of 300 m, a travel distance of 14 km and a width of 5 km. This means that about 50 billion tons of rock moved in this single event alone.

The area most generally recognised as being at risk of a dangerous mudslide are:

•Areas where landslides have occurred before

•Steep slopes and areas at the bottom of slopes or canyons

•Slopes that have been altered for construction of buildings and roads

•Channels along a stream or river

•Areas where surface runoff is directed

Before intense rainfall or storms, check to see if your area has had mudslides in the past, and educate yourself regarding local area evacuation or emergency plans. Families should also consider making their own emergency plan, and may wish to consider permanently leaving an area where mudslides are frequent.

During intense rainfall or storms, listen to weather warnings on the radio, look for tilted trees or posts, and listen for rumbling sounds which might indicate that a landslide or mudslide is approaching. If you see a small trickle of mud in a wash, creek or stream, move away from the area as quickly as possible; it may be a warning sign that a larger flow is imminent. Finally, if you do see a mudslide approaching, you should get to high ground out of its path as quickly as possible. If you see rocks or other debris approaching your position, find shelter and take cover, if possible under a piece of heavy furniture such as a desk or table.

After a mudslide has occurred, check for injured or trapped people, but try to avoid entering the mudslide's path. Listen for emergency instructions on the radio or TV. If you see that utility lines or cables in the area are broken, report them to the proper authorities as soon as possible.[1]