German New Guinea (German: Deutsch-Neuguinea) was the first part of the German colonial empire. It was a protectorate from 1884 until 1914 when it fell to Australia following the outbreak of the First World War. It consisted of the northeastern part of New Guinea and several nearby island groups. The mainland part of German New Guinea and the nearby islands of the Bismarck Archipelago are now part of Papua New Guinea.

The main part of German New Guinea was formed by Kaiser-Wilhelmsland, the northeastern part of New Guinea. The islands to the east of Kaiser-Wilhelmsland, on annexation, were renamed the Bismarck Archipelago (formerly the New Britannia Archipelago) and the two largest islands renamed Neu-Pommern (or New Pomerania, today's New Britain) and Neu-Mecklenburg (New Ireland).[1]

With the exception of German Samoa, the German islands in the Western Pacific formed the 'Imperial German Pacific Protectorates'. These were administered as part of German New Guinea and they included the German Solomon Islands (Buka, Bougainville and several smaller islands), the Carolines, Palau, the Marianas (except for Guam), the Marshall Islands and Nauru. The total land area of German New Guinea was 249,500 km². [2]

The first Germans in the South Pacific were probably sailors on the crew of ships of the Dutch East India Company: during Abel Tasman's first voyage, the captain of the Heemskerck was one Holleman (or Holman), born in Jever in northwest Germany.[3][4] Hanseatic League merchant houses were the first to establish footholds: Johann Cesar Godeffroy & Sohn of Hamburg, headquartered at Samoa from 1857, operated a South Seas network of trading stations especially dominating the copra trade and carrying German immigrants to various South Pacific settlements;[5][6][7] in 1877 another Hamburg firm, Hernsheim and Robertson, established a German community on Matupi Island, in Blanche Bay (the north-east coast of New Britain) from which it traded in New Britain, the Caroline and Marshall Islands.[8][9] By the end of 1875, one German trader reported: "German trade and German ships are encountered everywhere, almost at the exclusion of any other nation".[10]

In the late 1870s and early 1880s, an active minority, stemming mainly from a right-wing National Liberal and Free Conservative background, had organized various colonial societies all over Germany in order to persuade Chancellor Bismarck to embark on a colonial policy. The most important ones were the "Kolonialverein of 1882" and the Gesellschaft für Deutsche Kolonisation founded in 1884.[11] Bismarck's initial response may be summed up by a marginal note he wrote in 1881: "Colonies demand a fatherland in which the national feeling is stronger than the hatred of the parties [for each other]".[12]

On 24 April 1884, Bismarck signalled a change in policy by placing German trading interests in southwestern Africa under the protection of the German Empire.[13] Bismarck told the Reichstag on 23 June 1884 of the change of German colonial policy: annexations would now proceed but by grants of charters to private companies.[14]

The 27 November 1882 edition of the Augsburg Allgemeine Zeitung carried an article which the Colonial Secretary of the British colony of New South Wales drew to the attention of the editor of the Sydney Morning Herald and, on 7 February 1883, the paper published a summary of the article under the heading German annexation of New Guinea. The argument lifted from the German paper began by stating that New Guinea fell into the Australian sphere but had been neglected; although the Portuguese had explored in the 16th century, it was the Dutch from the 17th century "who seemed better satisfied with the country than other European nations had been" but they had overreached themselves and had fallen back towards Java, Sumatra and Celebes. Recent explorations had given the basis for reconsideration: it "is considered useful by geology and biology people as holding in its forests the key to solve problems... a profitable field for cultivation" but London had only sent missionaries to save souls. "As we Germans have learnt a little about conducting colonial policy, and as our wishes and plans turn with a certain vivacity towards New Guinea... according to our opinion it might be possible to create out of the island a German Java, a great trade and plantation colony, which would form a stately foundation stone for a German colonial kingdom of the future."

The publication of the Sydney Morning Herald article caused a sensation and not just in the colony of New South Wales: over the border, in the British colony of Queensland [15] where the shipping lanes of the Torres Strait and the beche-de-mer trade were of commercial significance,[16] the Queensland Premier, Sir Thomas McIlwraith who led a political party "considered to represent the interests of the plantation owners in Queensland",[15] drew it to the attention of the Queensland Governor together with the general situation in New Guinea and urged annexation of the island.[17] He also instructed the London Agent for Queensland to urge the Imperial Colonial Office to an act of annexation.[18]

"Impatient with the lack of results from this procedure" Premier McIlwraith on his own authority ordered a Queensland Police Magistrate in March 1883 to proclaim the annexation on behalf of the Queensland government [17] of New Guinea east of the Dutch boundary at 141E.[19] When news of this reached London, the Secretary of State for the Colonies, Lord Derby promptly repudiated the act.[17][1] When the matter came before Parliament, Lord Derby advised that the British Imperial Government "were not ready to annex New Guinea in view of its vast size and unknown interior, the certainty of native objections and administrative expense".[20] 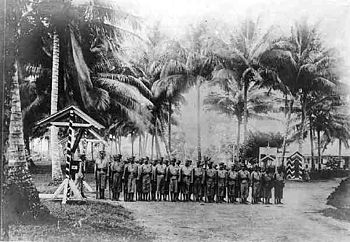 On his return to Germany from his 1879–1882 Pacific expedition, Otto Finsch joined a small, informal group interested in German colonial expansion into the South Seas led by the banker, Adolph von Hansemann. Finsch encouraged them to pursue the founding of a colony on the north-east coast of New Guinea and the New Britain Archipelago even providing them with an estimate of the costs of such a venture.[21]

On 3 November 1884, under the auspices of the Deutsche Neuguinea-Compagnie (New Guinea Company), the German flag was flown over Kaiser-Wilhelmsland, the Bismarck Archipelago and the German Solomon Islands.

To obtain a local labour force and expand plantation agriculture, the colonial officials sent the army to control tribal areas. They then imposed new laws required the natives to provide four weeks of labour a year, and pay a poll tax in cash. Often workers were rounded up and had little choice, but for the first time were paid wages. Some colonial officials, especially Albert Hahl, worried about a drastic depopulation of natives, so they tried to recruit workers from Southeast Asia. They had little success. After 1910 Hahl tried to minimize the negative effects of aggressive labour mobilization by prohibiting the recruitment of women in northern New Ireland and closing other areas to recruiting. The German planters protested and Hahl was forced to extend colonial control to unconquered areas to obtain additional workers.[22] 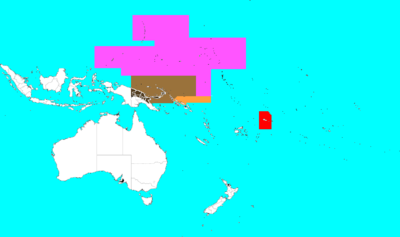 In 1899 the German government agreed to pay Spain 25,000,000 Pesetas (equivalent to 16,600,000 goldmarks) for the Caroline Islands and the Mariana Islands (excluding Guam, which had been ceded to the USA the previous year). These islands became a protectorate and were administered from German New Guinea.[23] The Marshall Islands were added in 1906.

Following the outbreak of World War I, Australian troops captured Kaiser-Wilhelmsland and the nearby islands in 1914, after a short resistance led by Captain Carl von Klewitz and Lt. Robert "Lord Bob" von Blumenthal, while Japan occupied most of the remaining German possessions in the Pacific. The only significant battle occurred on 11 September 1914 when the Australian Naval and Military Expeditionary Force attacked the low-power wireless station at Bitapaka (near Rabaul) on the island of New Britain, then Neu Pommern. The Australians suffered six dead and four wounded — the first Australian military casualties of the First World War. The German forces fared much worse, with one German officer and 30 native police killed and one German officer and ten native police wounded. On 21 September all German forces in the colony surrendered.

Map of the Kaiserwilhelmsland, the German colony of New Guinea, 1884–1919

However, Leutnant (later Hauptmann) Hermann Detzner, a German officer, and some 20 native police evaded capture in the interior of New Guinea for the entire war. Detzner was on a surveying expedition to map the border with Australian-held Papua at the outbreak of war, and remained outside militarised areas. Detzner claimed to have penetrated the interior of the German portion (Kaiser Wilhelmsland) in his 1920 book Vier Jahre unter Kannibalen ("Four Years Among Cannibals"). These claims were heavily disputed by various German missionaries, and Detzner recanted most of his claims in 1932.

The first postage stamps of the colony were issued in 1897, as overprints reading "Deutsch – / Neu-Guinea" on the contemporary stamps of Germany. In 1901, the Yacht issue included stamps for the colony, inscribed "DEUTSCH-NEU-GUINEA." The 5pf, 10pf, and 5m values were reprinted in 1914 on watermarked paper and inscribed "DEUTSCH-NEUGUINEA," but these did not reach the colony before it was occupied and were never put in use, nor was the reprint of the 3pf value made in 1919.

The stamps are available to collectors today at prices ranging from about $1 US, up to $500 for a validly used 5m stamp. Very few stamps of the higher values were ever used, and their prices are 10–20 times higher than for mint copies. Fake cancellations exist.

After the Australian occupation, stocks of the unwatermarked stamps, along with some registration labels, were overprinted with "G.R.I." and a value in pence or shillings; see New Britain for further details.