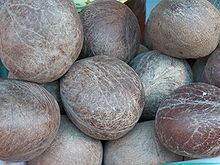 Copra is the dried meat, or kernel, of the coconut. Coconut oil extracted from it has made copra an important agricultural commodity for many coconut-producing countries. It also yields coconut cake which is mainly used as feed for livestock.

Copra has traditionally been grated and ground then boiled in water to extract coconut oil. It was long used by Pacific island cultures and became a valuable commercial product for merchants in the South Seas and South Asia in the 1860s. This 19th-century copra trading inspired Robert Louis Stevenson's 1893 novella The Beach of Falesá, based on his experiences in Samoa.[1] Nowadays, the process of coconut oil extraction is done by crushing copra to produce coconut oil (70%); the by-product is known as copra cake or copra meal (30%).

Once the oil is extracted, the remaining coconut cake is 18-25% protein but contains so much dietary fiber it can not be eaten in large quantities by humans. Instead it is normally fed to ruminants.[2] 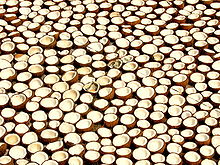 Making copra – removing the shell, breaking up, drying – is usually done where the coconut palms grow. Copra can be made by smoke drying, sun drying, or kiln drying. Sun drying requires little more than racks and sufficient sunlight. Halved nuts are drained of water, and left with the meat facing the sky; they can be washed to remove mold-creating contaminants. After two days the meat can be removed from the shell with ease, and the drying process is complete after three to five more days (up to seven total). Sun drying is often combined with kiln drying, eight hours of exposure to sunlight means the time spent in a kiln can be reduced by a day and the hot air the shells are exposed to in the kiln is more easily able to remove the remaining moisture. This process can also be reversed, partially drying the copra in the kiln and finishing the process with sunlight. There are advantages and disadvantages to both - starting with sun drying requires careful inspection to avoid contamination with mold while starting with kiln-drying can harden the meat and prevent it from drying out completely in the sun. In India, small but whole coconuts can be dried over the course of eight months to a year, and the meat inside removed and sold as a whole ball. Meat prepared in this fashion is sweet, soft, oily and is cream-colored instead of being white. Coconut meat can be dried using direct heat and smoke from a fire, using simple racks to suspend the coconut over the fire. The smoke residue can help preserve the half-dried meat but the process overall suffers from unpredictable results and the risk of fires.[3]

While there are some large plantations with integrated operations, copra remains primarily a smallholder crop. The major producing country is the Philippines. It is also a major exporter. In former years copra was collected by traders going from island to island and port to port in the Pacific Ocean but South Pacific production is now much diminished, with the exception of Papua New Guinea, the Solomon Islands and Vanuatu.

Copra production begins with the coconut plantations. Coconut trees are generally spaced 9 m (30 ft) apart, allowing a density of 100-160 coconut trees per hectare. A standard tree bears around 50-80 nuts a year, and average earnings in Vanuatu (1999) were USD 0.20 per kg (one kg equals 8 nuts), allowing approximately $320 USD to be earned yearly for each planted hectare.

In India, Tiptur in Tumkur District in Karnataka state is notable for its copra.

Coconut oil is extracted from dry copra using oil expellers. To get maximum amount of oil from the copra it has to be dried well. In houses people dry it in sunlight and for large scale production big driers are used. In Kerala, oil extraction is widely done as coconut oil is widely used in cooking and for certain medicines. The left-over material after oil extraction is called oil cake. Oil cake is used as animal feed.

As an animal feed

Copra meal is used as fodder for horses and cattle. Its high oil levels and protein are fattening for stock.[4] The unique benefits of copra meal for horses and cattle have been researched by Dr T.J. Kempton.[citation needed] The protein in copra meal has been heat treated and provides a source of high quality protein for cattle, sheep and deer, because it does not break down in the rumen.

High quality copra meal contains <12% non structural carbohydrate (NSC)[2] which makes this product well suited for feeding to all horses that are prone to ulcers, insulin resistance, colic, tying up, and acidosis [3]

Copra has been classed as a dangerous good due to its spontaneously combustive nature. It is identified as a Division 4.2 substance. It has been forbidden by ICAO from flight without the express written permission of a state authorized agency.