Most of the city region of Coimbatore comes under this district. Proximity to the city of Coimbatore has its own impact on the district, with a considerable daily commuting population. The rural people are mostly agriculturists, although with the advent of SEZs in the area, service and IT industries are booming. The second largest city in Tamil Nadu, which is located approximately 497 km from Chennai, the state capital. It is highest revenue yielding district in the state, next to Chennai district.

Coimbatore district lies in the western part of Tamil Nadu, part of the Kongu Nadu region. The district borders with Palakkad district of Kerala in the West, Nilgiris district in the north, Erode district in the North East and East, Idukki district of Kerala in the South and Dindigul district in the south east. The district has an area of 7,649 square kilometers. The South Western and Northern parts are hilly, part of the Western Ghats, and enjoys pleasant climate all throughout the year with heavy rainfall. To the West is the Palghat Gap, the only major pass in the long stretch of the ghats abutting Tamil Nadu and Kerala. The Palghat Gap, connecting Coimbatore city and Palakkad city, serves as an important transit link for both the states. The rest of the district lies in the rain shadow region of the Western Ghats and experiences salubrious climate most parts of the year. The mean maximum and minimum temperatures for Coimbatore city during summer and winter vary between 35°C to 18°C.[3] The average annual rainfall in the plains is around 700 mm with the North East and the South West monsoons contributing to 47% and 28% respectively to the total rainfall.[4] The major rivers flowing through the district are Bhavani, Noyyal, Amaravathi and Aliyar. The Siruvani dam is the main source of drinking water for Coimbatore city and is known for its tasty water. Siruvani dam is said to be naturally formed dam surrounded by mountains of western ghats and there are no rivers at all in the name of siruvani.

Tamil is the principal language spoken in the district, with sizable minorities of Telugu, Malayalam and Kannada speakers. Hindus formed the majority of the population at 90.08% followed by Muslims at 5.33%, Christians at 4.35% and others at 0.24%.[6] As per the 2001 Census, Coimbatore district had a population density of 600 persons per square kilometer and a sex ratio of 963 females for every 1000 males.

The district collector of Coimbatore is Thiru M. Karunakaran, IAS and the District Revenue Officer is Thiru. A. Shanmuga Sundaram.[9] The following table enlists the details of Revenue Divisions, Taluks, Firkas and Revenue Villages.[10] 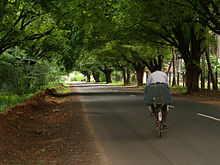 NH 209 which passes through Coimbatore district 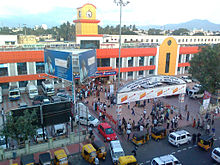 Coimbatore district is well connected by roads and highways. There are five Regional Transport Offices at[12]:

There are three National Highways namely NH-47, NH-67 and NH 209 connects the City to other parts of the States. There are railway stations at Peelamedu, Singanallur, Vellalore, Coimbatore North Junction, Mettupalayam, Irugur, Podanur and the Coimbatore City railway station is the largest railway station.[13] The district is served by the Coimbatore International Airport about 17 km from the city centre. Coimbatore Junction is the second highest revenue yielder in Southern Railways after Chennai in Tamil Nadu. 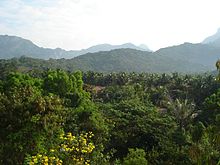 Coimbatore district is home to Indira Gandhi Wildlife Sanctuary and National Park. The Park and the Sanctuary are the core of the Nilgiri Biosphere Reserve and is under consideration by UNESCO as part of The Western Ghats World Heritage site.[14] The park is home to a wide variety of flora and fauna typical of the South Western Ghats. There are over 2000 species plants of which about 400 species are of prime medicinal value. The animals in the park include Tiger, Leopard, Sloth Bear, Elephant, Indian Giant Flying Squirrel. The birds endemic to the Western Ghats residing here include Nilgiri Wood Pigeon, Nilgiri Pipit, Nilgiri Flycatcher, Malabar Grey Hornbill, Spot-billed Pelican etc. The Amaravathi reservoir and the Amaravathi river are breeding grounds for the Mugger Crocodiles.[15]

Vellalore Vellalore is a part of Coimbatore City on north bank of noyyal . It is rich in Agriculture. It was recently meged with the Corporation of Coimbatore.

Textiles are the major industry in the Coimbatore district; it is one of the important textile hubs of India. Coimbatore is also called the "Manchester of South India" because it houses many textile industries. India's leading Textile Machinery Manufacturer "Lakshmi Machine Works Ltd" produces textile machinery for textile mills in India and abroad. LMW is the pride of Coimbatore. There are many electric pump manufacturing companies in and around Coimbatore, such as Deccan, CRI, Texmo, KSB, Sharp. Coimbatore also houses some auto component manufacturing brands, such as Roots, Pricol and LGB. German auto component major Robert Bosch started their R & D facility in Coimbatore. Coimbatore also houses many Information Technology and Business Process Outsourcing companies such as Cognizant Technology Solutions and Perot Systems. The district is home to almost 50% of the poultry population of Tamil Nadu.[16]