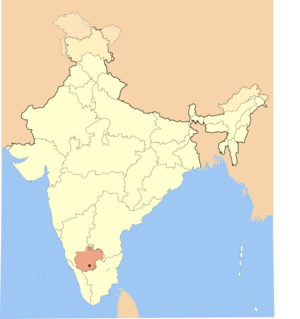 The Western Ganga Dynasty (350 – 1000 CE) (:ಪಶ್ಚಿಮ ಗಂಗ ಸಂಸ್ಥಾನ) was an important ruling dynasty of ancient in . They are known as Western Gangas to distinguish them from the Eastern Gangas who in later centuries ruled over modern . The general belief is the Western Gangas began their rule during a time when multiple native clans asserted their freedom due to the weakening of the empire in , a geo-political event sometimes attributed to the southern conquests of . The Western Ganga sovereignty lasted from about 350 to 550 CE, initially ruling from and later moving their capital to on the banks of the in modern .

After the rise of the imperial Chalukyas of Badami, the Gangas accepted Chalukya overlordship and fought for the cause of their overlords against the of . The Chalukyas were replaced by the Rashtrakutas of Manyakheta in 753 CE as the dominant power in the . After a century of struggle for autonomy, the Western Gangas finally accepted Rashtrakuta overlordship and successfully fought alongside them against their foes, the of . In the late 10th century, north of Tungabhadra river, the Rashtrakutas were replaced by the emerging Western Chalukya Empire and the Chola Dynasty saw renewed power south of the river. The defeat of the Western Gangas by Cholas around 1000 resulted in the end of the Ganga influence over the region.

Though territorially a small kingdom, the Western Ganga contribution to polity, culture and literature of the modern south Karnataka region is considered important. The Western Ganga kings showed benevolent tolerance to all faiths but are most famous for their patronage towards Jainism resulting in the construction of monuments in places such as and . The kings of this dynasty encouraged the fine arts due to which literature in Kannada and flourished. 's writing, "Chavundaraya Purana" of 978 CE, is an important work in Kannada prose. Many classics were written on various subjects ranging from to management.

Multiple theories have been proposed regarding the ancestry of the founders of the Western Ganga dynasty (prior to the 4th century).Western Ganga Kings Infobox Some mythical accounts point to a northern origin

By the time of Harivarman in 390, the Gangas had consolidated their kingdom with as their capital. Their move from the early capital Kolar may have been a strategic one with the intention of containing the growing Kadamba power.

Politically, the Gangas were feudatories and close allies who also shared matrimonial relations with the Chalukyas. This is attested by inscriptions which describe their joint campaigns against their arch enemy, the Pallavas of Kanchi.

In 753, when the Rashtrakutas replaced the Badami Chalukyas as the dominant force in the Deccan, the Gangas offered stiff resistance for about a century.

After an uneventful period, ascended the throne in 938 with the help of Rashtrakuta (whose daughter he married).

The Western Ganga administration was influenced by principles stated in the ancient text "". The "praje gavundas" mentioned in the Ganga records held similar responsibilities as the village elders ("gramavriddhas") mentioned by . Succession to the throne was hereditary but there were instances when this was overlooked.

Inscriptions that specify land grants, rights and ownership were descriptive of the boundaries of demarcation using natural features such as rivers, streams, water channels, hillocks, large boulders, layout of the village, location of forts ("kote") if any in the proximity, irrigation canals, temples, tanks and even shrubs and large trees. Also included was the type of soil, the crops meant to be grown and tanks or wells to be excavated for irrigation.

Lands that were exempt from taxes were called "manya" and sometimes consisted of several villages. They were granted by local chieftains without any reference to the overlord, indicating a de-centralised economy. These lands, often given to heroes who perished in the line of duty were called "bilavritti" or "kalnad".

The Western Gangas gave patronage to all the major religions of the time; and the Hindu sects of , Vedic and . However scholars have argued that not all Gangas kings may have given equal priority to all the faiths. Some historians believe that the Gangas were ardent Jains.

From the beginning of the 8th century, patronage to Shaivism increased in every section of the society; the landed elite, landlords, assemblies ("samaya"), schools of learning ("aghraharas")

The Western Ganga society in many ways reflected the emerging religious, political and cultural developments of those times. Women became active in local administration because Ganga kings distributed territorial responsibility to their queens such as the feudal queen Parabbaya-arasi of Kundattur

The devadasi system ("sule" or courtesan) in temples was prevalent and was modelled after the structures in the royal palace.

By virtue of a Hindu belief that killing of a brahmin ("Bramhatya") was a sin, capital punishment was not applicable to them.

The presence of numerous "Mahasatikals" (or "Mastikal" - hero stones for a woman who accepted ritual death upon the demise of her husband) indicates the popularity of among royalty.

The Western Ganga rule was a period of brisk literary activity in Sanskrit and Kannada, though many of the writings are now considered extinct and are known only from references made to them. Chavundaraya's writing, "Chavundaraya Purana" (or "Trishashtilakshana mahapurana") of 978 CE, is an early existing work in prose style in Kannada and contains a summary of the Sanskrit writings, "Adipurana" and "Uttarapurana" which were written a century earlier by Jinasena and Gunabhadra during the rule of Rashtrakuta .

The earliest postulated Kannada writer from this dynasty is King Durvinita of the 6th century. of 850 CE, refers to a Durvinita as an early writer of Kannada .

In an age of classical Sanskrit literature, Madhava II (brother of King Vishnugopa) wrote a treatise "Dattaka Sutravritti" which was based on an earlier work on erotics by a writer called Dattaka. A Sanskrit version of "Vaddakatha", a commentary on Panini's grammar called "Sabdavathara" and a commentary on the 15th chapter of a Sanskrit work called "Kiratarjunneya" by poet Bharavi (who was in Durvinita's court) are ascribed to Durvinita.

The Western Ganga style of architecture was influenced by the Pallava and Badami Chalukya architectural features, in addition to with indigenous Jain features.

The monolith of commissioned by Chavundaraya is considered the high point of the Ganga sculptural contribution in ancient Karnataka. Carved from fine-grained white granite, the image stands on a lotus. It has no support up to the thighs and is convert|60|ft|m tall with the face measuring convert|6.5|ft|m. With the serene expression on the face of the image, its curled hair with graceful locks, its proportional anatomy, the monolith size, and the combination of its artistry and craftsmanship have led it to be called the mightiest achievement in sculptural art in medieval Karnataka.

The Western Gangas used Kannada and Sanskrit extensively as their language of administration. Some of their inscriptions are also bilingual in these languages. In bilingual inscriptions the formulaic passages stating origin myths, genealogies, titles of Kings and benedictions tended to be in Sanskrit, while the actual terms of the grant such as information on the land or village granted, its boundaries, participation of local authorities, rights and obligations of the grantee, taxes and dues and other local concerns were in the local language.