Thoothukudi district
This article is about the district. For its eponymous headquarters, see Thoothukudi.

Thoothukudi District(Tamil: தூத்துக்குடி மாவட்டம்), also known as Tuticorin District, is a district of Tamil Nadu state in southern India. Thoothukudi (Tuticorin) is the district headquarters. It is also known for Pearl cultivation with abundance of pearls found in the seas of Thoothukudi. It is known as the gate way of Tamil Nadu.

Thoothukudi district is situated in the extreme South-Eastern corner of Tamil Nadu. It is bounded on the north by the districts of Tirunelveli, Virudhunagar, and Ramanathapuram, on the east and southeast by the Gulf of Mannar and on the west and southwest by Tirunelveli district. The total area of the district is 4621 km². The administrative headquarters is an urban agglomeration and also one of the taluk headquarters within. Thoothukkudi District was derived from Tirunelveli District in 1986.

The district of Thoothukudi was carved out as a separate district on 20 October 1986 as a result of bifurcation of the Tirunelveli district of Tamil Nadu State. Thiru. R. Arumugam, I.A.S. was the first Collector of this District.

Thoothukudi (Tuticorin) is one of the major seaports in India with its history dating back to the 6th century A.D..

There are no large reservoirs in this district so the Papanasam and Manimuthar dams located in the Tirunelveli district in the Thamirabarani River's flow are the main sources of irrigation. Other than the Thamirabarani River, the river Vaipar in Vilathikulam taluk, the river Karumeni which traverses through Sathankulam, and Tiruchendur taluks, Palayakayal are all sources. In Ottapidaram taluk, there is one small reservoir at Eppodumvendran village. And banana tree is famous in Kulaiyankarisal here most banana leaf is delivered to various district

Paddy is cultivated in the Palayakayal Srivaikundam, Sattankulam and Tiruchendur taluks. Cumbu, Cholam, Kuthiraivali and other pulses are raised in the dry tracts of Kovilpatti, Vilathikulam,Nagalapuram Ottapidaram, and Thoothukudi taluks. Cotton is cultivated in Kovilpatti, Ottapidaram and Thoothukudi Taluks. Groundnut cultivation is undertaken in Kovilpatti, Tiruchendur, and Sattankulam taluks. Groundnut cake is being used as manure and cattle feed. Nagalapuram makes its economy to be solely dependent agriculture. Main business of this area is dry chilly, cholam, cumbu wood charcoal, etc.

With 35% share, the district is the top producer of Cumbu in Tamil Nadu.[7]

Palmyrah trees are grown mostly in Tiruchendur, Srivaikundam, Sattankulam and Vilathikulam taluks. In srivaikundan taluk, there are so many lakes like sivagalai kulam and perungulam near Sivagalai which is the main sources for the farmers in the village Sivagalai and its surroundings. Jaggery is produced from palmyrah juice; the production of jaggery is the main occupation of the people of Tiruchendur and Sattankulam taluks. Banana and other vegetables are raised in Srivaikundam and Tiruchendur taluks. The road going towards Kulayankarisal from Thiruchendur has banana farms on one side and a salt farm on the other; each farm needs a different type of water. Thoothukudi district is the largest exporter of bananas in Tamil Nadu.

The district constitutes 70 per cent of the total salt production of Tamil Nadu and 30 per cent of that of India. Tuticorin is the second largest producer of Salt in India next to Gujarat.

Puthiamputhur is one of important village involved in manufacturing ready-made clothes. The clothes are sent all over Tamil Nadu. It provides employment for more than 10,000 people mostly hailing from near villages. 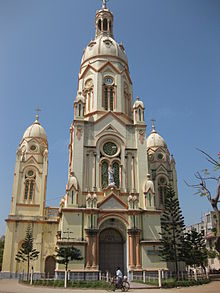 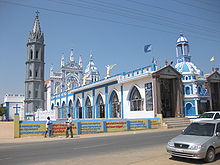 Meignanapuram church is one of the famous churches. Its height is 196 feet.