The nine-banded armadillo (Dasypus novemcinctus), or the nine-banded, long-nosed armadillo, is a species of armadillo found in North, Central, and South America, making it the most widespread of the armadillos.[2] Its ancestors originated in South America, and remained there until 3 million years ago, when the formation of the Isthmus of Panama allowed them to enter North America as part of the Great American Interchange. The nine-banded long-nosed armadillo is a solitary, mainly nocturnal animal, found in many kinds of habitats, from mature and secondary rainforests to grassland and dry scrub. It is an insectivorous animal, feeding chiefly on ants, termites, and other small invertebrates. The armadillo can jump 3–4 feet (91–120 cm) straight in the air if sufficiently frightened, making it a particular danger on roads.[3]

The nine-banded armadillo evolved in a warm rainy environment and is still most commonly found in regions resembling its ancestral home. However, it is a very adaptable animal that can also be found in scrublands, open prairies, and tropical rainforests. They cannot thrive in particularly cold or dry environments, as their large surface area, which is not well insulated by fat, makes them especially susceptible to heat and water loss.[4] 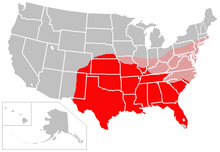 The current (as of approximately 2009-2010) range (shaded red), and predicted future range (shaded pink) of the nine-banded armadillo in the USA

The nine-banded armadillo has been rapidly expanding its range both north and east within the United States. The armadillo crossed the Rio Grande from Mexico in the late 19th century, and was introduced in Florida at about the same time by humans. By 1995, the species had become well-established in Texas, Oklahoma, Louisiana, Arkansas, Mississippi, Alabama, and Florida, and had been sighted as far afield as Kansas, Missouri, Tennessee, Georgia and South Carolina. A decade later, the armadillo had become established in all of those areas and continued its migration, being sighted as far north as southern Nebraska, southern Illinois, and southern Indiana.[5] The primary cause of this rapid expansion is explained simply by the existence of few or no natural predators of the armadillo within the United States, little desire on the part of Americans to hunt or eat the armadillo, and the animals' high reproductive rate. The northern expansion of the armadillo is expected to continue until the species reaches as far north as Ohio, Pennsylvania, and New Jersey and all points southward on the East Coast of the United States. Further northward and westward expansion will probably be limited by the armadillo's poor tolerance of harsh winters, due to its lack of insulating fat and its inability to hibernate.[5] As of 2009, newspaper reports indicated the nine-banded armadillo seems to have expanded its range northward as far as Lincoln, Nebraska in the west, and as far north as Kentucky Dam and Evansville, Indiana in the east.[6][broken citation][7][8][dead link][9][not in citation given].[10] In late 2009, the state of North Carolina began considering the establishment of a hunting season for armadillo, following reports that the species has been moving into the southern reaches of the state (roughly between the areas of Charlotte, North Carolina and Wilmington, North Carolina).[11][12] Outside the United States, the nine-banded armadillo ranges southward through Central and South America into northern Argentina and Uruguay, where it is still expanding its range.[4] In 1995, armadillos were only seen in the southern tip of South Carolina; however, in two to three years they had swept across most of the state.[4]

Nine-banded armadillos are generally insectivores. They forage for meals by thrusting their snouts into loose soil and leaf litter and frantically digging in erratic patterns, stopping occasionally to dig up grubs, beetles, ants, termites, and worms, which their sensitive noses can detect through 8 inches (20 cm) of soil. They then lap up the insects with their sticky tongues. They supplement their diets with amphibians, small reptiles, fungi, tubers, and carrion.[4]

Nine-banded armadillos weigh 12–22 pounds (5.4–10.0 kg). Head and body length is 15–23 inches (38–58 cm), which combines with the 5–19 inches (13–48 cm) tail for a total length of 20–42 inches (51–110 cm). They stand 6–10 inches (15–25 cm) tall.[4] The outer shell is composed of ossified dermal scutes covered by nonoverlapping, keratinized epidermal scales, which are connected by flexible bands of skin. This armor covers the back, sides, head, tail, and outside surfaces of the legs. The underside of the body and the inner surfaces of the legs have no armored protection. Instead, they are covered by tough skin and a layer of coarse hair. The vertebrae are specially modified to attach to the carapace.[13] The claws on the middle toes of the forefeet are elongated for digging, though not to the same degree as those of the much larger giant armadillo of South America.[4] Their low metabolic rate and poor thermoregulation make them best suited for semi-tropical environments.[13] Unlike the South American three-banded armadillos, the nine-banded armadillo cannot roll itself into a ball. It is, however, capable of floating across rivers by inflating its intestines, or by sinking and running across riverbeds. The second is possible due to its ability to hold its breath for up to six minutes, an adaptation originally developed for allowing the animal to keep its snout submerged in soil for extended periods while foraging.[13] Although nine is the typical number of bands on the nine-banded armadillo, the actual number varies by geographic range.[13] Armadillos possess the teeth typical of all sloths, and anteaters. The teeth are all small, peg-like molars with open roots and no enamel. Incisors do form in the embryos, but quickly degenerate and are usually absent by birth.[13] 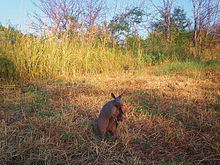 Nine-banded armadillo on its hind legs 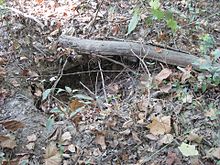 Nine-banded armadillos are solitary, largely nocturnal animals that come out to forage around dusk. They are extensive burrowers, with a single animal sometimes maintaining up to 12 burrows on its range. These burrows are roughly 8 inches (20 cm) wide, 7 feet (2.1 m) deep, and 25 feet (7.6 m) long. Armadillos mark their territory with urine, feces, and excretions from scent glands found on the eyelids, nose, and feet. Females tend to have exclusive, clearly defined territories. Males have larger territories, but theirs often overlap, and can coincide with the ranges of several females. Territorial disputes are settled by kicking and chasing. When they are not foraging, armadillos shuffle along fairly slowly, stopping occasionally to sniff the air for signs of danger. If alarmed, they can flee with surprising speed. If this method of escape fails, the armadillo may quickly dig a shallow trench and lodge itself inside. Predators are rarely able to dislodge the animal, and abandon their prey when they cannot breach the armadillo’s armor.[4]

Mating takes place during a two to three-month-long mating season, which occurs from July–August in the Northern Hemisphere and November–January in the Southern Hemisphere. A single egg is fertilized, but implantation is delayed for three to four months to ensure the young will not be born during an unfavorable time. Once the zygote does implant in the uterus, a gestation period of four months occurs, during which the zygote splits into four identical embryos, each of which develops its own placenta, so blood and nutrients are not mixed between them. After birth, the quadruplets remain in the burrow, living off the mother’s milk for approximately three months. They then begin to forage with the mother, eventually leaving after six months to a year.[4][13]

Nine-banded armadillos reach sexual maturity at the age of one year, and reproduce every year for the rest of their 12–15 year lifespans. A single female can produce up to 56 young over the course of her life. This high reproductive rate is a major cause of the species’ rapid expansion.[4]

Effect on the environment

The foraging of nine-banded armadillo can cause mild damage to the root systems of certain plants, but they make up for their disruptive habits by providing homes for skunks, cotton rats, burrowing owls, and rattlesnakes, all of which can be found living in abandoned armadillo burrows.[4]

They are typically hunted for their meat, which is said to taste like pork, but are more frequently killed as a result of their tendency to steal the eggs of poultry and game birds. This has caused certain populations of the nine-banded armadillo to become threatened, although the species as a whole is under no immediate threat.[4] They are also valuable for use in medical research, as they are one of the few animals susceptible to the human disease leprosy.[13] In Texas, nine-banded armadillos are raised to participate in armadillo racing, a small-scale, but well-established sport in which the animals scurry down a 40-foot track.[4]

During the Great Depression, the species was hunted for its meat in East Texas, where it was known as the poor man’s pork, [14] or the "Hoover hog" by those who considered President Herbert Hoover to be responsible for the depression.[15] Earlier, German settlers in Texas would often refer to the armadillo as Panzerschwein ("armored pig").[citation needed] In 1995, the nine-banded armadillo was, with some resistance, made the state small mammal of Texas,[16] where it is considered a pest and is often seen dead on the roadside. They first forayed into Texas across the Rio Grande from Mexico in the 19th century, eventually spreading across the southeast United States.[15]

North American subspecies exhibit reduced genetic variability compared with the subspecies of South America, indicating the armadillos of North America are descended from a relatively small number of individuals that migrated from south of the Rio Grande.[13]