The animal was first described by Dr J. E. Gray in 1865 from a specimen in the British Museum collected from Santa Cruz de la Sierra in eastern Bolivia as "Dasypus vellerosus".[5] 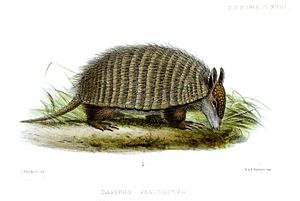 Image of Screaming Hairy Armadillo by Joseph Wolf provided in its first description by Edward Gray in 1865.

The animal was initially described by Gray as follows:[5]
"The forehead convex, with many polygonal shields ; the dorsal shield covered with abundant elongated bristly hairs ; the underside of the body covered with close hairs. Toes 5/5, the outer and inner hinder small."

These armadillos have more hair growth than other armadillo species. The armadillo has 18 bands of which six to eight are movable bands.[6] The hair on the dorsum is light brown in colour.[4]

Two subspecies are known but taxonomic confirmation is required:[2]

The Screaming Hairy Armadillo is a burrowing armadillo of arid areas from low to high altitudes.[4] It is found in parts of the Gran Chaco and Pampas areas of Argentina, Bolivia, and Paraguay. An isolated population is found in eastern Buenos Aires Province in Argentina.

The armadillo is nocturnal by summer and diurnal in winter. It can subsist for long periods without water. The armadillo burrows, often at the base of bushes and shrubs. It has multiple burrows in its range and each burrow may have more than one entrance. A burrow may be 8 to 15 inches (200 to 380 mm) in diameter and may be several metres long. The home range of an armadillo is recorded to consist of a minimum area of 3.4 ha (8.4 acres). The animal does not build a nest in its burrow which it seals during occupation.[4]

When not in its burrow, the animal spends most of its time foraging. The armadillo is omnivorous; its diet consists of insects, vertebrates and plant material (especially pods of Prosopis), varying considerably depending upon the season. The animals increase their weight by up to 10% in winter forming a layer of sub-cutaneous fat 1 to 2 cm (0.39 to 0.79 in) thick. Vertebrates form a significant part of an armadillo's diet ranging from 27.7 % by volume in summer to 13.9 % in winter, the most common prey species being lizards, birds, frogs, and the mice species Eligmodontia typus and Phyllotis griseofulvus. The armadillos ingest a lot of sand while feeding, and it may occupy as much as 50% of the volume of the stomach at a time.[4]

The gestation period of the armadillo is 60 – 75 days. The armadillos become sexually mature at 9 months and produce two litters per year.[6]

This armadillo is heavily hunted for its meat in parts of the Chaco region in Bolivia. It is at times considered an agricultural pest and killed by hunting dogs. The disjunct population of coastal Buenos Aires Province, Argentina, is adversely affected by mining activities. The carapace is particularly sought for making charangos, a South American musical instrument akin to a lute.[2]