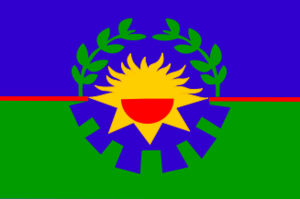 Buenos Aires Province (IPA2|ˈbwenos ˈaiɾes, Spanish: Provincia de Buenos Aires) is the most populated province of . The city of , located next to provincial territory, is an autonomous city and not part of the province. The province has a population of 13,827,203 (2001) and its capital is (694,253 inhabitants), 56 s south of the city of .

The aboriginals that inhabited the provinces before the 16th century advent of Spanish colonisation were aboriginal peoples such as the s and the Querandíes; but, their culture has been lost for, over the next 350 years, they were subjected to a virtual from which few survived. The survivors joined other or have been mostly absorbed by Argentina's European majority.

founded "Santa María del Buen Ayre" in 1536 and even though the first contact with the aboriginals was peaceful, it soon became hostile. The city was evacuated in . re-founded it in as "Santísima Trinidad y Puerto Santa María de los Buenos Aires".

Amidst ongoing conflict with the aboriginals, the cattle farms extended from Buenos Aires, whose port was always the centre of the economy of the territory. Following the creation of the at the end of the 18th century, the export of meat, leather and their derivatives through the port of Buenos Aires was the basis of the economic development of the region.

s unsuccessfully tried to peacefully assimilate the aboriginals into the an culture brought by the Spanish conquistadores. A certain balance was found at the end of the 18th century, when the Salado River became the limit between both civilizations, even though the frequent "malones" aboriginal attacks to border settlements. The end to such situation came as late as 1879 with the ("Conquista del Desierto") in which the aboriginals where almost completely exterminated.

After the independence from in , the city and province of Buenos Aires were allied in constant confrontation with the other provinces because of the federal system so controlled by Buenos Aires. The 1859 Pact of San Jose de Flores defeated secessionist aspirations "per se"; but, intermittent conflict with the nation did not truly cease until 1880, when the city of Buenos Aires was formally federalized and, thus, separated from the province itself.

was founded in with the purpose of becoming the province's capital and by that time, the province had around half a million inhabitants (about a quarter of Argentina's). Nearly a billion (1880s) dollars of British investment and pro-development, education and immigration policies pursued at the national level soon brought dramatic economic growth, however; like Argentina's, the province's population nearly doubled by 1895 and doubled again (to 2 million) by 1914.

The Buenos Aires province has an area of 307,571 km² and its neighbouring provinces clockwise from the southwest are Rio Negro, , Córdoba, Santa Fe and Entre Rios. To the east is the . It is also the largest province of Argentina.The landscape is mainly flat, with two low mountain ranges; "Sierra de la Ventana" (near ) and "Sierra de Tandil" (). The highest point is "Cerro Tres Picos" (1.239 m amsl; 38° 8' S, 61° 58' W) and the longest river is "Río Salado" (700 km).

As part of The Pampas the weather of the province is strongly influenced by the ocean, with hot summers and temperate winters. Humidity is high and precipitations are abundant and distributed over the year. The Western and Southwestern regions are dryer.

The weather of the Buenos Aires Province is temperate with average temperatures between 13 and 17 °C. At the coast, the wind from sea cools down the nights during the summer and keeps a high humidity during the winters.

Precipitations vary from 500 mm to 1,000 mm per year on the coast, and due to the flatness of the terrain can produce flooding.

The geography of the province is crossed by occasional west winds. The southern "" produces storms and temperature drops, most notably the "Santa Rosa" storm [http://www.monte.gov.ar/planificacion/informacionutil1/climatolofia/santarosa.htm] , which takes place every year almost exactly on .

The province's economy has long been the largest in Argentina, estimated in 2006 to have been US$107.6 billion (a third of the national total). Its per capita income of US$7,780, though, was somewhat below the national average [ [http://www.iader.org.ar I.A.D.E.R ] ] and even accounting for the much lower local cost of living, this was still probably a fourth of that in the . [ [http://www.cia.gov/library/publications/the-world-factbook/geos/ar.html CIA Site Redirect — Central Intelligence Agency ] ]

Agriculture in the province is renowned around the world for its productivity, though the sector adds about 5% to the province's total economy, among the most diverse in Argentina.

Manufacturing accounts for a fourth of the province's output and is about 40% of the entire nation's.

The province's services sector is well-diversified and differs little from national trends.

Tourists, mainly from Buenos Aires, visit the Atlantic coast.There are many cities and town along the coast line that starts some 250 kilometres from Buenos Aires after the .Among them, the biggest and most important is , followed by Pinamar, Villa Gesell, Miramar and .

Other destinations include the Sierras of , and the many islands of the delta, , the Lagoon, and the city.

Lately in "estancias" ranches has become somewhat popular for foreigners visiting the province.